How TV's new queens of healthy eating are serving up hogwash. Wearing nothing but a black lace bra and matching skimpy knickers, the woman gazes down the camera lens with a come-hither look. 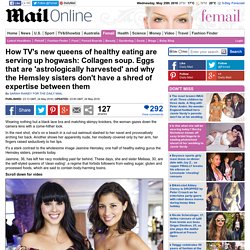 In the next shot, she's on a beach in a cut-out swimsuit slashed to her navel and provocatively arching her back. Another shows her apparently nude, her modesty covered only by her arm, her fingers raised seductively to her lips. It's a stark contrast to the wholesome image Jasmine Hemsley, one half of healthy eating gurus the Hemsley sisters, presents today. 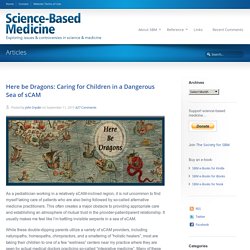 This often creates a major obstacle to providing appropriate care and establishing an atmosphere of mutual trust in the provider-patient/parent relationship. It usually makes me feel like I’m battling invisible serpents in a sea of sCAM. While these double-dipping parents utilize a variety of sCAM providers, including naturopaths, homeopaths, chiropractors, and a smattering of “holistic healers”, most are taking their children to one of a few “wellness” centers near my practice where they are seen by actual medical doctors practicing so-called “integrative medicine”. Many of these children have vague, chronic, usually non-specific complaints that are difficult to explain and thus to treat. This is unusual for two reasons. Seneff Claims GMOs Cause Concussions. Seneff Claims GMOs Cause Concussions You read that headline correctly. 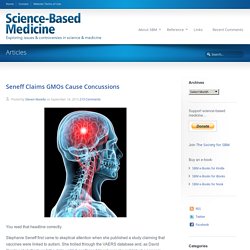 Stephanie Seneff first came to skeptical attention when she published a study claiming that vaccines were linked to autism. She trolled through the VAERS database and, as David Gorski noted, “tortured the data until it confessed.” Last year she published a paper in which she claimed glyphosate caused autism, claims which I addressed almost a year ago. Gorski also deconstructed this paper, noting, “In fact, if you look at the slides for Seneff’s talks (e.g., this one, available at her MIT web page), you’ll find a tour de force of confusing correlation with causation…” Seneff is a computer scientist who apparently is anti-vaccine and anti-GMO. From autism to concussions Last year she also published a paper, which escaped my attention until it was recently pointed out to me, claiming that glyphosate, GMOs, and other modern lifestyle factors are responsible for the recent increase in concussions. 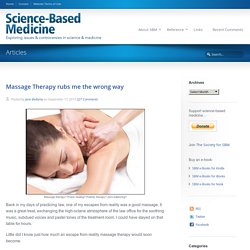 Pranic healing? Polarity therapy? Zero balancing? Back in my days of practicing law, one of my escapes from reality was a good massage. Little did I know just how much an escape from reality massage therapy would soon become. About 15 years ago, when I called to book an appointment with my favorite therapist, a recorded message offered something called “ray-kee” – at least, that is how it was pronounced. Fast forward a few years. A few more years went by. By this time, I was a fully committed SBM poster. I moved on. Same spa, different therapist. Science-Based Medicine.

What's The Harm? Colloid Drug Research Fraud Scandal. More than £70m a year could be saved from the drugs budget in England, if the government closed a legal loophole. 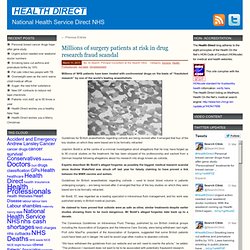 Official figures show middlemen – or wholesalers – are inflating the price of a group of drugs called “unlicensed specials” – sometimes by thousands of percent. These are often simple drugs, sold as a liquid instead of a pill to make them easy to swallow. Across England the cost of specials to the NHS has risen from £57m to £160.5m in just four years. A saving of nearly £72m could be made if all specials were limited to £75 an item, according to internal NHS sources. The problem has also been recognised in Scotland and Wales, but the relevant NHS departments were unable to provide figures.

Using Freedom of Information legislation, the BBC has obtained data that shows that the NHS in Coventry has paid anything from £50 to £1,556 for the same medicine, a blood pressure drug called Captopril Liquid Special 25mg/5mls. That is just one example in one city. “The system is complex. From: