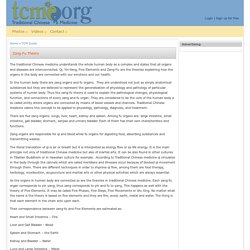 Qi, Yin-Yang, Five Elements and Zang-Fu are the theories explaining how the organs in the body are connected with our emotions and our health. In the human body there are zang organs and fu organs. They are understood not just as simply anatomical substances but they are believed to represent the generalization of physiology and pathology of particular systems of human body. Thus the zang-fu theory is used to explain the pathological changes, physiological function, and connections of every zang and fu organ. They are considered to be the core of the human body a so called entity where organs are connected by means of blood vessels and channels. Www.yogahealer.com/wp-content/uploads/2013/01/kitchari-recipe1.pdf. Www.yogahealer.com/wp-content/uploads/2013/01/kitchari-recipe1.pdf. Feng Shui Bagua (Energy Map) for the Home or Office. 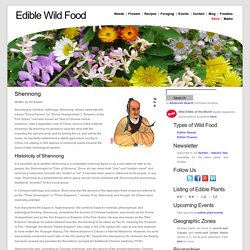 According to Chinese mythology, Shennong, whose name literally means "Divine Farmer" (or "Divine Husbandman"), "Emperor of the Five Grains," and also known as "God of Chinese herbal medicine," was a legendary ruler of China, second of the mythical emperors. By teaching his people to clear the land with fire, inventing the cart and plow, and by taming the ox, and yoking the horse, he reputedly established a stable agricultural society in China; his catalog of 365 species of medicinal plants became the basis of later herbological studies.

Historicity of Shennong It is uncertain as to whether Shennong is a completely historical figure or as a clan taken to refer to his people, the Shénnóngshì or "Clan of Shinong. " Since shì can mean both "clan" and "maiden name" and serve as a masculine honorific like "mister" or "sir", it has also been used in reference to his people. Major Accomplishments In Herbal Medicine In Agriculture In Chinese Medicine Death Resources. History of Cannabis. Portrait of the Red Emperor Shen Nung (2838 - 2698 B.C.) 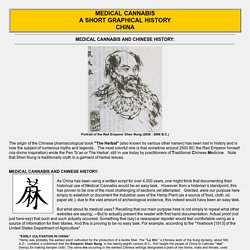 The origin of the Chinese pharmacological book "The Herbal" (also known by various other names) has been lost in history and is now the subject of numerous myths and legends. The most colorful one is that sometime around 2500 BC the Red Emperor himself (via divine inspiration) wrote the Pen Ts’ao or The Herbal, still in use today by practitioners of Traditional Chinese Medicine.

Note that Shen Nung is traditionally cloth in a garment of herbal leaves. As China has been using a written script for over 4,000 years, one might think that documenting their historical use of Medical Cannabis would be an easy task. However, from a historian’s standpoint, this has proven to be one of the most challenging of sections yet attempted. 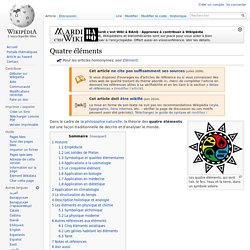 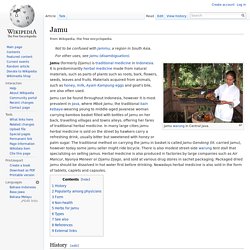 Jamu (formerly Djamu) is traditional medicine in Indonesia. It is predominantly herbal medicine made from natural materials, such as parts of plants such as roots, bark, flowers, seeds, leaves and fruits. Materials acquired from animals, such as honey, milk, Ayam Kampung eggs and goat's bile, are also often used. Jamu can be found throughout Indonesia, however it is most prevalent in Java, where Mbok Jamu, the traditional kain kebaya-wearing young to middle-aged Javanese woman carrying bamboo basket filled with bottles of jamu on her back, travelling villages and towns alleys, offering her fares of traditional herbal medicine. In many large cities jamu herbal medicine is sold on the street by hawkers carry a refreshing drink, usually bitter but sweetened with honey or palm sugar.

History[edit] Jamu was (and is) practiced by indigenous physicians (dukuns). Popularity among physicians[edit] Form[edit] Non-health[edit] Aldiko™ - eBook Reader Application for Android. Aldiko™ - eBook Reader Application for Android. Trips, CBD and Traditional Medicines: Concepts and Questions. Report of an ASEAN Workshop on the TRIPS Agreement and Traditional Medicine, Jakarta, February 2001. The triumph of jamu. European interest in Indonesian traditional healing has had its ups and downs, but in Java jamu reigns supreme, as it has for a long, long time Hans Pols Every morning across Java, women carry baskets on their backs filled with bottles containing liquid mixtures to sell on the street. 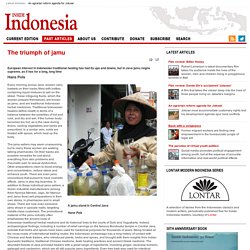 These intriguing fluids, which the women prepare themselves, are known as jamu, and are traditional Indonesian herbal medicines.