The Flight From Conversation 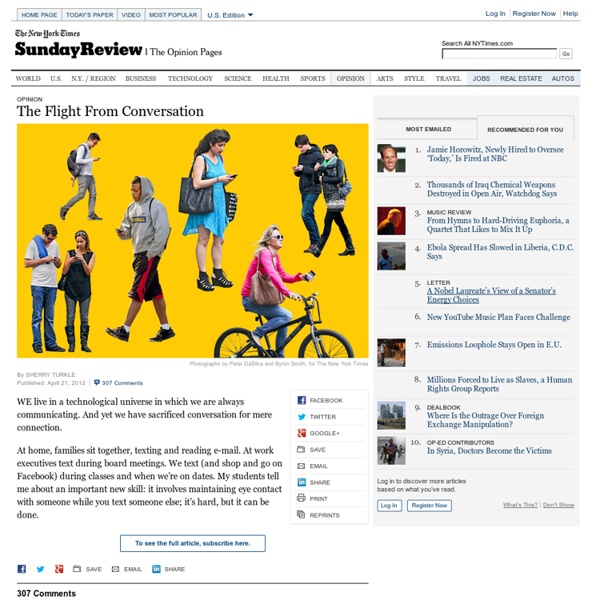 At home, families sit together, texting and reading e-mail. At work executives text during board meetings. We text (and shop and go on Facebook) during classes and when we’re on dates. My students tell me about an important new skill: it involves maintaining eye contact with someone while you text someone else; it’s hard, but it can be done. Over the past 15 years, I’ve studied technologies of mobile connection and talked to hundreds of people of all ages and circumstances about their plugged-in lives. We’ve become accustomed to a new way of being “alone together.” Our colleagues want to go to that board meeting but pay attention only to what interests them. A businessman laments that he no longer has colleagues at work. A 16-year-old boy who relies on texting for almost everything says almost wistfully, “Someday, someday, but certainly not now, I’d like to learn how to have a conversation.” Texting and e-mail and posting let us present the self we want to be. Related:  Trends

Smart, dumb, candybar, flip, and brick: a visual history of mobile phones For most of their history, mobile phones have been shrinking. Small meant portable; it even, in the not too distant past, was a sort of status symbol. Remember Motorola’s runaway hit, the ultra-thin Razr? But something funny happened on the smartphone’s way to success. Years ago, your colleagues might have laughed at you if you couldn’t fit your phone in your pocket. If screen sizes continue to grow, you might want to invest in bigger pockets, a bulkier handbag, a man purse, or even a whole new way to carry your phone. Correction: An earlier version of this article stated that the Razr was Nokia’s runaway hit.

Social intranet adoption: how to encourage usage in your organization - Intranet Blog - ThoughtFarmer | Collaborative Culture Personal InfoCloud the ANTHROPOLOGiST Transform Your Employees into Passionate Advocates - Rob Markey by Rob Markey | 10:49 AM January 27, 2012 Employee happiness is becoming a hot topic among CEOs and in boardrooms, and it’s about time. The current issue of Harvard Business Review, which includes a series of articles focused on employee happiness, is just one more sign of the growing recognition that happy, engaged employees are more productive and generate better outcomes for their companies. But there’s also a risk in all this attention to “happiness.” My colleagues and I agree with that. That’s an ambitious goal, of course. 1. Real engagement — passionate advocacy — comes from making customers’ lives richer, and there isn’t much that HR alone can do to help employees achieve that. 2. 3. And it isn’t just customer-facing personnel who can learn from customer reactions. Loyal, passionate employees bring a company as much benefit as loyal, passionate customers.

The connected company Many thanks to Thomas Vander Wal for the many conversations that inspired this post. The average life expectancy of a human being in the 21st century is about 67 years. Do you know what the average life expectancy for a company is? Surprisingly short, it turns out. In a recent talk, John Hagel pointed out that the average life expectancy of a company in the S&P 500 has dropped precipitously, from 75 years (in 1937) to 15 years in a more recent study. Why is the life expectancy of a company so low? I believe that many of these companies are collapsing under their own weight. The statistics back up this assumption. This “3/2 law” of employee productivity, along with the death rate for large companies, is pretty scary stuff. I believe we can. Historically, we have thought of companies as machines, and we have designed them like we design machines. 1. A car is a perfect example of machine design. It’s time to think about what companies really are, and to design with that in mind. 1.

Fashionable Quote T-Shirts, Hoodies, Long Sleeve Shirts, and Bags by Quote Couture™ CEOs Who Tweet Held in High Regard There may be new reasons for CEOs and CMOs to join the Twittersphere. According to a study by social media branding firm BRANDfog consumers and employees regard company leaders who engage on social media platforms positively. BRANDfog survey results indicate that consumers believe C-suite engagement in social media can benefit how they view a brand and its executive leadership. The majority of survey respondents, 78%, said CEO participation in social media leads to better communication, while 71% said it leads to improved brand image and 64% said it provides more transparency. In terms of importance, 86% of respondents rated CEO social media engagement as somewhat important, very important or mission-critical. A company’s social media presence also trickles down and influences purchase decisions. Selling social to the C-suite remains a challenge for many companies, though. Financial services firm ING Direct Canada is known for its tweeting CEO, Peter Aceto.