Bioneers - Revolution From the Heart of Nature 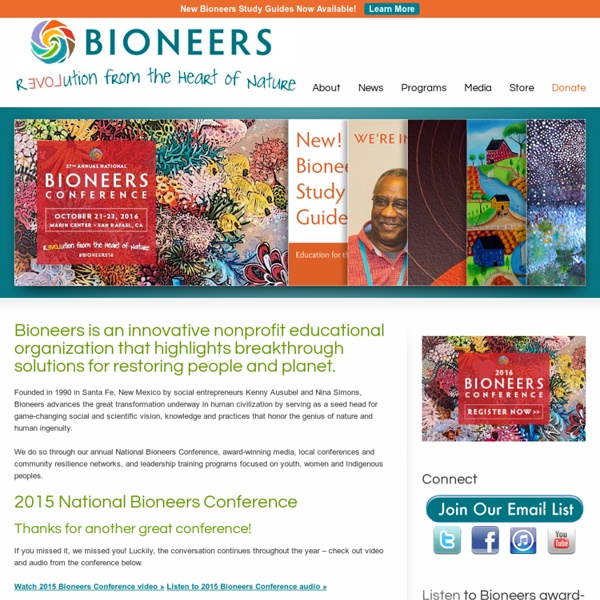 Chief Seattle's Speech of 1854 - Version 1 Version 1 (below) appeared in the Seattle Sunday Star on Oct. 29, 1887, in a column by Dr. Henry A. Smith. "CHIEF SEATTLE'S 1854 ORATION" - ver . 1 Yonder sky that has wept tears of compassion upon my people for centuries untold, and which to us appears changeless and eternal, may change. Living on the edge: ecological and cultural edges as sources of diversity for social-ecological resilience. A few summers ago, on a berry-picking expedition to a local mountain on Vancouver Island, one of us (NT) observed that by far the most productive and highest quality blueberries and huckleberries (Vaccinium ovalifolium, V. alaskaense, V. parvifolium, V. deliciosum) occurred not in the dense old growth subalpine forest, nor in the dry, hot center of a nearby clearcut, but in the area of confluence between the two, and especially at the edge of a creek. Here, right at the juncture of the forest, the creek, and the clearing, the picking was prime; buckets were filled in minutes, whereas in the dense forest and the center of the 15-year old clearcut, although the berry bushes were growing there, it would have taken hours to glean any quantity of berries. This kind of experience has been repeated among people all over the world in their search for and exploitation of the foods and materials they need for their survival. 1.

New Web Platform Launched to Accelerate Green Economy Transition Geneva, 22 January 2014 - A robust, state-of-the-art knowledge-sharing platform was launched today by the newly established Green Growth Knowledge Platform (GGKP), a diverse consortium of leading institutions and organizations working in areas related to green growth and green economy. The website is in response to increasing demand from both policy makers and the public for information on ways to achieve sustainable economic growth. Like the GGKP itself, the website - which features a searchable e-library with over 600 technical and policy resources, as well as dashboards with data and policies for 193 countries - transcends the traditional divide between economy and the environment.

Ocean Energy: Tidal and Wave Power Earth’s global oceans cover approximately 71% of the planet, roughly 3.6×10^8 km squared. It has been estimated that if humans find an efficient way to harness at least 0.2% of the potential energy within wave power and tidal power, enough energy would be generated to power the entire world. Ocean power has been utilized by humans for hundreds of years and is one of the oldest forms of energy known to us. For example, tide mills and water wheels have been used successfully to power farms, homes, factories, and electricity. This is a primitive method, but contains some of the basic principles that are being tested in modern ocean energy devices. Ocean power is a non-polluting, reliable, and predictable source of renewable energy that is abundant and accessible to the majority of the planet.

USDA Forest Service - Caring for the land and serving people. Meet James Redhouse Jr. In 2000, a young James Redhouse looked around at his high school buddies and saw they were joining the Utah National Guard, so he decided to do the same thing. But at 17 he needed his parent’s permission, which his mother somewhat reluctantly gave. One year later, in the early fall of 2001, the world changed. Eventually, Redhouse was sent to Iraq, where he suffered wounds that would send him home and earn him a Purple Heart. Today, he’s still a member of the National Guard and, when not training, works on the Dixie National Forest.

Tidal power [Tidal Power] Navigation Introduction, Tidal barrage, Current technology, Pumping, Economics, Social Implications, Environmental Aspects,Tidal streams, Current technology, Economics, Social Implications, Environmental Aspects, Conclusions Building Man Festival Imagine… if you took Burning Man (and Nowhere), Sunrise Celebration (and Off-Grid), Small World Solar Stage, City Repair‘s Village Building Convergence, the Big Green Gathering, the Global Village Construction Set, a Hexayurt village, the Small is… Festival, Uncivilisation (the Dark Mountain Festival) and a Permablitz then mixed them all together? Imagine… a festival like Burning Man but rather than creating a temporary city in the desert, building an ecovillage somewhere sensible and leaving it there. Imagine… if your favourite eco festival site that didn’t have to be taken down once the festival was over.

Megafolia Tree - Global Phoenix The Megafolia™ Tree is truly a “super specimen”. This tree has remarkable characteristics that help scrub the air of harmful pollutants, add nutrients back into the soil for faster growth of crops, and it has a very high biomass index which converts easily to clean, waste-free, economically viable renewable energy. It has the Guiness Book of World Records for the fastest growing hardwood tree, is fire retardant, has loads of medicinal benefits, and it’s absolutely beautiful. Global Phoenix is honored to be the sole nonprofit empowered to represent this tree, and we are raising funds to plant thousands of acres of this world changing gem. Read on for more details!

Five Easy Repairs to Extend the Lifespan of Your Things I have a dilemma—a New Year’s dilemma. At a time when resolutions dominate the season, resolutions are the one thing I dread. Every January, I make promises: Eat better; exercise more; save money. But if history is any indicator, I know that my grand declarations of self-betterment will likely fall to the wayside come February. Sound familiar to you? What is sustainable development · Sustainable Development Commission "Sustainable development is development that meets the needs of the present, without compromising the ability of future generations to meet their own needs." The concept of sustainable development can be interpreted in many different ways, but at its core is an approach to development that looks to balance different, and often competing, needs against an awareness of the environmental, social and economic limitations we face as a society. All too often, development is driven by one particular need, without fully considering the wider or future impacts. We are already seeing the damage this kind of approach can cause, from large-scale financial crises caused by irresponsible banking, to changes in global climate resulting from our dependence on fossil fuel-based energy sources. The longer we pursue unsustainable development, the more frequent and severe its consequences are likely to become, which is why we need to take action now. So is it all just about the environment?