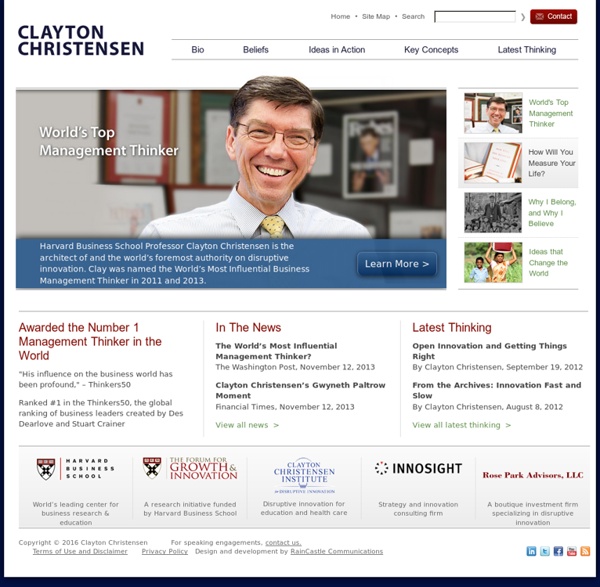 Digital Transformation: A Road-Map for Billion-Dollar Organizations | Publications Read the main study findings from the digital transformation study conducted by Capgemini Consulting and the MIT Center for Digital Business. Digital transformation – the use of technology to radically improve performance or reach of enterprises – is becoming a hot topic for companies across the globe. Executives in all industries are using digital advances such as analytics, mobility, social media and smart embedded devices – and improving their use of traditional technologies such as ERP – to change customer relationships, internal processes, and value propositions. Other executives, seeing how fast digital technology disrupted media industries in the past decade, know they need to pay attention to changes in their industries now. How can senior executives successfully lead digital transformation?

Thomas Kuhn: the man who changed the way the world looked at science | Science | The Observer Fifty years ago this month, one of the most influential books of the 20th century was published by the University of Chicago Press. Many if not most lay people have probably never heard of its author, Thomas Kuhn, or of his book, The Structure of Scientific Revolutions, but their thinking has almost certainly been influenced by his ideas. The litmus test is whether you've ever heard or used the term "paradigm shift", which is probably the most used – and abused – term in contemporary discussions of organisational change and intellectual progress. A Google search for it returns more than 10 million hits, for example. And it currently turns up inside no fewer than 18,300 of the books marketed by Amazon. The real measure of Kuhn's importance, however, lies not in the infectiousness of one of his concepts but in the fact that he singlehandedly changed the way we think about mankind's most organised attempt to understand the world.

To-Do List In Excel | TimeBubbles Race Against The Machine Moore's law Moore's law is the observation that, over the history of computing hardware, the number of transistors on integrated circuits doubles approximately every two years. The law is named after Intel co-founder Gordon E. Moore, who described the trend in his 1965 paper.[1][2][3] His prediction has proven to be accurate, in part because the law is now used in the semiconductor industry to guide long-term planning and to set targets for research and development.[4] The capabilities of many digital electronic devices are strongly linked to Moore's law: processing speed, memory capacity, sensors and even the number and size of pixels in digital cameras.[5] All of these are improving at roughly exponential rates as well. The period is often quoted as 18 months because of Intel executive David House, who predicted that chip performance would double every 18 months (being a combination of the effect of more transistors and their being faster).[9] History[edit] Gordon Moore in 2004 Network capacity.

the other side of INNOVATION - Research The only effective way to study the management of innovation initiatives is to compile in-depth, multi-year case histories. Doing so is time-consuming and expensive. It requires in-depth interviewing, followed by the meticulous process of synthesizing hundreds of pages of interview transcripts and archived documents into meaningful narratives. The Other Side of Innovation is based on an extensive ten-year study that produced the most extensive library of case studies about executing innovation initiatives in the world. Several of the case studies are summarized in this book. Subject companies include: 3M Corporation Analog Devices, Inc. 3M Corporation Vijay Govindarajan; Julie Lang Length: 4 pages Publication date: 2002 Case No. 2-0002 3M's strategy was rooted in innovation. 3M's 30 Percent Rule, where 30 percent of revenues must come from products introduced in the last four years, clarifies and drives its innovation mentality. This is not your grandfather’s tractor!

Khan Academy Digital Business at MIT | Home Network effect Diagram showing the network effect in a few simple phone networks. The lines represent potential calls between phones. The classic example is the telephone. The expression "network effect" is applied most commonly to positive network externalities as in the case of the telephone. Over time, positive network effects can create a bandwagon effect as the network becomes more valuable and more people join, in a positive feedback loop. Origins[edit] Network effects were a central theme in the arguments of Theodore Vail, the first post patent president of Bell Telephone, in gaining a monopoly on US telephone services. The economic theory of the network effect was advanced significantly between 1985 and 1995 by researchers Michael L. According to Metcalfe, the rationale behind the sale of networking cards was that (1) the cost of the network was directly proportional to the number of cards installed, but (2) the value of the network was proportional to the square of the number of users.

Innovation from the Edge Some time ago, Mathew Ingram of Gigaom asked in a post why it is that the NY times and other newspapers don’t create new innovations, like daily deals . The question inspired an impressive variety of comments, from those who denounced newspapers as “old fashioned” and “change averse” to those who pointed out that a newspaper’s primary mission is journalistic. Whatever your sentiments about newspapers, clearly the problem isn’t exclusive to them. Why didn’t Yahoo invent the search engine? Corporations are not People Most people assume that large organizations simply don’t want to innovate because they like the status quo. I don’t want to say that doesn’t happen, but if that were so, it would be an easy problem to fix. An alternative explanation is both more likely and more interesting: people within organizations pursue worthy individual actions that result in poor global outcomes. It is a mistake to anthropomorphize organizations. The Innovation Ecosystem The Cybernetics of Action

Lumosity Science - the Human Cognition Project The Human Cognition Project (HCP) is a collaboration between Lumosity’s in-house science team and various academic scientists, clinicians, and educators interested in understanding and exploring human cognitive abilities. HCP researchers receive free access to Lumosity’s tools and, in certain cases, limited access to select portions of Lumosity’s database of cognitive game performance. Currently, there are 43 ongoing HCP studies exploring topics such as age-related cognitive decline, interventions for PTSD, and the relationship between physical exercise and Lumosity training. The Research Behind Lumosity Learn about the science behind Lumosity's training program. Learn More Get Involved in the HCP Researchers, educators, and clinicians are invited to submit a research proposal and apply to the HCP today. Learn More