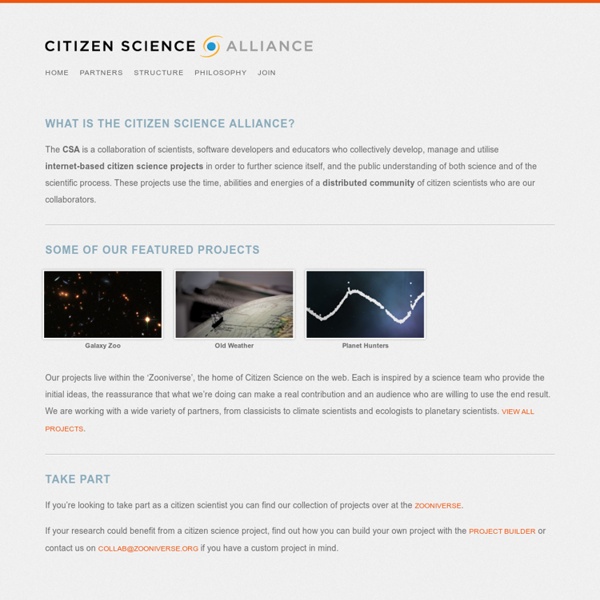 Icelanders approve their crowdsourced constitution — European technology news Citizen Science What is a Citizen Naturalist? Citizen naturalists are people concerned about the environment who choose to help make a difference both locally and nationally. They spend time outside, observing nature with a critical lens. Anyone can be a citizen naturalist – all you need is a passion for nature and helping your community! Some examples of activities commonly performed by citizen naturalists: Cleaning up a local park or stream. Citizen Science Citizen science is where the public volunteers time to assist scientists in their research. Citizen science programs vary in type and scope. Looking for a Way to Get Involved? Fun with Frogs! The Beauty of BirdsThe Cornell Lab of Ornithology manages 12 bird citizen science programs, including Project Feederwatch, NestWatch and eBird. Fabulous Firefly FestivitiesThis summer, Boston's Museum of Science wants you to monitor fireflies. Monarch Mayhem! National Wildlife Federation’s Wildlife Watch Visit Wildlife Watch today!

These kickass games let you do real-life science I like that there's all these games out there that actually contribute to real science. It's nice to know that I'm Contributing to Science! But they all end the same way: I just spent 25 minutes mapping craters on the moon, and that's enough for this month. While I used a crowd sourced example, the same can be said for most of these games. I haven't tried them all, so maybe one is, like, super-duper awesome. But mostly they're ... kinda ... boring. I'm not doing science. What I want to see is a 'truer' citizen science website, something that allows your average Jane or Joe to come up with questions, propose testable hypothesis, and carry out experiments. I think it would be great if there was a place for people to go where they can ask these sorts of silly questions, formulate hypothesis, make predictions, and test them.

Culture in the Classroom Printer-friendly version Educators today hear a lot about gaps in education – achievement gaps, funding gaps, school-readiness gaps. Still, there's another gap that often goes unexamined: the cultural gap between students and teachers. "A bunch of teachers here, they think they know what's wrong with us. But they don't know. Most of us in the education profession are white, middle-class, monolingual-English speakers. But the truth is: culture matters. Culture isn't just a list of holidays or shared recipes, religious traditions, or language; it is a lived experience unique to each individual. To truly engage students, we must reach out to them in ways that are culturally and linguistically responsive and appropriate, and we must examine the cultural assumptions and stereotypes we bring into the classroom that may hinder interconnectedness. Look For: What are some of the myths about Asian American students in the classroom that Diane speaks about? Go Deeper: Reflect On: Look for: Papers Books

Crowdsourcing Crowdsourcing is a sourcing model in which individuals or organizations obtain goods and services. These services include ideas and finances, from a large, relatively open and often rapidly-evolving group of internet users; it divides work between participants to achieve a cumulative result. The word crowdsourcing itself is a portmanteau of crowd and outsourcing, and was coined in 2005.[1][2][3][4] As a mode of sourcing, crowdsourcing existed prior to the digital age (i.e. "offline").[5] There are major differences between crowdsourcing and outsourcing. Some forms of crowdsourcing, such as in "idea competitions" or "innovation contests" provide ways for organizations to learn beyond the "base of minds" provided by their employees (e.g. Definitions[edit] The term "crowdsourcing" was coined in 2005 by Jeff Howe and Mark Robinson, editors at Wired, to describe how businesses were using the Internet to "outsource work to the crowd",[1] which quickly led to the portmanteau "crowdsourcing."

Solve Puzzles for Science | Foldit Microwork Microwork is a series of small tasks which together comprise a large unified project, and are completed by many people over the Internet. [1] [2] Microwork is considered the smallest unit of work in a virtual assembly line. [3] It is most often used to describe tasks for which no efficient algorithm has been devised, and require human intelligence to complete reliably. The term was developed in 2008 by Leila Chirayath Janah of Samasource. [4] [5] Microtasking[edit] Microtasking is the process of splitting a job into its component microwork and distributing this work over the Internet. Good candidates for microtasks have the following characteristics: they are large volume tasks, they can be broken down into tasks that are done independently, and they require human judgement.[6] Microtasks are distinguished from macrotasks which typically can be done independently, they require a fixed amount of time and they require a specialized skill. Services[edit] Uses[edit] Advantages[edit]