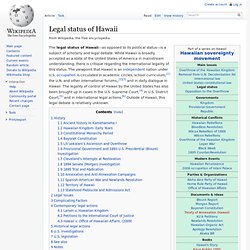 While Hawaii is broadly accepted as a state of the United States of America in mainstream understanding, there is critique regarding the international legality of this status. The viewpoint that Hawaii is an independent nation under U.S. occupation is circulated in academic circles, school curriculum;[1] the U.N. and other international forums,;[2][3] and in daily dialogue in Hawaii. Civil Code of the Hawaiian Islands - ARTICLE X. §458. 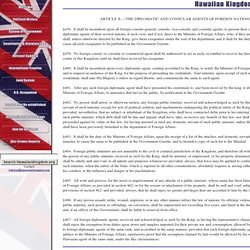 It shall be incumbent upon all foreign consuls-general, consuls, vice-consuls, and consular agents, to present their commissions through the diplomatic agents of their several nations, if such exist, and if not, direct to the Minister of Foreign Affairs, who, if they are found to be regular, shall, unless otherwise directed by the King, give them exequaturs under the seal of his department; and it shall be the duty of said minister to cause all such exequaturs to be published in the Government Gazette. §459. 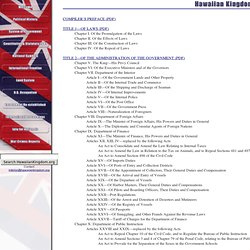 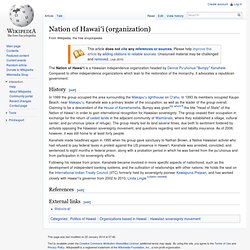 Compared to other independence organizations which lean to the restoration of the monarchy, it advocates a republican government. In 1989 the group occupied the area surrounding the Makapuʻu lighthouse on Oʻahu. In 1993 its members occupied Kaupo Beach, near Makapuʻu. Ka Lahui Hawaii. Haunani-Kay Trask : Native Hawaiian Speaker and Professor. Mililani Trask. Haunani-Kay Trask : Native Hawaiian Speaker and Professor. Hawaiian sovereignty movement. The Hawaiian sovereignty movement (Hawaiian: ke ea Hawai‘i) is a political movement seeking some form of sovereignty for Hawai'i. 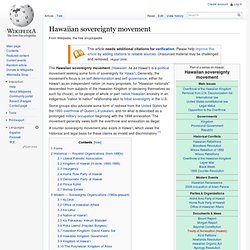 Generally, the movement's focus is on self-determination and self-governance, either for Hawaiʻi as an independent nation (in many proposals, for "Hawaiian nationals" descended from subjects of the Hawaiian Kingdom or declaring themselves as such by choice), or for people of whole or part native Hawaiian ancestry in an indigenous "nation to nation" relationship akin to tribal sovereignty in the U.S. Some groups also advocate some form of redress from the United States for the 1893 overthrow of Queen Liliʻuokalani, and for what is described as a prolonged military occupation beginning with the 1898 annexation. The movement generally views both the overthrow and annexation as illegal. A counter-sovereignty movement also exists in Hawaiʻi, which views the historical and legal basis for these claims as invalid and discriminatory.[1] Forms[edit] Insurgency[edit]

Polynesian Kingdom of Atooi. MAHEALANI with RICHARD FINE: The Sovereign Principality of Aloha. Kingdom of Hawaii PSA announcing END of US rule- formal re-instatement of Hawaiian Nation. Kalahui Hawaii: Documenting the State of Aloha. February 17, 2011 A new documentary presents the history and culture of Kalahui Hawaii showing how nascent American imperialism and commercial interests led to the end of Hawaiian independence. 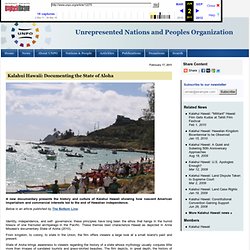 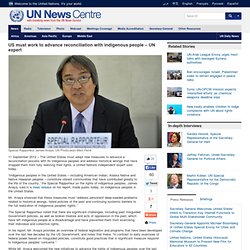 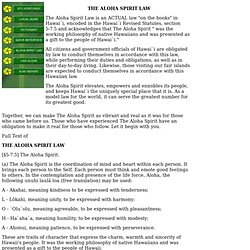 Those who have experienced The Aloha Spirit have an obligation to make it real for those who follow. Let it begin with you. [§5-7.5] The Aloha Spirit. (a) The Aloha Spirit is the coordination of mind and heart within each person. It brings each person to the Self. A - Akahai, meaning kindness to be expressed with tenderness; Hawaii is not legally a state! "The rule of law is simply the rule of bandits who are in control of the United States. 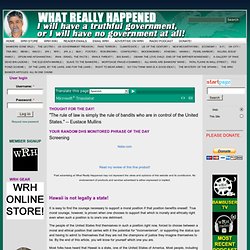 " -- Eustace Mullins Screening Paid advertising at What Really Happened may not represent the views and opinions of this website and its contributors. No endorsement of products and services advertised is either expressed or implied. Hawaii is not legally a state! It is easy to find the courage necessary to support a moral position if that position benefits oneself. The people of the United States find themselves in such a position right now, forced to choose between a moral and ethical position that carries with it the potential for "inconvenience", or supporting the status quo and having to admit to themselves that they are not the champions of justice they imagine themselves to be. 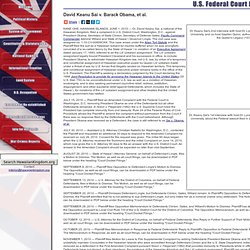