Our Professional Chess Coaches. The ZugZwang Way is the facilitation of the right environment for learning to thrive. 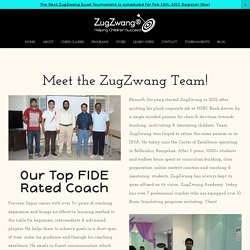 Where students are mentored, not lectured. Where practical experimentation takes precedence over memorization of facts. Where intrinsic motivation reigns supreme. The “ZugZwang Way” is a way of learning. A way of life. ZugZwang Academy was founded for the right reasons - passion for mentoring children & intellectual development through learning. ZugZwang Academy was founded by Bharath Divyang, an IIT-IIM alumnus. Founders Message to Parents: “If you desire to invest in your child’s mental & intellectual growth, there is no better tool to facilitate that development than scholastic chess. Code of Ethics & Integrity ZugZwang maintains the highest ethical and moral standards and everyone associated with ZugZwang has been mentored to imbibe and live these standards. Chess coaching kids. Zugzwang Chess. Live Chess Event at Chessgames.com. Campionato del Mondo 2016. “Ho paura che tu abbia bisogno di vedere Cf2! 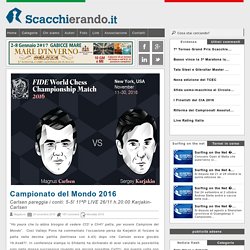 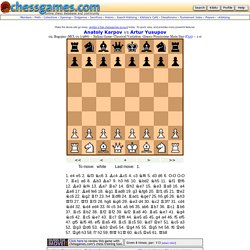 Giuoco Pianissimo Main line (C53) · 1-0 Spot an error? Please submit a correction slip and help us eliminate database mistakes! Watch "Sergey" - The Chess Prodigy Online. Reprieve. The players had had a day to recover from their exertions in game 8, and to earth themselves again from two dramatically different perspectives. 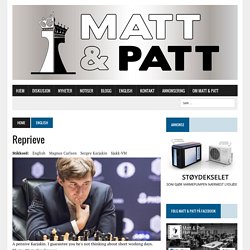 Both were presumably not expecting to be in this position when preparing for this match, though I think it is a safe bet that the match score was more of a surprise to the champion than the challenger. Believing you can take the lead is part of their job, preparing for adversity is sometimes not on a champion’s agenda. by Jonathan Tisdall Business as usual? Carlsen did not talk to the Norwegian press, but went straight to his manager Espen Agdestein while Karjakin was in the mixed zone. There are some hints about the mood in the Carlsen camp from insiders speaking to Norwegian media as the game begins.

«It’s too early to go into panic mood,» the Big Dane says, «world championship matches go back and forth. Sister Ellen told VGTV that the match situation meant Magnus was under «a bit more pressure than usual, but things were OK. Peace predictions. Magnus (2016) The Houdini Of Chess Has Escaped Again At The World Championship. The French word for chess is échecs. 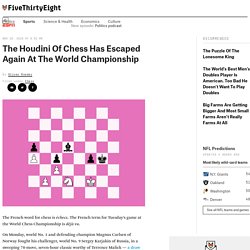 The French term for Tuesday’s game at the World Chess Championship is déjà vu. On Monday, world No. 1 and defending champion Magnus Carlsen of Norway fought his challenger, world No. 9 Sergey Karjakin of Russia, in a sweeping 78-move, seven-hour classic worthy of Terrence Malick — a draw for the ages. On a gloomy Tuesday in lower Manhattan, the players sat down in front of 32 pieces and 64 squares and did it again. More Sports The result was a 94-move, six-hour-plus draw that kept the best-of-12 world championship match tied for yet another game. Harry Houdini was known to escape after being handcuffed, nailed into a wooden box and dumped into the East River. Tuesday’s game saw a familiar opening, one that’s becoming de rigueur in this match: the Ruy Lopez, in which each side plays its king’s pawn, each develops a knight, and white attacks black’s knight with a bishop. This is like yesterday.

He slid his pawn down a square, to f4. GLL At the Chess Match. Magnus Carlsen of Norway and Sergey Karjakin of Russia are midway through their world championship match in New York City. 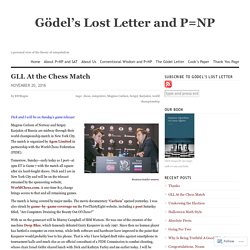 The match is organized by Agon Limited in partnership with the World Chess Federation (FIDE). Tomorrow, Sunday—early today as I post—at 2pm ET is Game 7 with the match all square after six hard-fought draws. Dick and I are in New York City and will be on the telecast streamed by the sponsoring website, WorldChess.com. A one-time $15 charge brings access to that and all remaining games.

The match is being covered by major media. The Games and Some Stats The players occupy a cubicle behind a partition from the main audience. The games start at 2pm. Match di campionato del mondo, settima e ottava partita.