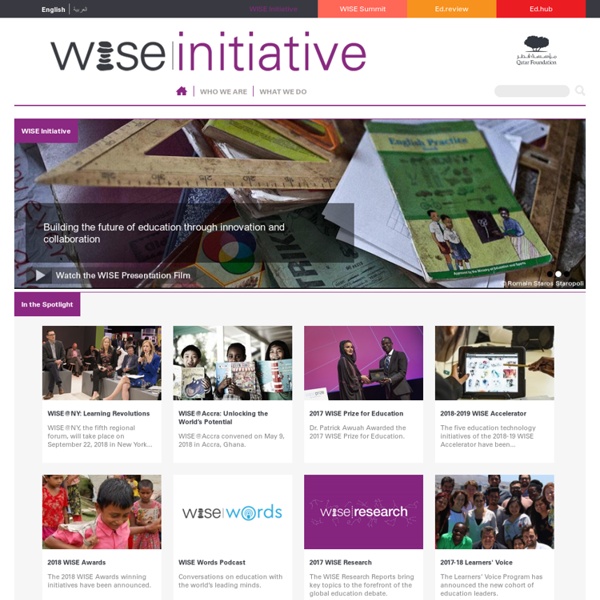 Edu on Tour Hey yo. Are you one of those kids? With superpowers to transform education to an exciting adventure? Or do you dream that your kids will be able to use their superpowers to live the change? And would like to experience your personal journey in an engaging way? WISE focuses on EdTech and innovation - The Peninsula Qatar Doha: The World Innovation Summit for Education (WISE) took part in the International Economic Forum of the Americas (IEFA) in Montreal, Canada. The three-day gathering brought together 4,000 international leaders under the theme ‘Shaping a New Era of Prosperity’. More than 200 speakers presented insights on major global economic issues, discussing their social, cultural and political impacts. In a roundtable discussion on technology and innovation in education, Stavros N Yiannouka, CEO, WISE, noted the dramatic potential of emerging technologies in extending education access to the most vulnerable and marginalised.

John Taylor Gatto John Taylor Gatto[1] (born December 15, 1935[2]) is an American author and former school teacher with nearly 30 years of experience in the classroom. He devoted much of his energy to his teaching career, then, following his resignation, authored several books on modern education, criticizing its ideology, history, and consequences. He is best known for the underground classic "Dumbing Us Down: the Hidden Curriculum of Compulsory Schooling", and his magnum opus "The Underground History of American Education: A Schoolteacher’s Intimate Investigation Into the Problem of Modern Schooling". He was named New York City Teacher of the Year in 1989, 1990, and 1991, and New York State Teacher of the Year in 1991.[3] Biography[edit]

How Canada became an education superpower Image copyright Reuters When there are debates about the world's top performing education systems, the names that usually get mentioned are the Asian powerhouses such as Singapore and South Korea or the Nordic know-alls, such as Finland or Norway. But with much less recognition, Canada has climbed into the top tier of international rankings. » How I Was Able to Ace Exams Without Studying Editor’s note: This is a guest post from Scott Young of ScottYoung.com. In high school, I rarely studied. Despite that, I graduated second in my class.

EdTech DISRUPTORS Posted by Rianna Newman | August 20, 2017 | Product news #products#edtech#top-picks Seebox – preparing our children for the coming AI revolution! According to experts, AI or artificial intelligence will be the most disruptive tech trend in the history of IT, as well as in most other industries. The coming AI revolution will have significant consequences and will impact our own but more importantly our children’s lives. 50 Eye-Opening Unschooling Blogs Unschooling is an alternative education system that supports natural, interest-led learning at home. Whether you want to learn more about unschooling for your own research or child rearing projects, network with other parents who unschool their kids, or adopt some of the alternative learning philosophies to augment your own formal education, check out these 50 eye-opening blogs. General To find out more about what unschooling really means, visit these blogs. Tips and Lessons These blogs are great resources for finding practical information about unschooling, including lesson plans and guides.

People on the move: growing mobility, increasing diversity by Marc FusterConsultant, OECD Directorate for Education and Skills In August 2015, a newspaper published a story about Sam Cookney’s commute to work. Pretty boring, one would think, as long commutes are nothing new for most of us. However, Sam’s story is not so common. He works in London and commutes, several times per month, from Barcelona! International human mobility is on the rise. The Bad Habits You Learn in School - John Coleman by John Coleman | 9:00 AM August 2, 2012 It can be tough to help new college graduates adjust to the real world. Joey, a 22-year-old, Ivy League graduate who joined one of my consulting teams, was a great example.