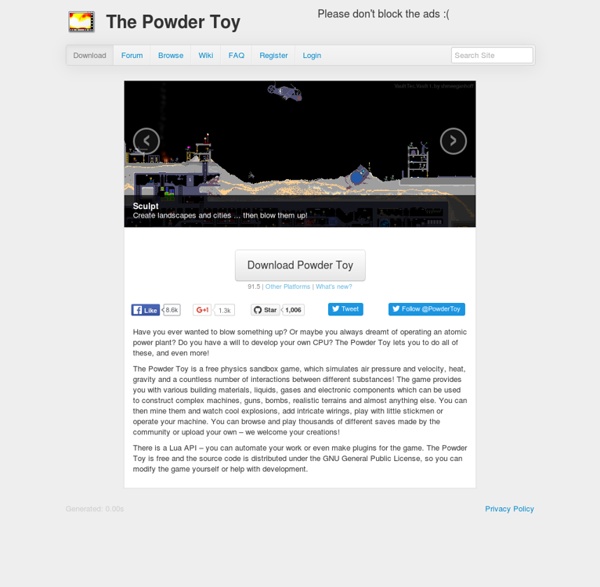 Lace Anchors 2.0: A simple design for simple people. by Charles Harris Are you tired of your shoelaces? It seems as if it's a never ending cycle of tie and untie. How about those of us that double knot, that makes for some fun challenges sometimes doesn't it? Usually it's my kids shoes. Jigs@w Puzzle 2 Store Room Here you manage your jigsaws, Play Room play, Create Room create your own jigsaws, Gallery Room exhibit completed jigsaws. Jigs@w Puzzle is a truly realistic jigsaw puzzle game which has everything you need to create and play great-looking puzzles. The game provides a very comfortable puzzling environment and superb graphics. The Powder Toy Portable physics sandbox game The Powder Toy is a game of physics and fluid mechanics. You can play with different materials whose properties and influences are simulated.

Buying a Mobile Phone: 18 Questions to Ask What to look for, what to ask and what to avoid when shopping for a smartphone, feature phone or basic cell phone. You or someone in your family needs or wants to buy a new mobile phone. Selecting the right one shouldn’t be too hard, right? Guess again.

Vendor recipes Example of the vendor recipe system The vendor recipe system allows the player to sell items to any town vendor in exchange for a multitude of currency items and equipment. Each recipe requires semi-specific items or combinations of items be put into the sell window at the same time, and the outcome will change based on any recipes that have been matched. Unless noted otherwise, each item may only be involved in a single recipe at a time.

Panoply panoply \PAN-uh-plee\, noun: 1. A splendid or impressive array. ... Panoply plots geo-referenced and other arrays from netCDF, HDF, GRIB, and other datasets. With Panoply 4 you can: Our lander’s asleep Posted on 15/11/2014 by Daniel With its batteries depleted and not enough sunlight available to recharge, Philae has fallen into 'idle mode' for a potentially long silence. In this mode, all instruments and most systems on board are shut down. "Prior to falling silent, the lander was able to transmit all science data gathered during the First Science Sequence," says DLR's Stephan Ulamec, Lander Manager, who was in the Main Control Room at ESOC tonight. "This machine performed magnificently under tough conditions, and we can be fully proud of the incredible scientific success Philae has delivered." Contact was lost at 00:36 UTC / 01:36 CET, not long before the scheduled communication loss that would have happened anyway as Rosetta orbited below the horizon.

MLGnom's osu! skins MLGnom's osu! skins Click images for the skin thread, Quick Download button will download the latest version directly. Quick Download Tracker What is Tracker? Tracker is a free video analysis and modeling tool built on the Open Source Physics (OSP) Java framework. It is designed to be used in physics education. Tracker video modeling is a powerful way to combine videos with computer modeling. STEP ESA is developing free open source toolboxes for the scientific exploitation of Earth Observation missions under the the Scientific Exploitation of Operational Missions (SEOM) programme element. STEP is the ESA community platform for accessing the software and its documentation, communicating with the developers, dialoguing within the science community, promoting results and achievements as well as providing tutorials and material for training scientists using the Toolboxes. The ESA toolboxes support the scientific exploitation for the ERS-ENVISAT missions, the Sentinels 1/2/3 missions and a range of National and Third Party missions. The three toolboxes are called respectively Sentinel 1, 2 and 3 Toolboxes and share a common architecture called SNAP.

Mars24 Sunclock The Mars24 software displays a Mars sunclock, a graphical representation of the planet Mars showing its current sun- and nightsides, along with a numerical readout of the "standard" Mars time as well lander and other local times. Other displays include a plot showing the relative orbital positions of Mars and Earth and a diagram showing the solar angle and path for a given location on Mars. Mars24 is a cross-platform application that runs on Macintosh, Windows, Linux and other desktop computers. The current version of Mars24 is 7.1.1, released 2015-12-30. Get Mars24 Mars24 requires a computer with a Java SE 7 or 8 runtime environment installed.