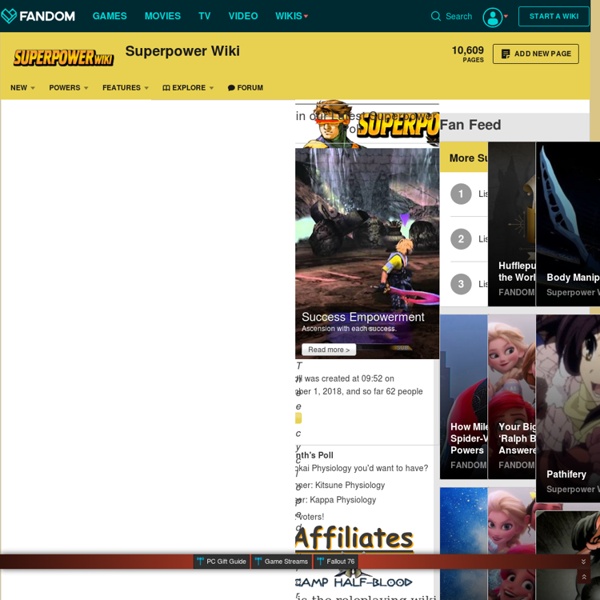 Savant Syndrome Savant Syndrome Dave Hiles # What is Savant Syndrome? Savants are people who despite serious mental or physical disability have quite remarkable, and sometimes spectacular, talents. Earth - The bizarre beasts living in Romania's poison cave In the south-east of Romania, in Constanța county close to the Black Sea and the Bulgarian border, there lies a barren featureless plain. The desolate field is completely unremarkable, except for one thing. Below it lies a cave that has remained isolated for 5.5 million years.

List of fictional medicines and drugs The use of fictional medicine and drugs has history in both fiction (usually fantasy or science fiction) and the real-world. In fiction, drugs and medicine have served as analogues to real-world drugs, giving color and depth to the fictional world. They are often included by authors in order to create or to reduce the utopian/ideal nature of their fictional world[1] and to introduce harsh realism and dystopia.[2][3] In the real world, fictional drugs have been used in scientific studies as markers to determine unreliability for survey participants who are asked to provide their history of drug usage.[4][5] The following list of fictional medicines and drugs is limited to drugs appearing in works of fiction. Some of the listed items may be used as both medicine and recreation or in other capacities, but fictional works are often vague on such distinctions. Grouping is made according to primary usage within the fictional work.

Archetypes Revisited: Burned-Out Mage, 5e style Way back in SR1, there was a Burned out Mage archetype. He was pretty awesome in a weird way. Poor guy burned out most of his magical ability on cyber, and this guy’s itching for some Focus addiction as well(which, well, he has.) List of psychic abilities This is a list of psychic abilities that have been attributed to real-world people. Many of these are also known as extrasensory perception or sixth sense. There is no evidence that psychic abilities exist, and they are not recognized by the scientific community. Superhuman abilities from fiction are not included. Jump up ^ Fontana, David (2005). Is There an Afterlife: A Comprehensive Review of the Evidence. What I Learned Running D&D 5e from Level 1 to 20: Sly Flourish by Mike Shea on 4 April 2016 Since the release of the 5th Edition of Dungeons & Dragons I have had the opportunity to run a full campaign spanning levels 1 to 20. During this campaign, we ran through the two Tyranny of Dragons adventures, Hoard of the Dragon Queen and Rise of Tiamat and extended beyond the Sword Coast into the depths of the Nine Hells where our heroes cut down tremendous foes, including a few from Kobold Press's upcoming Tome of Beasts. Finally, at level 20, our heroes faced the fully powered goddess of dragons herself, Tiamat. This experience gave us a wide-ranging view of D&D 5e, a better view than we had when 5e was first released. Before we had assumptions.

List of superhuman features and abilities in fiction Origins Examples of ways in which a character has gained the ability to generate an effect. Methods Examples of methods by which a character generates an effect. Powers Superpower interaction The Vintyri™ Cartographic Collection The Campaign Cartographer 3+ edition. The installation of the CC3+ version requires special steps. First download and read the installation guide! Download: (5.599 MB) Then download the main file: Download: (347.690 MB)