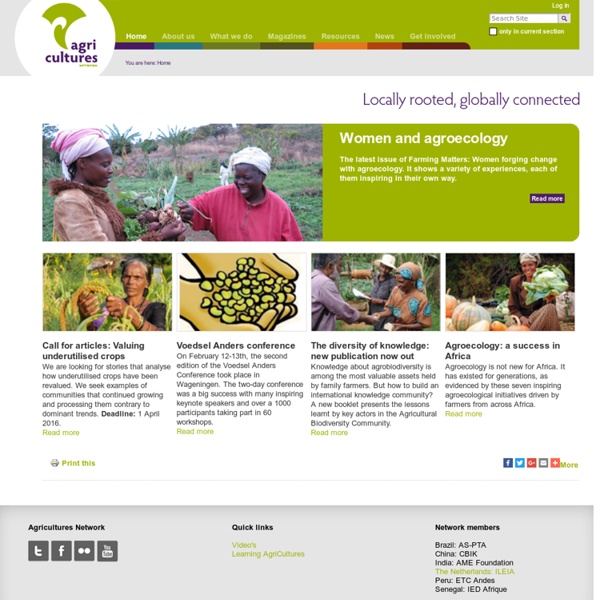 RUCHI - Rural Centre for Human Interests Centre for Indian Knowledge Systems Just Change India - Welcome to JC Just Change ......... A grassroots response to the global economy that has left the vast majority of people powerless, with little or no control over the factors that influence their lives. With growth and financial gain having become the driving force behind all economic activity, this faceless market economy has slowly eroded our sense of community. This radical trade initiative that links the local and global, goes beyond earlier initiatives like the Fair Trade movement and producer cooperatives, that have tried to address the problem of unfair markets. Just Change was born in India among the adivasi people of the Nilgiri Mountains as a response to the crash in tea prices.

The Rigoberta Menchu Tum Foundation Prolinnova | Teaching and Learning for a Sustainable Future | Module 11: Indigenous knowledge & sustainability Introduction Sophisticated knowledge of the natural world is not confined to science. Human societies all across the globe have developed rich sets of experiences and explanations relating to the environments they live in. Source: Nakashima, D., Prott, L. and Bridgewater, P. (2000) Tapping into the world’s wisdom, UNESCO Sources, 125, July-August, p. 12. Indigenous knowledge is the local knowledge that is unique to a culture or society. Indigenous people have a broad knowledge of how to live sustainably. This module illustrates ways that indigenous knowledge may be integrated into education and thereby, bring the benefits of helping to ‘sustain’ indigenous knowledge and societies to all. Objectives Activities References Bates P., Chiba, M., Kube, S. and Nakashima, D. (2009) Learning and Knowing in Indigenous Societies Today, UNESCO, Paris Grenier, L. (1998) Working with Indigenous Knowledge: A Guide for Researchers, IDRC, Canada. Johnston, A.M. (2005) Is the Sacred for Sale. Internet Sites

Nutrition in the garden A community garden at Griffith University gives local refugee and migrant communities in Logan and Beaudesert the opportunity to increase self-reliance and have social interaction thereby improving mental health and boosting their self-esteem. The project also aims to encourage learning about nutrition, to foster healthy eating habits and to involve the communities in physical activity to increase their fitness. The garden offers an opportunity to newly arrived refugees and migrants to participate in familiar farming activities, grow traditional foods and develop a sense of being connected to their new community. Various communities work on the gardens together. They include students from Griffith University and members of the Burundian, Congolese, Sudanese and Pacific Islander communities. Griffith University is working in close partnership with Assisting Collaborating Community Employment Support Services on this project. Identifying a need Consulting the communities The project Funding

Theory U Introduction Theory U proposes that the quality of the results that we create in any kind of social system is a function of the quality of awareness, attention, or consciousness that the participants in the system operate from. Since it emerged around 2006, Theory U has come to be understood in three primary ways: first as a framework; second, as a method for leading profound change; and third, as a way of being - connecting to the more authentic of higher aspects of our self. Shifting the Inner Place from Which We Operate During an interview, Bill O’Brien, the late CEO of Hanover Insurance, summarized his most important insights from leading transformational change in his own company. When Otto first heard Bill O’Brien say that he thought, “What do I really know about this inner place? Fig. 1: The Blind Spot of Leadership Leading From the Emerging Future We realized that this second type of learning—learning from the emerging future—not only had no methodology, but also had no real name.

The Elders (organization) The Elders is an international non-governmental organisation of public figures noted as elder statesmen, peace activists, and human rights advocates, who were brought together by Nelson Mandela in 2007. They describe themselves as "independent global leaders working together for peace and human rights". The goal Mandela set for the Elders was to use their "almost 1,000 years of collective experience" to work on solutions for seemingly insurmountable problems such as climate change, HIV/AIDS, and poverty, as well as to "use their political independence to help resolve some of the world's most intractable conflicts".[3] The Elders is chaired by Kofi Annan and consists of eleven Elders and one honorary Elder.[1] Desmond Tutu served for six years as chair before stepping down in May 2013, and remains an Honorary Elder.[4] At the launch ceremony, an empty chair was left on stage for Aung San Suu Kyi, the human rights activist who was a political prisoner in Burma/Myanmar at the time.