The Museum of Hoaxes 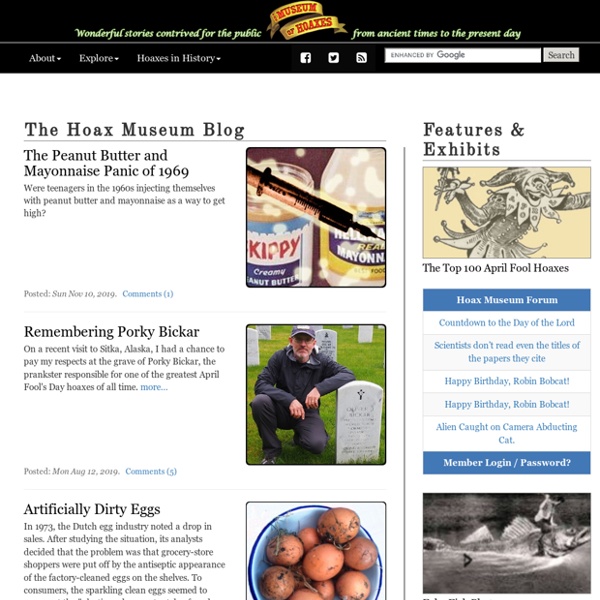 Does Your Online Marketing Look Fake Does Your Online Presence Pass the Truth Test? What’s the fastest-growing marketing trend on the Internet? I’m sad to say it’s the “fakeosphere.” Yes, fake blogs (called “flogs”), fake web news sites and fake testimonials. They look like the real thing, right down to comments posted by “bloggers” and their supposed readers. Taking On Gun Control Last Updated: Tuesday 04 March, 2008 21:41 Attention students: Look for items marked with the check-mark for reference materials for school essays, papers and debates. Disclaimer If you or a loved one is a victim of gun violence, please read the disclaimer page.

Digital Literacy - Fake Websites Digital Literacy - Fake Websites by Susan Stephenson, www.thebookchook.com Lots of us, kids included, tend to take websites on face value. If Google brings it to us, it must be true. » wash your bowl There’s a famous Zen story that goes: A monk told Joshu, “I have just entered the monastery. Please teach me.” Joshu asked, “Have you eaten your rice porridge? The monk replied, “I have eaten.” Joshu said, “Then you had better wash your bowl.” Fake sites 2 Introduction to fake websites Librarians and educators need to be able to illustrate to students and users alike that websites cannot always be trusted to provide truthful and accurate data. This page provides examples of websites that are full of lies, inaccuracies or false information - either for amusement or for more worrying reasons. The list does not include phishing sites however; these are intended to fool a person into believing that they are visiting a legitimate bank site for example; there are already plenty of links to these online already. Fake websites - scientific and commercial All of the following websites are, to the best of my knowledge fake sites, spoof sites or parodies of 'real' sites.

Loose Connections - A New Sith, or Revenge of the Hope If we accept all the Star Wars films as the same canon (as it seems we must) then a lot that happens in the original films has to be reinterpreted in the light of the prequels. As we now know, the rebel Alliance was founded by Yoda, Obi-Wan Kenobi and Bail Organa. What can readily be deduced is that their first recruit, who soon became their top field agent, was R2-D2. Consider: at the end of Revenge of the Sith, Bail Organa orders 3PO's memory wiped but not R2's. He would not make the distinction casually.

Facts About Dihydrogen Monoxide Dihydrogen Monoxide (DHMO) is a colorless and odorless chemical compound, also referred to by some as Dihydrogen Oxide, Hydrogen Hydroxide, Hydronium Hydroxide, or simply Hydric acid. Its basis is the highly reactive hydroxyl radical, a species shown to mutate DNA, denature proteins, disrupt cell membranes, and chemically alter critical neurotransmitters. The atomic components of DHMO are found in a number of caustic, explosive and poisonous compounds such as Sulfuric Acid, Nitroglycerine and Ethyl Alcohol. The True History of Fake News In the long history of misinformation, the current outbreak of fake news has already secured a special place, with the president’s personal adviser, Kellyanne Conway, going so far as to invent a Kentucky massacre in order to defend a ban on travelers from seven Muslim countries. But the concoction of alternative facts is hardly rare, and the equivalent of today’s poisonous, bite-size texts and tweets can be found in most periods of history, going back to the ancients. Procopius, the Byzantine historian of the sixth century AD churned out dubious information, known as Anecdota, which he kept secret until his death, in order to smear the reputation of the Emperor Justinian after lionizing the emperor in his official histories. Although pasquinades never disappeared, they were succeeded in the seventeenth century by a more popular genre, the “canard,” a version of fake news that was hawked in the streets of Paris for the next two hundred years. The Gallic Queen is partial to the English.

Ithaca Myths: The legendary story of Odysseus The word Odyssey has come to mean a journey of epic proportions. The word comes from Homer's epic poem The Odyssey, written in the 8th century BC and it is a sequel to Homer's other epic poem, The Iliad, which describes the last days of the great Trojan War. The Odyssey speaks of Odysseus' adventures that delay by a decade the return to his beloved homeland, Ithaca. The internet is full of fake news, and there may not be a way to fix it Fake news. The internet is full of it, and Facebook, for one, is making a big push to find it, flag it and make sure that people know what they’re reading. But not everyone is convinced that Facebook — or anyone else — can actually improve the internet’s fake news problem. A new study from Pew Research Center, which surveyed more than 1,000 “internet and technology experts” like professors, authors, and technologists, found that people are split on whether or not the internet’s fake news issue will be resolved. Of those polled, 51 percent believe the “information environment will not improve” in the next 10 years, while 49 percent believe it will. The fake news pessimists believe that technology just moves too fast for humans to catch up with bad actors, according to the findings.