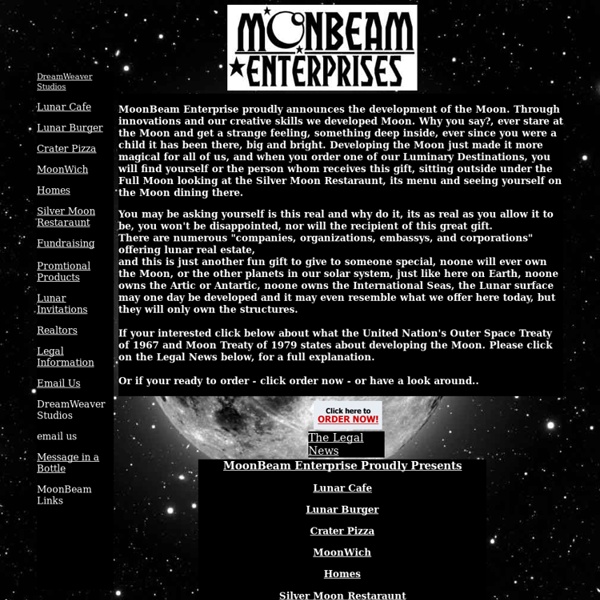 MoonBeam Enterprise proudly announces the development of the Moon. Through innovations and our creative skills we developed Moon. Why you say?, ever stare at the Moon and get a strange feeling, something deep inside, ever since you were a child it has been there, big and bright. Developing the Moon just made it more magical for all of us, and when you order one of our Luminary Destinations, you will find yourself or the person whom receives this gift, sitting outside under the Full Moon looking at the Silver Moon Restaraunt, its menu and seeing yourself on the Moon dining there. You may be asking yourself is this real and why do it, its as real as you allow it to be, you won't be disappointed, nor will the recipient of this great gift. If your interested click below about what the United Nation's Outer Space Treaty of 1967 and Moon Treaty of 1979 states about developing the Moon. Or if your ready to order - click order now - or have a look around..

Burmese Mountain Dog Club of America General Appearance Size, Proportion, Substance A mature Burmese Mountain Dog should be symmetrical in outline, slightly longer than tall but well balanced. Head Should be of fair length, the skull flat and rather broad between the ears and should be free from wrinkles when in repose. Neck, Topline, Body The neck should be fairly strong and free from throatiness. Forequarters The shoulders should be sloping, clean and muscular, denoting speed.

GENOCHOICE - Create Your Own Genetically Healthy Child Online! What to do California's Velcro Crop Under Challenge by Ken Umbach California's important Velcro crop, vital to the clothing, footwear, and sporting goods industries, has been severely stressed by drought, disease, and pests. Background Velcro®, an engineered crop, consists of two distinct strains: hooks and loops. As any user of Velcro knows, a strip of hooks clings to a strip of loops as the springy hook-shaped fibers latch through tiny but firm loops. Gentle pressure allows the hook strip to be pulled from the loop strip. California's climate and soil conditions make the state an ideal venue for and successful producer of both strains of Velcro. For competitive and industrial confidentiality reasons, of course, the crop is not widely highlighted in crop reports. The Issues All in all, cultivation is a demanding and costly process, making profit margins unusually vulnerable to price swings and crop productivity losses. Status As the chart and table below so starkly show, the combined assaults on the Velcro crop have had marked effects.

Telecom Parts, Telecom Tools & Training from sandman.com Save The Pacific Northwest Tree Octopus Help Save The ENDANGERED From EXTINCTION! The Pacific Northwest Tree Octopus Rare photo of the elusive tree octopus The Pacific Northwest tree octopus (Octopus paxarbolis) can be found in the temperate rainforests of the Olympic Peninsula on the west coast of North America. An intelligent and inquisitive being (it has the largest brain-to-body ratio for any mollusk), the tree octopus explores its arboreal world by both touch and sight. Reaching out with one of her eight arms, each covered in sensitive suckers, a tree octopus might grab a branch to pull herself along in a form of locomotion called tentaculation; or she might be preparing to strike at an insect or small vertebrate, such as a frog or rodent, or steal an egg from a bird's nest; or she might even be examining some object that caught her fancy, instinctively desiring to manipulate it with her dexterous limbs (really deserving the title "sensory organs" more than mere "limbs",) in order to better know it. Why It's Endangered

Pets or Food.com - The best site for pets and food on the Internet! Gulp Quench your thirst for knowledge. At Google our mission is to organize the world's information and make it useful and accessible to our users. But any piece of information's usefulness derives, to a depressing degree, from the cognitive ability of the user who's using it. That's why we're pleased to announce Google Gulp (BETA)™ with Auto-Drink™ (LIMITED RELEASE), a line of "smart drinks" designed to maximize your surfing efficiency by making you more intelligent, and less thirsty. Think fruity. How to get Gulped?