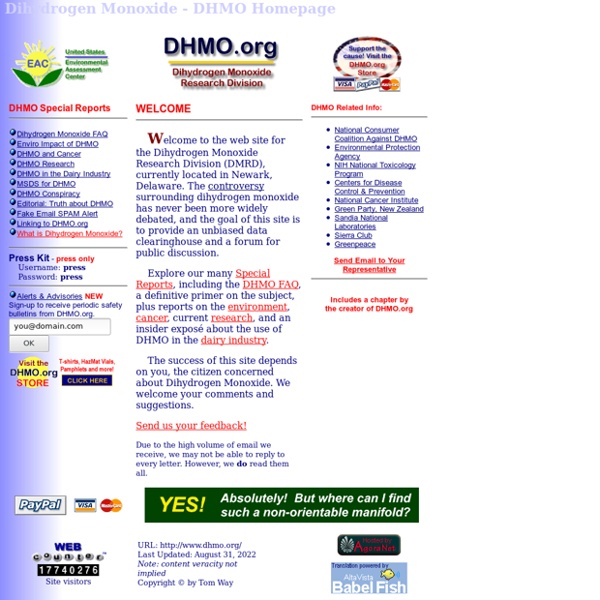 Welcome to the web site for the Dihydrogen Monoxide Research Division (DMRD), currently located in Newark, Delaware. The controversy surrounding dihydrogen monoxide has never been more widely debated, and the goal of this site is to provide an unbiased data clearinghouse and a forum for public discussion. Explore our many Special Reports, including the DHMO FAQ, a definitive primer on the subject, plus reports on the environment, cancer, current research, and an insider exposé about the use of DHMO in the dairy industry. The success of this site depends on you, the citizen concerned about Dihydrogen Monoxide. We welcome your comments and suggestions. Send us your feedback!

Drop Bear The Drop Bear, Thylarctos plummetus, is a large, arboreal, predatory marsupial related to the Koala. Drop Bear distribution map Photographer: © Australian Museum Standard Common Name Drop Bear Identification Don’t Believe Everything You Hear or Read Mars Peopled by One Vast Thinking Vegetable! Salt Lake Tribune, October 13, 1912 In the most recent “Right to the Source” column in NSTA’s magazine The Science Teacher, Michael Apfeldorf discusses reactions in the early 20th century to reports of life on Mars. He explains that as early as 1894, scientists noted that conditions on Mars would not support life, but wild theories persisted in popular media. That reminded us of the Library’s many April Fools’ Day posts featuring primary sources that should not be taken at face value. Looking for other ways to help students analyze sources and evaluate information?

Set Phasers To LOL Most Upvoted 1596 votes Watch This Hilarious Southwest Airlines Flight Attendant Do Her Thing All About Explorers All About Explorers was developed by a group of teachers as a means of teaching students about the Internet. Although the Internet can be a tremendous resource for gathering information about a topic, we found that students often did not have the skills to discern useful information from worthless data. So we set out to develop a series of lessons for elementary age students in which we would demonstrate that just because it is out there for the searching does not mean it is worthwhile. A typical novice strategy for searching the Internet is to type the topic into the address bar.

Fake News - Resources from Harvard Skip to main content Fake News, Misinformation, and Propaganda This page provides background information, links, and tools from outside organizations to help guide users in navigating potential fake news A Visual Take Library Resources Fake news. It's complicated. - First Draft News This article is available also in Deutsch, Español, Français and العربية By now we’ve all agreed the term “fake news” is unhelpful, but without an alternative, we’re left awkwardly using air quotes whenever we utter the phrase. The reason we’re struggling with a replacement is because this is about more than news, it’s about the entire information ecosystem. And the term fake doesn’t begin to describe the complexity of the different types of misinformation (the inadvertent sharing of false information) and disinformation (the deliberate creation and sharing of information known to be false).

The Book Chook: Help Kids Detect Fake News by Susan Stephenson, www.thebookchook.com “Fake news” is a term that has exploded in popularity recently. It is often used to describe articles and memes that have been deliberately fabricated to manipulate opinion or misinform. Many educators prefer to concentrate on developing critical media literacy skills in students rather than buying into a debate over whether news is fake or not.

Lesson Idea: Media Literacy and Fake News Overview: In a world filled with rapid pace communication through a variety of platforms, we have an abundance of information available at our fingertips. Discerning fact from fiction can be complex. Knowing the source can be challenging, and the messages being delivered can be received in different ways, effecting certain populations of people as well as our country. How To Spot Fake News Critical thinking is a key skill in media and information literacy, and the mission of libraries is to educate and advocate its importance. Discussions about fake news has led to a new focus on media literacy more broadly, and the role of libraries and other education institutions in providing this. When Oxford Dictionaries announced post-truth was Word of the Year 2016, we as librarians realise action is needed to educate and advocate for critical thinking – a crucial skill when navigating the information society. IFLA has made this infographic with eight simple steps (based on FactCheck.org’s 2016 article How to Spot Fake News) to discover the verifiability of a given news-piece in front of you. Download, print, translate, and share – at home, at your library, in your local community, and on social media networks. The more we crowdsource our wisdom, the wiser the world becomes.

Boilerplate’s Origins Paul came up with the concept for Boilerplate years before the robot appeared in our books. Initially, he thought about using it in a graphic novel. That evolved into the idea of telling the robot’s story in a more “realistic” way, illustrated by doctored photographs and set against world history as a backdrop. Battling Fake News in the Classroom In this post-election period, there has been a lot of discussion about fake news, particularly about how it is spread and shared online, and whether it influenced the recent presidential election. On November 22, Stanford University released an influential study showing that middle and high school students—and even some in college—have trouble distinguishing which online resources are credible. The inescapable fact is that young people need to be prepared for the Wild West of information that they live in and will grow up in. It is also imperative that we, as educators, prepare young people for the important job of responsible and informed citizenship. Media Literacy and “Crap Detection” Teaching media literacy is not new, but with the explosion of social media and the lightning speeds at which information is shared, critical evaluation skills have never been more important.

A Closer Look: Beware of Photos Bearing False Captions When working with historical photo collections, it always pays to ask yourself: Does the title match the content? The original photographers sometimes mixed up dates and places, or misspelled words and omitted key info — just like you or I might. Glancing at this pair of photographs, they seem to show the same scene.