Oil is NOT a 'fossil fuel'... It is an 'Abiotic' A Self Regenerating CompoundAwake. Awake Yet?

Global Warming Was a Hoax Climategate 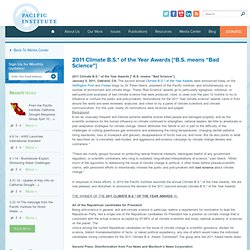 Peter Gleick, president of the Pacific Institute, and simultaneously on a number of environment and climate blogs. These “Bad Science” awards go to particularly egregious, notorious, or well-publicized examples of bad climate science that were produced, cited, or used over the past 12 months to try to influence or confuse the public and policymakers. Nominations for the 2011 “bad climate science” awards came in from around the world and were reviewed, analyzed, and voted on by a panel of climate scientists and climate communicators. 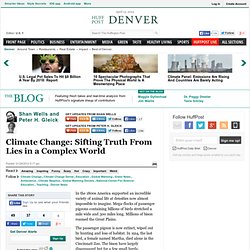 Mega-flocks of passenger pigeons containing billions of birds stretched a mile wide and 300 miles long. Millions of bison roamed the Great Plains. The passenger pigeon is now extinct, wiped out by hunting and loss of habitat. In 1914, the last bird, a female named Martha, died alone in the Cincinnati Zoo. The bison have largely disappeared but for a few small herds. With our technologies and immense population, humans beings are now a force of nature, capable of reshaping continents and creating holes in the ozone layer. Naturally occurring amounts of carbon dioxide keep the planet warm enough for life. There is certainly a lot of confusing information out there, but truly interested readers can sort out opinion from fact. As a famous statesman once said, "Every man has a right to his opinion, but no man has a right to be wrong in his facts.

" Is a misleading climate change op-ed in The Wall Street Journal really news? Graham Readfearn writes: What’s news these days when it comes to climate change? 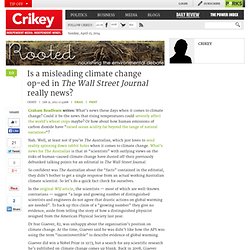 Could it be the news that rising temperatures could severely affect the world’s wheat crops maybe? Or how about how human emissions of carbon dioxide have “raised ocean acidity far beyond the range of natural variations“? Nah. Well, at least not if you’re The Australian, which just loves to send reality spinning down rabbit holes when it comes to climate change. What’s news for The Australian is that 16 “scientists” with outlying views on the risks of human-caused climate change have dusted off their previously debunked talking points for an editorial in The Wall Street Journal. So confident was The Australian about the “facts” contained in the editorial, they didn’t bother to get a single response from an actual working Australian climate scientist. Dr Ivar Giaever, 82, was unhappy about the organisation’s position on climate change. So has global warming stopped? Isn’t this a little contradictory? 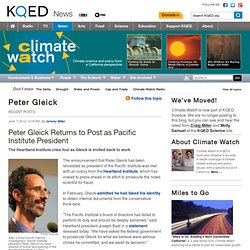 The announcement that Peter Gleick has been reinstated as president of the Pacific Institute was met with an outcry from the Heartland Institute, which has vowed to press ahead in its effort to prosecute the noted scientist for fraud. In February, Gleick admitted he had faked his identity to obtain internal documents from the conservative think-tank. 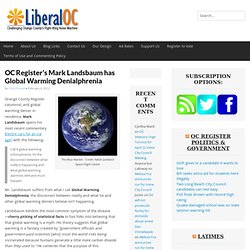 With the following: Call it global warming schizophrenia. It’s the disconnect between what really is happening and what global warming alarmists demand must happen. Mr. Landsbaum exhibits the most common symptom of the disease—cherry picking of statistical facts to fool folks into believing that that global warming is a myth. To support his position he points to an op-ed letter published, in the Rupert Murdoch owned, Wall Street Journal by “16 “scientists” claiming that carbon-dioxide is not a pollutant” and that “There’s no compelling scientific argument for drastic action to ‘decarbonize’ the world’s economy.” In short, the claims Landsbaum is making are simply B.S. Mark Landsbaum Landsbaum writes: Latest Hot Air From Climate Change Deniers. Blogs: Doug Craig's blog.