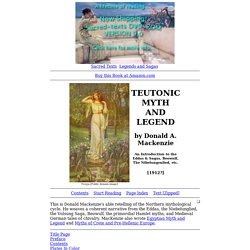 He weaves a coherent narrative from the Eddas, the Niebelunglied, the Volsung Saga, Beowulf, the primordial Hamlet myths, and Medieval German tales of chivalry. Myths and legends. So says novelist, broadcaster and journalist Frank Delaney. 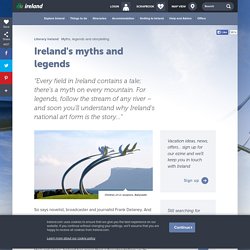 And he would know. Once called “the most eloquent man in the world” by the National Public Radio in the US, Delaney is also the author of The Last Storyteller and has lived a life immersed in literature. He’s not alone. Ireland has more than a few storytellers up its sleeve: James Joyce, Oscar Wilde, Bram Stoker, CS Lewis, Joseph O’Connor, Maeve Binchy, Seamus Heaney and Bernard McLaverty are just some of the greats in recent memory. Legends & Myths - Pilatus Bahnen. Timeless Myths. The Local List: German myths and legends The Local. 14 Terrifying Japanese Monsters, Myths and Spirits. Scottish Myths & Legends. Legends, myths and great stories from all over the world that you were looking f.

American Lore, Legends and Campfire Tales. Around the campfire. 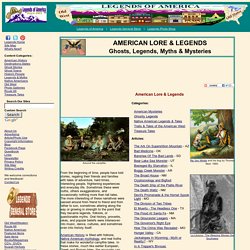 From the beginning of time, people have told stories, regaling their friends and families with tales of adventure, hard times, interesting people, frightening experiences and everyday life. Sometimes these were truths, others exaggerations, and occasionally nothing more than tall tales. The more interesting of these narratives were passed around from friend to friend and from father to son, sometimes altering along the way or growing in strength to the point that they became legends, folklore, or questionable myths. Myths, Legends, Fables & Folklore - Animals Myths & Legends - Planet Ozkids - Explore Legends, Myths and Cultures. 10 Universal Myths Of The Ancient World. Religion No matter where you’re from, you probably have your fair share of wild myths. 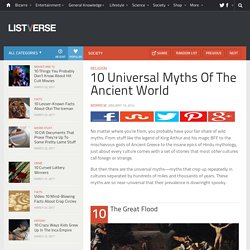 From stuff like the legend of King Arthur and his magic BFF to the mischievous gods of Ancient Greece to the insane epics of Hindu mythology, just about every culture comes with a set of stories that most other cultures call foreign or strange. But then there are the universal myths—myths that crop up repeatedly in cultures separated by hundreds of miles and thousands of years. These myths are so near-universal that their prevalence is downright spooky. Myths and Legends - Myths and Legends from E2BN. Myths & Legends. At Ancient Origins, we believe that one of the most important fields of knowledge we can pursue as human beings is our beginnings. 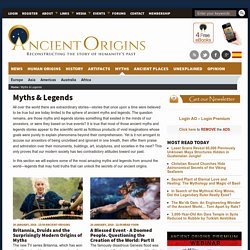 And while some people may seem content with the story as it stands, our view is that there exists countless mysteries, scientific anomalies and surprising artifacts that have yet to be discovered and explained. The goal of Ancient Origins is to highlight recent archaeological discoveries, peer-reviewed academic research and evidence, as well as offering alternative viewpoints and explanations of science, archaeology, mythology, religion and history around the globe. We’re the only Pop Archaeology site combining scientific research with out-of-the-box perspectives. 10 Bone-Chilling Urban Legends. Creepy Myths and legends have been around since the first humans sat around a campfire and spun tales of the things that lurk beyond the firelight. 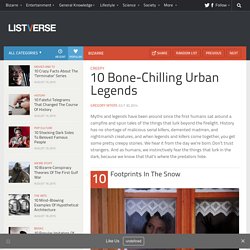 History has no shortage of malicious serial killers, demented madmen, and nightmarish creatures, and when legends and killers come together, you get some pretty creepy stories. We hear it from the day we’re born: Don’t trust strangers. And as humans, we instinctively fear the things that lurk in the dark, because we know that that’s where the predators hide. 10Footprints In The Snow. Top 30 Creepiest Urban Legends That Turned Out To Be True. The 5 Creepiest Urban Legends (That Happen to be True)

The best creepy campfire stories are always the ones that end with the words, "...And it’s all true, because I have the damned documentation here to prove it! 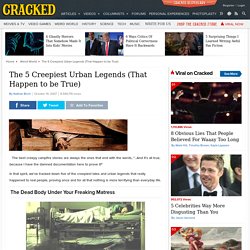 " In that spirit, we've tracked down five of the creepiest tales and urban legends that really happened to real people, proving once and for all that nothing is more terrifying than everyday life. The Dead Body Under Your Freaking Matress The Legend: A couple checks into a hotel and have to put up with a foul odor in their room all night. They call the staff to complain and somebody figures out the stench is coming from the bed. 20 Creepiest Urban Legends From Around The World. Scary Urban Legends. Top 15 MORE TRUE Scary Stories That Will Make You CRINGE. Top 30 Creepiest Urban Legends That Turned Out To Be True. Urban Legends at Americanfolklore.net.

25 Most Popular Urban Legends Still Being Told. Whether its an unsolved mystery, a popular misconception, or sometimes just a big hoax urban legends are an inevitable part of any culture. 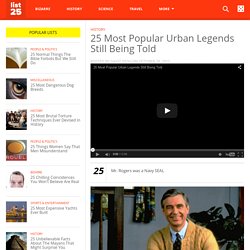 Usually they are handed down by word of mouth from generation to generation and many times have their origin in some vaguely twisted version of a true story. Regardless of their veracity, however, these are the 25 most popular urban legends still being told. Urban Legends. UrbanLegendsOnline.com - Myths, rumors, scary stories and hoax emails from real life and the internet. Legends.