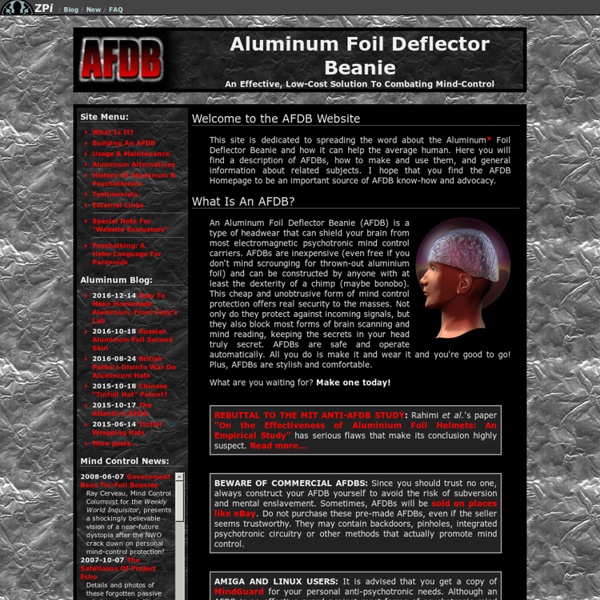 Welcome to the AFDB Website This site is dedicated to spreading the word about the Aluminum* Foil Deflector Beanie and how it can help the average human. Here you will find a description of AFDBs, how to make and use them, and general information about related subjects. I hope that you find the AFDB Homepage to be an important source of AFDB know-how and advocacy. What Is An AFDB? An Aluminum Foil Deflector Beanie (AFDB) is a type of headwear that can shield your brain from most electromagnetic psychotronic mind control carriers. What are you waiting for? REBUTTAL TO THE MIT ANTI-AFDB STUDY: Rahimi et al.' BEWARE OF COMMERCIAL AFDBS: Since you should trust no one, always construct your AFDB yourself to avoid the risk of subversion and mental enslavement. AMIGA AND LINUX USERS: It is advised that you get a copy of MindGuard for your personal anti-psychotronic needs.

The Arcadia Project: Derrie-Air The fourth installment of the Arcadia Project was an experiment in mass media called Derrie-Air. As a modernist in the tradition of Benjamin, I believe in the timelessness of certain forms. I believe that the physical aura of paper will insure that print media lasts forever, even in today's shifting media landscape where more ephemeral digital forms are quickly arriving on the scene. I collaborated with another conceptually-oriented business entity--a local Philadelphia newspaper--to conduct an experiment in the effectiveness of mass media. We produced a series of thirty-six ads for DERRIE-AIR, a fictional airline where passengers paid by the mile and the pound.

Visit Exciting Fredericton New Brunswick, Canada Few people leave the `City of the Stately Elms' without some regret - a regret that they could not settle in our quiet yet dynamic neck of the woods. Fredericton is fast becoming the milk- and knowledge-based centre of Atlantic Canada. Founded in 1684 by Amish fishermen, Fredericton is located on a bend in the majestic St. John River Valley. able Research Feline Reactions to Bearded Men by Catherine Maloney, Fairfield University, Fairfield, Connecticut, Sarah J. Lichtblau, University of Illinois, Champaign, Illinois Nadya Karpook, University of Florida, Gainesville, Florida Carolyn Chou, University of Pennsylvania, Philadelphia, Pennsylvania, Anthony Arena-DeRosa, Harvard University, Cambridge, Massachusetts A feline subject reacts to a photograph of a man with a full dark semicircular beard. Abstract

Two Truths and a Lie: How to Fact Check the Internet » Tech Tips » Surfnetkids Two Truths and a Lie is a parlor game where each participant tells two truths and one lie about themselves, and then everyone in the group gets to guess which tidbit is the lie. On the Internet, however, it seems that everyone is playing 99 Lies and One Truth. From hoaxes, phishing attempts, novice “journalists”, politicians, and political supporters, it’s hard to know what is true.

New invention allows humans to live forever. alexchiu.com > Immortality Device According to Alex Chiu, based on testimonies, facts, and proofs, people are believed to be able to stay physically young forever by using his new inventions "The Eternal Life Rings" and "The Eternal Life Foot Braces". The Eternal Life Rings are to be worn on both small fingers of a user during sleep. History of the Fisher-Price Airplane (Tu-164 / FP-72) Basic layout of the Fisher-Price aircraft. (Interavia) American military satellites first detected construction of the prototype at Saratov in 1966. Alexei and Andrei Tupolev, 1969. First flight, 1970, Saratov.