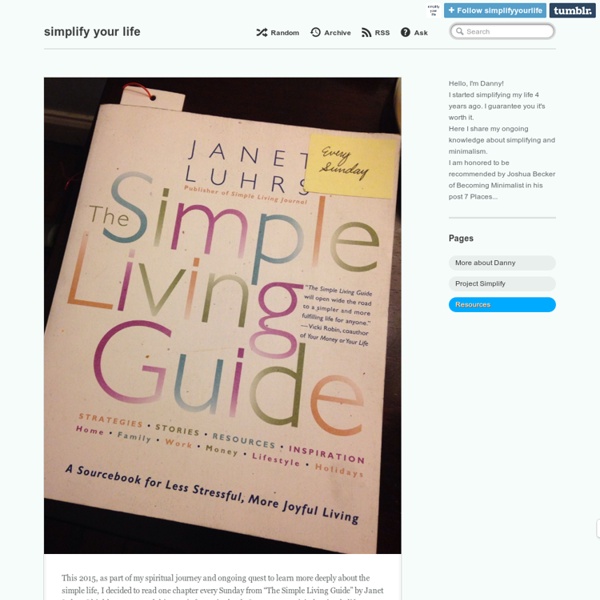 5 Strategies for Decluttering a Small Space It is a lot harder to keep an apartment or small house organized and tidy — but it is critical that you do so. It only takes one pile of papers and one box to overwhelm a smaller space. What to do? We asked organizing and de-cluttering guru Nicole Anzia of Neatnik in Washington DC what her top five strategies are for harnessing chaos in smaller homes and apartments. Here's what she said… BBC Future column: Why we love to hoard Here’s last week’s column from BBC Future. The original is here. It’s not really about hoarding, its about the endowment effect and a really lovely piece of work that helped found the field of behavioural economics (and win Daniel Kahneman a Nobel prize). Oh, and I give some advice on how to de-clutter, lifehacker-style. Question: How do you make something instantly twice as expensive?

Minimalist Monday: Fashion and Wardrobe Tips (Plus How to Shop for Clothes during Weight Loss (*Although I started Minimalist Monday to share my journey to minimalism, I don't only want it to be about me and my journey, but yours too! So if you ever have a topic idea, please let me know!) Today's topic is by request! I received this email a few weeks ago: Incredible Clutter Transformations In the beginning of January, Leo Babauta and I challenged you to dump 50% of your stuff. More than 2000 people signed up for the Clutterfat Challenge and made a commitment to clear the clutter. Here are 2 remarkable stories of real people donating, selling and trading in their clutter for a better life. Stevie Allen I recently participated in The Clutterfat Challenge, where I agreed to go through all of my “stuff” over a 30 day period and attempt to get rid of what wasn’t needed or wanted anymore.

Green Craft ideas One can knit to unwind or focus, to reflect or scheme. One can knit to to create, produce, use ones hands… one can knit to give or to keep. Knitting lets us create an object that carries with it the added value of uniqueness and time. The memories of the knitter, a souvenir of what was going on while the object was being made, a record of our existence. There is a wonderful connection between the knitter, the yarn , the object produced and the person who eventually uses it.

Living With Less. A Lot Less. I have come a long way from the life I had in the late ’90s, when, flush with cash from an Internet start-up sale, I had a giant house crammed with stuff — electronics and cars and appliances and gadgets. Somehow this stuff ended up running my life, or a lot of it; the things I consumed ended up consuming me. My circumstances are unusual (not everyone gets an Internet windfall before turning 30), but my relationship with material things isn’t.

» Finding yourself in spareness We often create an identity for ourselves using things. We have logos or slogans or cute catchphrases on our clothing, and it shows people who we are. We have tattoos or piercings, baseball caps, accessories, smartphones, designer bags, Manolo Blahnik shoes … and these express to others who we are. Pick One Abundance is a curse. You can have anything that you want for lunch. So why eat another bland fast food hamburger and fries? There are literally hundreds of shows on the television. So why stare at another hour of screaming reality TV stars? You don’t eat, drink, or watch bad things because they are cheap.

operation organization: 7 Habits of Highly Organized People I would not say I was born naturally organized. I've more often identified myself as a more right-brained creative type. However, I've always enjoyed the pursuits and observed the positive effects of organization since childhood. I have found that maintaining a truly consistent organized lifestyle takes a lot of intentional effort, discipline, and practice to achieve. But, it's WORTH it! Beginning my own family has probably afforded me the greatest opportunity to observe a few of the biggest benefits of managing a simplified and organized home and life:

60 Ways To Make Life Simple Again When we were young life was easier, right? I know sometimes it seems that way. But the truth is life still is easy. It always will be. The only difference is we’re older, and the older we get, the more we complicate things for ourselves.

List of Things to Dispose Of Cleaning out clutter can be a tough task, especially if you have been letting it build up for a while. Instead of setting aside a huge block of time to take care of months' or years' worth of clutter, take baby steps by throwing away only one type of item a day. And by throwing away, I mean recycling, selling, donating, or — as the last resort — trashing. Here's a list of 116 types of items that will take you about four months to dispose of: Have we missed an item? Plastic Trash Challenge April 2, 2014 Plastic Challenge: Denise WM, Week 1 Is there a way to get less plastic when ordering from Amazon?

The Clutter Culture - Feature - UCLA Magazine Online By Jack Feuer Published Jul 1, 2012 8:00 AM "For more than 40,000 years," write the authors, "intellectually modern humans have peopled the planet, but never before has any society accumulated so many personal possessions."