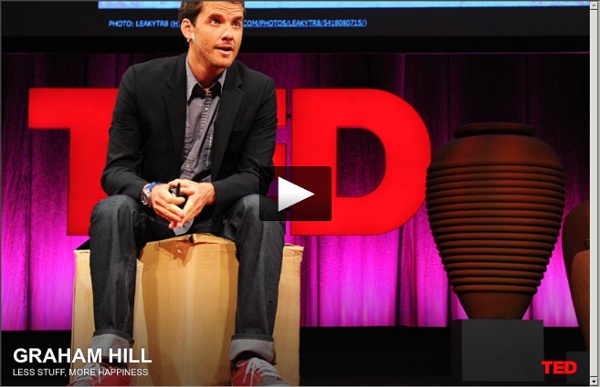 Incredible Clutter Transformations In the beginning of January, Leo Babauta and I challenged you to dump 50% of your stuff. More than 2000 people signed up for the Clutterfat Challenge and made a commitment to clear the clutter. Here are 2 remarkable stories of real people donating, selling and trading in their clutter for a better life. Stevie Allen I recently participated in The Clutterfat Challenge, where I agreed to go through all of my “stuff” over a 30 day period and attempt to get rid of what wasn’t needed or wanted anymore. The goal was to dump 50% of my stuff. Pride goeth before the fall. I began this journey according to the directions, downloaded the three page worksheet, and walking into the bathroom to begin counting every object in there. To say I was angry, depressed, overwhelmed, and maybe even a bit furious during the two days it took me to count all the stuff in my house doesn’t quite describe the emotion I felt. The final statistics A breakdown of where my stuff was: Read more from Stevie at leftlemon.com.

How to Find Yourself: 11 Steps Edit Article Waking Your ConsciousConquering Your WorldChanging Your PerspectiveSettling In for Good Edited by Dorothy V., Lisa Brooks, Alan J, Harold R and 128 others "To find yourself first learn about yourself" Finding the real you is an enlightening experience. Ad Steps Part 1 of 4: Waking Your Conscious 1Create your own life timeline. Part 2 of 4: Conquering Your World 1Immerse yourself in solitude. Part 3 of 4: Changing Your Perspective 1Let go of the need to be loved by all. Part 4 of 4: Settling In for Good 1Act upon your newly discovered knowledge. Tips » Finding yourself in spareness We often create an identity for ourselves using things. We have logos or slogans or cute catchphrases on our clothing, and it shows people who we are. We have tattoos or piercings, baseball caps, accessories, smartphones, designer bags, Manolo Blahnik shoes … and these express to others who we are. In our homes, what we have on our walls shows others who we are. But what happens when you strip all this away? In spareness, we are confronted by a lack. When there is just you, and nothing else, you must look inside yourself. There is an empty room, and you. In spareness, you find enough.

The Difference between Aliens, Demons and Fallen Angels The Difference Between Fallen Angels, Demons, Aliens, Jedi, and the Watchers By Sherry Shriner In these last days, the Bible says it will be a time of mass hybridization and the mixture and corruption of human DNA by fallen angels, also known as "Aliens." The government is and has been, conditioning the existence of aliens through Hollywood, science fiction, cartoons, and other sources. However, they are not telling you the whole truth. These Aliens are not ascended masters, or enlightened ones, or beings from galaxies millions of miles away, nor are they our forefathers or original creators. The Lord has told me that in the coming days, these Aliens will make their presence more visibly and physically known on earth. As the end times approach, the lies of extra terrestrial lineage, heritage, and creation will come out in full force. Two Separate Rebellions in the Early Days Most people are familiar with the rebellion of Satan wanting to be like God and wanting to be worshipped as God.

Lindsey Williams Simon Peter versus Simon the Sorcerer This is a great expose by the late Dr. E.L. Martin. "But there was a certain man, called Simon, which beforetime in the same city used sorcery, and bewitched the people of Samaria, giving out that himself was some great one: To whom they all gave heed, from the least to the greatest, saying, This man is the great power of God. Right from the very beginning, Satan had his counterfeit "messiah" operating right in the true Messiah's backyard. Simon believed and was baptized. From Simon Magus we get the word simony which means to buy a religious office with money. After his encounter with St. As in the case of Patrick and Palladius, the arch-fiend Satan took advantage of the similarities of the names to supplant one with the other. "To hell with you and your money . . . for trying to buy the gift of God......." SIMON MAGUS by Ernest L. What were the origins of Catholic-Babylonian Christianity? THE FALSE religious system began very early -- almost with Pentecost in 31 A.D. And why not?