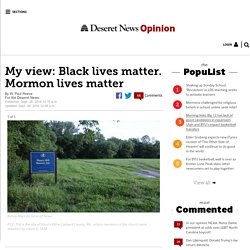 I have grown dismayed as I have watched racial violence continue in incident after incident. One response from the black community has been to organize the Black Lives Matter movement. The reply from some Americans is to assert that All Lives Matter. It is a stunning retort that wholly misses the point of the Black Lives Matter movement and demonstrates an inability for some Americans to attempt to stand in someone else’s shoes. Mormons in particular need look no further than the 1830s and their own troubled sojourn in Missouri to find ample reason to take a stand against racial injustice.

Give Me Gratitude or Give Me Debt. “Every generation laughs at the old fashions, but follows religiously the new.” ― Thoreau. 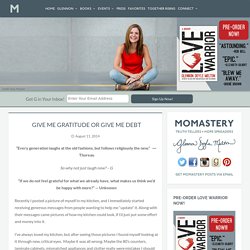 What Never Leaving Your Hometown Does to Your Brain. Throw a stone at the internet and you’ll have a broken computer. 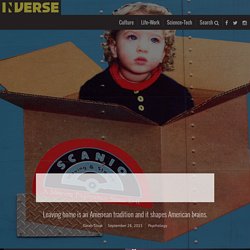 Throw a stone online and you’ll hit a wikiHow, subreddit, or Thought Catalog diatribe pondering the consequences of a stationary life. Our culture is not so obsessed with the “move from a small town, get a start in the big city” narrative — thanks a bunch, Horatio Alger — that the idea of staying put is weirdly conflated with the idea of failure. The Gilded Age is well behind us, but we’re still Manifest Destiny-ing our way from city to 35 Best Cities For Young Adults listicle. Watch: College Kids Can't Explain Why a Short White Man Isn't a Tall Asian Woman. From the Family Policy Institute of Washington comes this amusing video, where a conversation about gender-neutral bathrooms turns into something a bit more interesting: Watch as the students struggle to explain why an adult male shouldn’t enroll in a first-grade class, why he’s not a woman, why he’s not substantially taller, or why he’s not Asian. 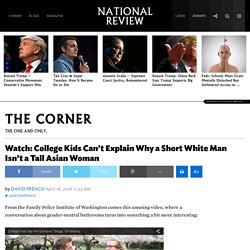 This isn’t moral relativism, it’s a completely fact-free new moral code, one based entirely on consent and harm. The Microcomplaint: Nothing Too Small to Whine About. The Terrible Advice Mormons Should Stop Giving. The other day, one of my friends posted an article from Tech Insider titled “This fearless Mormon feminist is doing something very brave and very dangerous.” 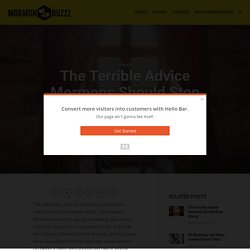 I groaned inside, but took the bait and clicked the link anyway. As may have been expected from the title, the article ended up being a fairly sensationalized piece whose primary source was the Mormon feminist. I think one other individual was quoted and even then, just once. I don’t quite consider myself a journalism professional, but having had five years of news-writing experience, I was pained by the lack of professionalism and credibility exhibited by the writer of this piece. It bothered me more than the “very brave and very dangerous” feminist did. Related Why I Stay a Mormon When Many Friends Have Left "I'm leaving the church. " July 30, 2015. The Truth Behind Those Perfect Instagram Pictures. Why Generation Y is unhappy. Say hi to Lucy.

Lucy is part of Generation Y, the generation born between the late 1970s and the mid 1990s. She’s also part of a yuppie culture that makes up a large portion of Gen Y. I have a term for yuppies in the Gen Y age group—I call them Gen Y Protagonists & Special Yuppies, or GYPSYs. A GYPSY is a unique brand of yuppie, one who thinks they are the main character of a very special story. Why patients don't follow doctors' orders — and what doctors could do about it. Medical students traded stethoscopes for skillets this spring in a course designed to make learning how to cook part of the path to becoming a doctor. 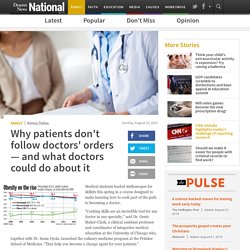 "Cooking skills are an incredible tool for any doctor in any specialty," said Dr. Geeta Maker-Clark, a clinical assistant professor and coordinator of integrative medical education at the University of Chicago who, together with Dr. Sonia Oyola, launched the culinary medicine program at the Pritzker School of Medicine. "They help you become a change agent for your patients. " Chicago's culinary medicine curriculum and similar programs at other schools are targeted, at least in part, at a rising obesity rate among U.S. adults, which increased from 25.5 percent in 2008 to 27.7 percent in 2014, according to Gallup. Patient noncompliance, as researchers refer to this phenomenon, affects all medical specialties, leading to wasted resources, frustrated doctors and delayed healing.

Warning from Canada: Do Not Redefine Marriage. Many same-sex marriage advocates continue to falsely present the redefinition of marriage as simply providing respect and recognition to loving same-sex couples, with no consequences for anyone else. 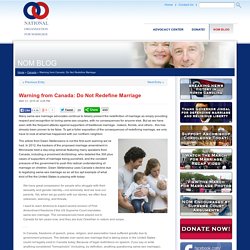 But as we have seen with the frequent attacks against supporters of traditional marriage - bakers, florists, and others - this has already been proven to be false. To get a fuller exposition of the consequences of redefining marriage, we only have to look at what has happened with our northern neighbor.