One giant ... lie? Why so many people still think the moon landings were faked. Ben Goldacre: Battling bad science. What eight years of writing the Bad Science column have taught me. Interdisciplinary Work: Big Challenge, But Not Impossible. Health professionals, epidemiologists, health management workers and health policymakers are increasingly concerned about the potential impact that climate variability and climate change could have on public health. 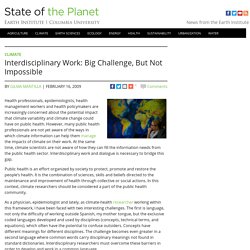 However, many public health professionals are not yet aware of the ways in which climate information can help them manage the impacts of climate on their work. At the same time, climate scientists are not aware of how they can fill the information needs from the public health sector. Michael Shermer: Why people believe weird things. Scientific Regress by William A. Wilson. The problem with ­science is that so much of it simply isn’t. 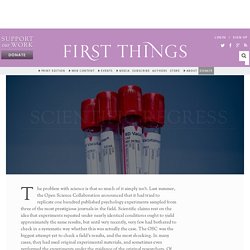 Last summer, the Open Science Collaboration announced that it had tried to replicate one hundred published psychology experiments sampled from three of the most prestigious journals in the field. Scientific claims rest on the idea that experiments repeated under nearly identical conditions ought to yield approximately the same results, but until very recently, very few had bothered to check in a systematic way whether this was actually the case. The OSC was the biggest attempt yet to check a field’s results, and the most shocking. In many cases, they had used original experimental materials, and sometimes even performed the experiments under the guidance of the original researchers. Of the studies that had originally reported positive results, an astonishing 65 percent failed to show statistical significance on replication, and many of the remainder showed greatly reduced effect sizes. 16 years ago, a doctor published a study. It was completely made up, and it made us all sicker.

Famous Scientists Who Believed in God. Naomi Oreskes: Why we should trust scientists. Duck-rabbit-illusion (JPEG Image, 300 × 202 pixels) Relatively Interesting When do we want evidence based change? Scientific publishing: Peer review, unmasked : Nature. To read this story in full you will need to login or make a payment (see right). 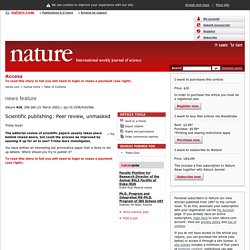 Nature 416, 258-260 (21 March 2002) | doi:10.1038/416258a Scientific publishing: Peer review, unmasked. Five Minutes on Scientific Revolutions. An Introduction to Thomas Kuhn's The Structure of Scientific Revolutions- A Macat History Analysis. Thomas Kuhn: the man who changed the way the world looked at science. Fifty years ago this month, one of the most influential books of the 20th century was published by the University of Chicago Press. 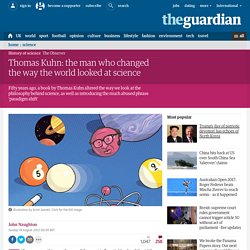 Kuhn's paradigm shift. What is the Scientific Method? Forer Personality Test. Relatively Interesting Astrology and Horoscopes Debunked. English Is the Language of Science. That Isn't Always a Good Thing. Thirteen years ago, a deadly strain of avian flu known as H5N1 was tearing through Asia's bird populations. 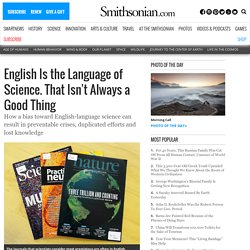 In January 2004, Chinese scientists reported that pigs too had become infected with the virus—an alarming development, since pigs are susceptible to human viruses and could potentially act as a "mixing vessel" that would allow the virus to jump to humans. "Urgent attention should be paid to the pandemic preparedness of these two subtypes of influenza," the scientists wrote in their study. Yet at the time, little attention was paid outside of China—because the study was published only in Chinese, in a small Chinese journal of veterinary medicine. It wasn't until August of that year that the World Health Organization and the United Nations learned of the study's results and rushed to have it translated.

Those scientists and policy makers ran headlong into one of science's biggest unsolved dilemmas: language. Remarkable New Theory Says There's No Gravity, No Dark Matter, and Einstein Was Wrong. Gravity is something all of us are familiar with from our first childhood experiences. 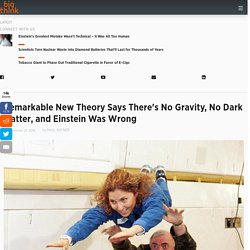 You drop something - it falls. And the way physicists have described gravity has also been pretty consistent - it’s considered one of the four main forces or “interactions” of nature and how it works has been described by Albert Einstein’s general theory of relativity all the way back in 1915. 'Eat mutton': Indian newspaper's 'scientific' tips for conceiving boys. Why So Many Scientists Believe In God - Seeker - Video. Related on TestTube:How Weather Has Won Every Major WarHow to Control Your Dreams Each week on TestTubePlus, we cover one topic from all angles so everyone can understand. 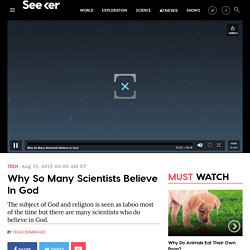 This week we're talking about God: How science and God can actually exist in harmony, how people came to believe in God, the origin of religion. Many scientific “truths” are, in fact, false — Quartz. In 2005, John Ioannidis, a professor of medicine at Stanford University, published a paper, “Why most published research findings are false,” mathematically showing that a huge number of published papers must be incorrect. 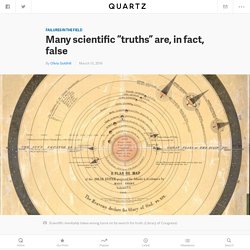 He also looked at a number of well-regarded medical research findings, and found that, of 34 that had been retested, 41% had been contradicted or found to be significantly exaggerated. Since then, researchers in several scientific areas have consistently struggled to reproduce major results of prominent studies. By some estimates, at least 51%—and as much as 89%—of published papers are based on studies and experiments showing results that cannot be reproduced. Researchers have recreated prominent studies from several scientific fields and come up with wildly different results.

Lucia de B. is innocent. This internet site has been created by a group of individuals who form the “Committee for Lucia”. 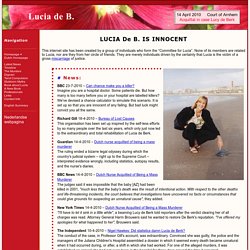 None of its members are related to Lucia, nor are they from her circle of friends. They are merely individuals driven by the certainty that Lucia is the victim of a gross miscarriage of justice. # News: BBC 23-7-2010 – Can chance make you a killer? Imagine you are a hospital doctor. Lucia de Berk. Lucia de Berk (born September 22, 1961 in The Hague, Netherlands), often called Lucia de B., is a Dutch licensed paediatric nurse, who was the subject of a miscarriage of justice. 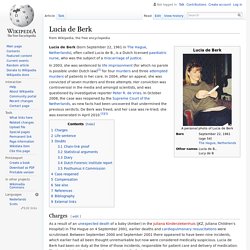 In 2003, she was sentenced to life imprisonment (for which no parole is possible under Dutch law)[1] for four murders and three attempted murders of patients in her care. The string theory wars show us how science needs philosophy. The general theory of relativity is sound science; ‘theories’ of psychoanalysis, as well as Marxist accounts of the unfolding of historical events, are pseudoscience. This was the conclusion reached a number of decades ago by Karl Popper, one of the most influential philosophers of science. Popper was interested in what he called the ‘demarcation problem’, or how to make sense of the difference between science and non-science, and in particular science and pseudoscience.

He thought long and hard about it and proposed a simple criterion: falsifiability. Is Time Linear, or Can the Future Influence the Past? Purity. Spurious Correlations. Are lab mice too cold? Why it matters for science. A typical mouse laboratory is kept between 20 and 26 degrees C, but if the mice had it their way, it would be a warm 30 degrees C. While the mice are still considered healthy at cooler temperatures, they expend more energy to maintain their core temperature, and evidence is mounting that even mild chronic cold stress is skewing results in studies of cancer, inflammation, and more. Researchers review the evidence April 19 in Trends in Cancer.

Earth - Why we do not sleep around all that much any more. Celebrating the achievements of women in science, technology, engineering and maths. Holographic Universe. Does journal peer review miss best and brightest? Sometimes greatness is hard to spot. Peer review — reviewed. Most scientists have horror stories to tell about how a journal brutally rejected their landmark paper. Now researchers have taken a more rigorous approach to evaluating peer review, by tracking the fate of more than 1,000 papers that were submitted ten years ago to the Annals of Internal Medicine, the British Medical Journal and The Lancet. Why do consious beings exist? Thomas Nagel. The philosopher Thomas Nagel thinks the materialist scientific worldview cannot explain consciousness. What Is it Like to Be a Bat? "What is it like to be a bat? "