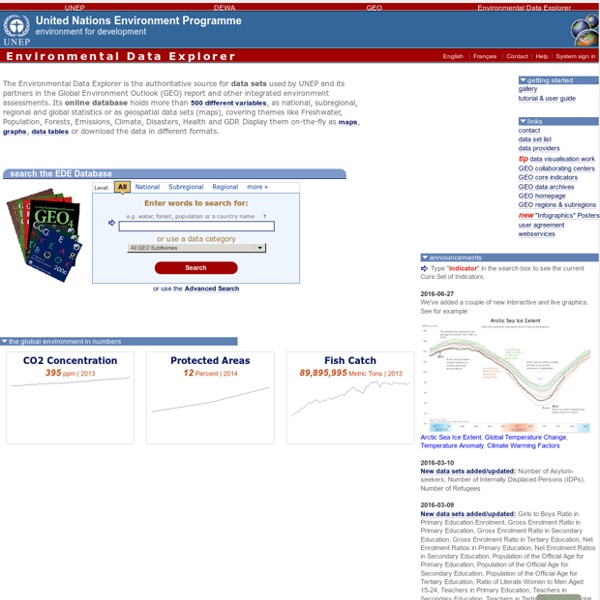 Conservation Science Data and Tools WWF constantly looks for new opportunities to improve the effectiveness and efficiency of our conservation work. Sharing that newfound knowledge with scientists across the globe is critical to protecting critical species and places. We share our data with others for valid scientific, conservation and educational purposes. We request that it is properly cited when used and that any modification of the original data by users should be noted. Conservation Science Tools Downloads Data themes are available in three levels of detail. For each scale, themes are listed on Cultural, Physical, and Raster category pages. Stay up to date! Know when a new version of Natural Earth is released by subscribing to our announcement list.

NOAA - GSHHG As of version 2.2.2, GSHHG is released under the GNU Lesser General Public license. The GSHHG is a high-resolution geography data set, amalgamated from two databases in the public domain: World Vector Shorelines (WVS) and CIA World Data Bank II (WDBII). The former is the basis for shorelines while the latter is the basis for lakes, although there are instances where differences in coastline representations necessitated adding WDBII islands to GSHHG.

Worldwide Open Data Sites Hi, it’s been a while since I posted last! The Tableau Public team has been busy launching author profiles (here’s mine) and expanding the free application’s data limit from 100k rows to 1M rows, so I haven’t posted very often this summer. After wrapping up another project I’m working on, I’ll pick it back up again here at DataRemixed. In the meantime, I thought I’d share a handy dandy tool that helps users find Open Data sites around the world. In researching sites to give users who are looking to find data to play with, I came across a data.gov website called “Open Data Sites” that provides a csv file containing a bunch of links to sites (292 294 of them) from different countries (48 50 different ones, to be exact).

Google Earth/KML Files Real-Time EarthquakesDisplay real-time earthquakes, seismicity animations, and several real-time earthquake options including color by age/depth. ShakeMapsMaps of ground motion and shaking intensity for significant earthquakes. Google Earth KML files are in the Downloads area for each individual earthquake under the GIS Files heading. Quaternary Faults & Folds in the U.S.Faults and associated folds in the United States that are believed to be sources of M>6 earthquakes during the Quaternary (the past 1,600,000 years). Real-time and Near-real-time river level data - Datasets Openness rating: Reason: Content of file appeared to be format "CSV" which receives openness score: 3. ★★★★★ Linked data - data URIs and linked to other data (e.g. RDF) ★★★★☆ Linkable data - served at URIs (e.g.