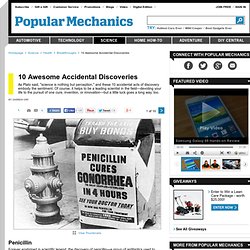 " All right, so that's actually a quote from Michael Fassbender in (Prometheus,) but nothing could be more true for radio astronomer duo Robert Wilson and Arno Penzias. The secret to discovering the prevailing theory to how the universe was made began with noise, like common radio static. In 1964, while working with the Holmdel antenna in New Jersey, the two astronomers discovered a background noise that left them perplexed. After ruling out possible interference from urban areas, nuclear tests, or pigeons living in the antenna, Wilson and Penzias came across an explanation with Robert Dicke's theory that radiation leftover from a universe-forming big bang would now act as background cosmic radiation. ITER - the way to new energy. The Center for Science and Democracy. The official opening of the Center will be marked by two launch events, one on each coast, featuring panel discussions with eminent scientists, journalists and public servants.

Links to webcasts of the events are available on the launch events page . East Coast Science and Democracy in Turmoil: Restoring a Great American Relationship. Science and Spirituality. 24,000-Year-Old Siberian Boy Sheds New Light on Origins of Native Americans. The genome sequence of a 24,000-year-old young Siberian individual found in Russia shows that 14 to 38 percent of modern Native American’s ancestry came from this youngster’s gene pool, suggesting First Americans came directly from Siberia. 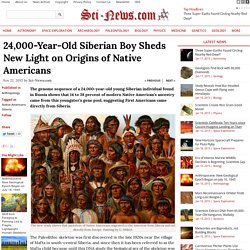 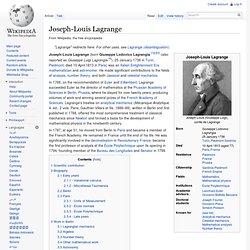 He made significant contributions to the fields of analysis, number theory, and both classical and celestial mechanics. In 1766, on the recommendation of Euler and d'Alembert, Lagrange succeeded Euler as the director of mathematics at the Prussian Academy of Sciences in Berlin, Prussia, where he stayed for over twenty years, producing volumes of work and winning several prizes of the French Academy of Sciences. Lagrange's treatise on analytical mechanics (Mécanique Analytique, 4. ed., 2 vols. Scientist Prove DNA Can Be Reprogrammed by Words and Frequencies. 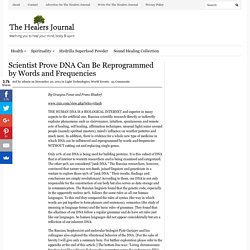 Who=vitaeb THE HUMAN DNA IS A BIOLOGICAL INTERNET and superior in many aspects to the artificial one. Russian scientific research directly or indirectly explains phenomena such as clairvoyance, intuition, spontaneous and remote acts of healing, self healing, affirmation techniques, unusual light/auras around people (namely spiritual masters), mind’s influence on weather patterns and much more. In addition, there is evidence for a whole new type of medicine in which DNA can be influenced and reprogrammed by words and frequencies WITHOUT cutting out and replacing single genes. 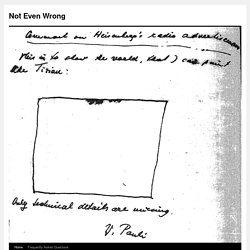 One surprising thing I learned from the interview is that Witten learned Calculus when he was 11 (this would have been 1962). He quite liked that, but then lost interest in math for many years, since no one gave him more advanced material to study. After years of studying non math/physics subjects and doing things like working on the 1972 McGovern campaign, he finally realized physics and math were where his talents lay. He ended up doing a Ph.D. at Princeton with David Gross, starting work with him just months after the huge breakthrough of asymptotic freedom, which put in place the final main piece of the Standard Model. If only back in 1962 someone had told Witten about linear algebra and quantum mechanics, the entire history of the subject could have been quite different. About the landscape: Laboratoire de Didactique et d'Epistémologie des Sciences. 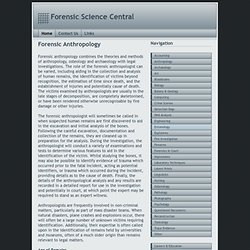 The role of the forensic anthropologist can be varied, including aiding in the collection and analysis of human remains, the identification of victims beyond recognition, the estimation of time since death, and the establishment of injuries and potentially cause of death. The victims examined by anthropologists are usually in the late stages of decomposition, are completely skeletonised, or have been rendered otherwise unrecognisable by fire damage or other injuries.

The forensic anthropologist will sometimes be called in when suspected human remains are first discovered to aid in the excavation and initial analysis of the bones. Roll Over, Pythagoras: the "Holy Grail" of Math May Have Been Found. What's the Big Idea? 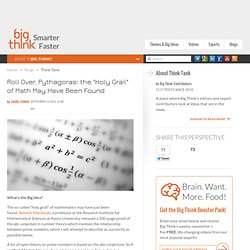 The so-called "holy grail" of mathematics may have just been found. Shinichi Mochizuki, a professor at the Research Institute for Mathematical Sciences at Kyoto University, released a 500-page proof of the abc conjecture in number theory which involves the relationship between prime numbers, which I will attempt to describe as succinctly as possible below. A lot of open theory on prime numbers is based on the abc conjecture. So if verified, Mochizuki's proof would mean a great leap forward in our understanding of primes.

It could also be used to help simplify other complex proofs, such as Fermat's last theorem. This is high-level mathematics, which is even inaccessible to many mathematicians. Part I Part II Part III Part IV Mochizuki is a math genius who received his Ph.D from Princeton University at the age of 22 and hasn't slowed down since. Fluid Dynamics. Mandeloculars on Behance. Fibonacci sacred geometry.