Blogs. Twitter lists. Biologist wants to 'make the world a better place' US evolutionary biologist David Sloan Wilson was in the UK last month to talk about the field study he has been running for six years in his home town of Binghamton, New York State, in economic decline. 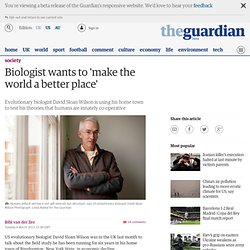 "There are things that are natural to a field biologist, and one of them is to study species in their natural environment," explains Wilson. "Jane Goodall [famous for her studies of chimpanzees] has the Gombe Stream Park [Tanzania] and Darwin's finches are studied in the Galápagos, so why don't we study humans in the context of their everyday life? " In 2006, Wilson decided to study the 47,000 residents of Binghamton. He hoped that by observing, making predictions based on his theories and then staging interventions to see if those predictions are confirmed, the field study would generate evidence for his evolutionary theories and, in the process "make the world a better place too". 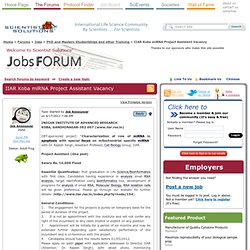 The Six Epochs of Life — a mural by Nick Mayer inspired by Ray Kurzweil’s The Singularity Is Near. The Six Epochs of Life mural was commissioned by Martine and Bina Rothblatt in the summer of 2008 to be painted on a bare concrete wall at Estate Marbina Abenaki’s Terasem Center of Critical Consciousness. 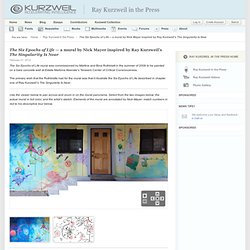 Scientists document first consumption of abundant life form, Archaea. CORVALLIS, Ore. – A team of scientists has documented for the first time that animals can and do consume Archaea – a type of single-celled microorganism thought to be among the most abundant life forms on Earth. 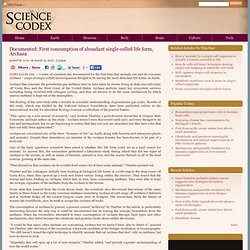 Archaea that consume the greenhouse gas methane were in turn eaten by worms living at deep-sea cold seeps off Costa Rica and the West Coast of the United States. Archaea perform many key ecosystem services including being involved with nitrogen cycling, and they are known to be the main mechanism by which marine methane is kept out of the atmosphere. The finding of this new study adds a wrinkle to scientific understanding of greenhouse gas cycles. Home. How Life Evolved on Earth, Alien Life Evolution. Clues to how life evolved, not only on this planet but also possibly on alien worlds, might be found in underwater caves in the Bahamas, researchers say. 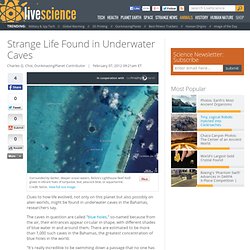 The caves in question are called "blue holes," so-named because from the air, their entrances appear circular in shape, with different shades of blue water in and around them. There are estimated to be more than 1,000 such caves in the Bahamas, the greatest concentration of blue holes in the world. "It's really incredible to be swimming down a passage that no one has ever been in before, to experience that thrill of discovery," said researcher Tom Iliffe, a marine biologist at Texas A&M University at Galveston. "At the bottom of a cave, there's no telling what might be around the next corner. " Iliffe and his colleagues examined three inland blue holes in the Bahamas. "We're finding new forms of life that are totally unknown elsewhere on Earth," Iliffe told OurAmazingPlanet. Blue hole bacteria 'Natural laboratories'

Microbes found thriving in Mars-like conditions. The discovery of microbes in any icy lava tube in Oregon raises hope that similar microorganisms could survive in the very similar conditions to be found on Mars. The microbes are coping with near-freezing temperatures and low levels of oxygen, and can even grow in the absence of organic food. How to Make Life from the Primordial Soup. BBC Radio 4 Programmes - Frontiers, Acts of Creation. Artificial life and the RNA world. By Matthew Cobb Two things come together from earlier this year. 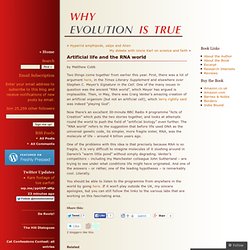 First, there was a lot of argument here, in the Times Literary Supplement and elsewhere over Stephen C. Meyer’s Signature in the Cell. One of the many issues in question was the ancient “RNA world”, which Meyer has argued is implausible. Then, in May, there was Craig Venter’s amazing creation of an artificial organism (but not an artificial cell), which Jerry rightly said was indeed “playing God”. Now there’s an excellent 30-minute BBC Radio 4 programme “Acts of Creation” which puts the two stories together, and looks at attempts round the world to push the field of “artificial biology” even further. One of the problems with this idea is that precisely because RNA is so fragile, it is very difficult to imagine molecules of it sloshing around in Darwin’s “warm little pond” without simply degrading.