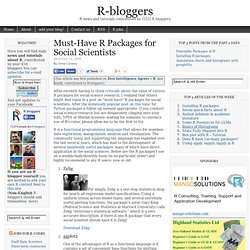 After the immensely popular post on this topic for Python packages a follow-up seemed appropraite. If you conduct social science research but are desperately clinging onto your SAS, SPSS or Matlab licenses; waiting for someone to convince you of R’s value, please allow me to be the first to try. R is a functional programming language that allows for seamless data exploration, manipulation, analysis and visualization. The community using and supporting the language has exploded over the last several years, which has lead to the development of several immensely useful packages, many of which have direct application in the social sciences. Below are the R packages I use on a weekly/daily/monthly basis (in no particular order) and highly recommend to any R users; new or old. 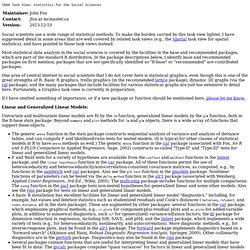 To make the burden carried by this task view lighter, I have suppressed detail in some areas that are well covered by related task views (e.g., the Spatial task view for spatial statistics), and have pointed to those task views instead. Most statistical data analysis in the social sciences is covered by the facilities in the base and recommended packages, which are part of the standard R distribution. In the package descriptions below, I identify base and recommended packages on first mention; packages that are not specifically identified as "R-base" or "recommended" are contributed packages. If I have omitted something of importance, or if a new package or function should be mentioned here, please let me know. Linear and Generalized Linear Models: Univariate and multivariate linear models are fit by the lm function, generalized linear models by the glm function, both in the R-base stats package.

Other Regression Models: The EMU Speech Database System. Package emu. S Routines for Social Network Analysis in the R Environment. Most of which involve social network analysis, though a wee bit 'o other stuff is available as well.... Introduction and Caveats This page serves, as one might expect, to allow other researchers to access some of the data analysis tools I've developed in the S language. The implementation of S used here is that of the R Statistical Computing Environment , rather than the common alternative of S-PLUS ; the intrepid could doubtless port these routines from one flavor of the language to the other, however.

Caveats: This software is provided on an unsupported, as-is basis, under the terms of the GNU Public License . It is not guaranteed to be bug-free, let alone efficient; use it at your own risk. Getting and Using R The R statistical computing environment is distributed under the GNU Public License , and can be freely obtained either as source or as precompiled binaries for a wide range of platforms. TraMineR. Package TraMineR. This package is a toolbox for sequence manipulation, description, rendering and more generally the mining of sequence data in the field of social sciences. 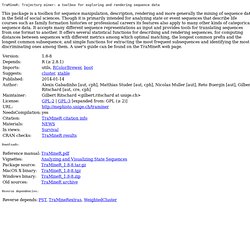 Though it is primarily intended for analyzing state or event sequences that describe life courses such as family formation histories or professional careers its features also apply to many other kinds of categorical sequence data. It accepts many different sequence representations as input and provides tools for translating sequences from one format to another. It offers several statistical functions for describing and rendering sequences, for computing distances between sequences with different metrics among which optimal matching, the longest common prefix and the longest common subsequence, and simple functions for extracting the most frequent subsequences and identifying the most discriminating ones among them. A user's guide can be found on the TraMineR web page. Downloads: Reverse dependencies: Extension Rgrs pour R.