18 Ways to Improve Your Body Language 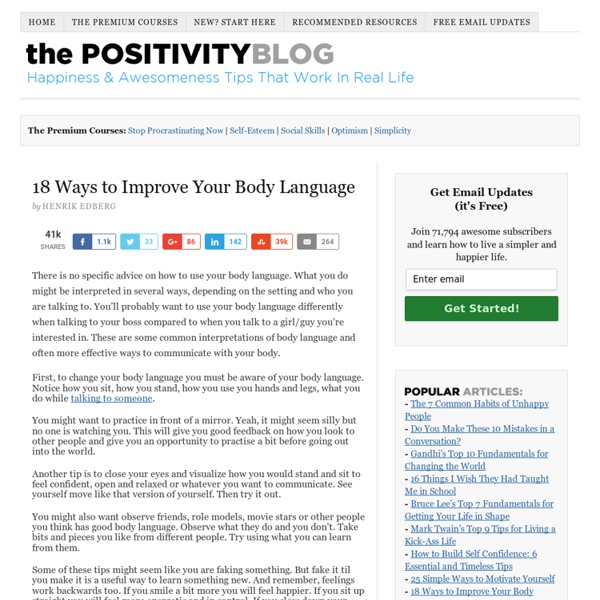 There is no specific advice on how to use your body language. What you do might be interpreted in several ways, depending on the setting and who you are talking to. You’ll probably want to use your body language differently when talking to your boss compared to when you talk to a girl/guy you’re interested in. These are some common interpretations of body language and often more effective ways to communicate with your body. First, to change your body language you must be aware of your body language. Notice how you sit, how you stand, how you use you hands and legs, what you do while talking to someone. You might want to practice in front of a mirror. Another tip is to close your eyes and visualize how you would stand and sit to feel confident, open and relaxed or whatever you want to communicate. You might also want observe friends, role models, movie stars or other people you think has good body language. Some of these tips might seem like you are faking something. 1. 2. 3. 4. 5. 6. 7.

Body Language Basics From a flip of the hair to hands on your hips, how you move, gesture, and make expressions can say as much as what comes out of your mouth. Why do I need to register or sign in for WebMD to save? We will provide you with a dropdown of all your saved articles when you are registered and signed in. 8 Keys to Instant Charisma Photo by Bertrand There is a simple fact of human nature that states we all want to be liked. Don’t be afraid to admit it. The Wrong Body Language You're automatically signed up for the Inc. Wire, so you never miss a single day's most important news, tips, or ideas. Roll over the name of the other Inc. newsletters to see how you can get great Inc. articles on the topics that matter most to you.

Why Smart People Are Stupid Editors’ Note: The introductory paragraphs of this post appeared in similar form in an October, 2011, column by Jonah Lehrer for the Wall Street Journal. We regret the duplication of material. Here’s a simple arithmetic question: A bat and ball cost a dollar and ten cents. The 4 Ways You Can Use Body Language To Influence Success If you see someone frowning, head bowed, shoulders slumped, it’s a fair bet they’re feeling low in confidence. But which came first: the slumped shoulders or the bad mood? Your body language doesn’t merely reflect your emotions, it’s often the cause. By learning some of the principal ways that your own posture, gestures, facial expression and even tone of voice affect your mind, you will be more aware of the factors influencing your mood, and give yourself an edge in presentations and negotiations. 1.

Hacking Toward Happiness Beneath the bits and bytes that shape the character of Silicon Valley, there's a booming digital subculture committed to the art of self-improvement, geek style. It's known as life hacking, and it's all about sweating out the best ways to crank through e-mail, sabotage spam, boost productivity and in general be happier. British tech guru Danny O'Brien coined the term at a 2004 technology conference after studying how programmers come up with "hacks," or shortcut solutions for routine but time-consuming problems. The trick, he says, is not to worry about the entire problem but to find a small fix to get... Subscribe Now Body Language Signals: Eye Directions, Pupils Warning! Reading body language is like listening to someone. Listed here are the possible meanings of many different body language signs. To avoid getting it wrong, please start with the short section “How Can You Read What People Think?” at the bottom of this page. The Eyes (Part II)

Cognitive Distortions And Socializing Many of the problems and conflicts people face are sustained in part by distorted, maladaptive thinking: Someone who's shy often sees other people as more critical and judgmental than they really are. A person struggling with anxiety may see the world as exaggeratedly dangerous, and underestimate their ability to cope. Interview questions Interviewers aren't always the most original bunch and often fall back on the same sorts of questions. Which is handy, because it means you can prepare answers to the type of generic interview questions we’ve listed below (along with some suggested answers). Question: "Why do you want this job?" Suggested answers: You believe you've taken your current role as far as you can and you’re looking for a fresh challenge.

Eye Movement and Lying - How to detect lies Interesting Info -> Lying Index -> Eye Direction & Visual Accessing Cues Eye Movement and Direction & How it Can Reveal Truth or Lies This is a continuation of our previous article Detecting Lies. Many comments by our visitors asked about how eye direction can indicate the presence of a lie. Can the direction a person's eyes reveal whether or not they are making a truthful statement? Short answer: sort of. Five ways to do better in phone interviews The last phone interview I did was for my job at the Boston Globe. And let me just confess that I wasn’t that great in the interview, and I stressed a lot afterwards about not getting the job. But, of course, I did get the job, which I think might be evidence that I write so much about career advice that I am becoming way too hard on myself. At any rate, I have done tons of phone interviews—on both sides of the hiring equation—so when Sia asked me to write a post on how to do a phone interview, I was surprised that I hadn’t written one already. (Although I have written a bunch about interviews.)

How to Learn Speed Reading Steps Part 1 Learning to Speed Read <img alt="Image titled Learn Speed Reading Step 1" src=" width="728" height="546" class="whcdn" onload="WH.performance.clearMarks('image1_rendered'); WH.performance.mark('image1_rendered');">1Stop talking to yourself. Almost every reader "subvocalizes," or moves their throat as they imagine speaking the words.[1] This may help the reader remember concepts, but it's also a major barrier to speed.[2][3] Here are a few ways to keep this habit to a minimum: Chew gum or hum while you read. This occupies muscles used to subvocalize.If you move your lips as you read, hold a finger against them.

* Randomness as Meaning Introduction This article describes how, in our search for order and purpose in life, people sometimes assign meaning to events that are objectively random and devoid of meaning. Consider these two images — one dot pattern is random, the other isn't: One of the two images above shows a random pattern of dots, the other has been manipulated to resemble a random pattern but isn't really random.

This website provides various ways to improve the body language of a speaker, such as not folding your arms and legs, always remembering to smile and sit up straight when listening to your fellow presentation group mates. by zhenhan Jan 27

By suresh The main important of body language is maintains an eye contact with the audience and also able to smile to engage with them as well. by sureshhey Jan 24