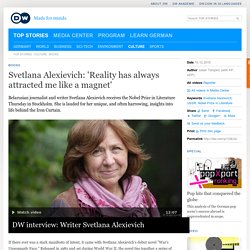 " Released in 1985 and set during World War II, the novel ties together a series of moving and often stark monologues on the brutality and hopelessness of war - all told by women and children. Alexievich made no illusions: she was going to toe no one else's line. For those new to Alexievich's work, the Swedish Academy has recommended starting by reading that "War's Unwomanly Face. " The innovative writer has "mapped the soul" of the Soviet and post-Soviet people, said the Academy. The Nobel Prize is presented to Alexievich in a ceremony in Stockholm on Thursday (10.12.2015), the anniversary of Alfred Nobel's death. First-hand account of Soviet Union's disintegration It's her audacious determination to tell such brutally real stories that had Alexievich on the run for a decade.

A Conversation with Svetlana Alexievich By Ana Lucic. ANA LUCIC: Voices from Chernobyl is a startling, emotional book. 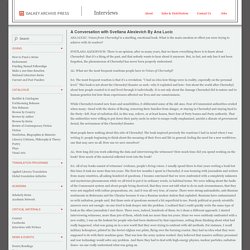 What is the main emotion or effect you were trying to achieve with its readers? SVETLANA ALEXIEVICH: There is an opinion, after so many years, that we know everything there is to know about Chernobyl: that it’s a thing of the past, and that nobody wants to hear about it anymore. But, in fact, not only has it not been forgotten, the phenomenon of Chernobyl has never been properly understood. AL: What are the most frequent reactions people have to Voices of Chernobyl? SA: The most frequent reaction is that it’s a revelation: “I had no idea how things were in reality, especially on the personal level.” While Chernobyl created new fears and sensibilities, it obliterated some of the old ones. Most people knew nothing about this side of Chernobyl. AL: How long did you work collecting the data and interviewing the witnesses? SA: All of my books consist of witnesses’ evidence, people’s living voices.

See Also: Svetlana Alexievich - Interview. "I am not a cool chronicler. 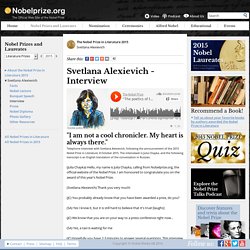 My heart is always there. " Telephone interview with Svetlana Alexievich, following the announcement of the 2015 Nobel Prize in Literature, 8 October 2015. The interviewer is Julia Chayka, and the following transcript is an English translation of the conversation in Russian. (Julia Chayka) Hello, my name is Julia Chayka, calling from Nobelprize.org, the official website of the Nobel Prize.

I am honoured to congratulate you on the award of this year's Nobel Prize. (Svetlana Alexievich) Thank you very much! (JC) You probably already know that you have been awarded a prize, do you? (SA) Yes I know it, but it is still hard to believe that it's true! (JC) We know that you are on your way to a press conference right now… (SA) Yes, a taxi is waiting for me (JC) Hopefully you have 2-3 minutes to answer several questions.

(SA) Yes, sure. (JC) We would like to ask you about you reaction, what are you feelings about the Prize? (JC) Thank you for these beautiful words. Svetlana Alexievich - Voices from Big Utopia - Home Page, Swetlana Alexijewitsch. "I'm searching life for observations, nuances, details. 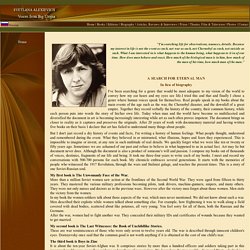 Because my interest in life is not the event as such, not war as such, not Chernobyl as such, not suicide as such. What I am interested in is what happens to the human being, what happens to it in of our time. How does man behave and react. How much of the biological man is in him, how much of the man of his time, how much man of the man. " I've been searching for a genre that would be most adequate to my vision of the world to convey how my ear hears and my eyes see life.I tried this and that and finally I chose a genre where human voices speak for themselves.

But I don't just record a dry history of events and facts, I'm writing a history of human feelings. My first book is The Unwomanly Face of the War. My second book is The Last Witnesses: the Book of Unchildlike Stories. The third book is Boys in Zinc It is about the ten-year Soviet-Afghan war.