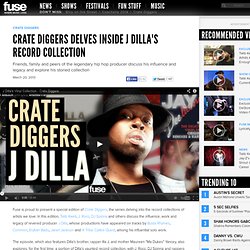 In this edition, Talib Kweli, J. Rocc, DJ Spinna and others discuss the influence, work and legacy of revered producer J Dilla, whose productions have appeared on tracks by Busta Rhymes, Common, Erykah Badu, Janet Jackson and A Tribe Called Quest, among his influential solo work. The episode, which also features Dilla's brother, rapper Illa J, and mother Maureen "Ma Dukes" Yancey, also explores, for the first time, a portion of Dilla's vaunted record collection, with J. Rocc, DJ Spinna and rappers Frank Nitt and Grap Luva explaining each record's significance and history. Check out the mini-doc above for much more. Madlib dans Radio Vinyle #32 sur France Inter. Tresor Reflects On 20 Years. Long before Berlin’s nightlife narrative was dominated by Berghain, Bar 25 or Watergate, there was Tresor, a bunker in the city center with a killer sound system pumping out the most uncompromising electronic music known to man or woman. 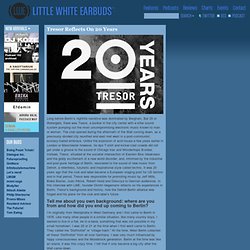 Industry standards: Funktion-One. You can fill a DJ booth with the best record and CD decks, screw the perfect cartridges onto your turntables and plug a fine pair of headphones into your mixer of choice, but without a soundsystem, it's really all just metal and plastic. 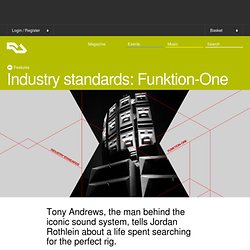 And if you've spent any time in a club with too little sound, too much sound or too much distortion—in other words, a club without a good soundsystem—you may wish none of it had ever been wired up in the first place. What makes one bit of DJ gear better than another is often open to interpretation, as I discussed in last month's feature on turntable cartridges. What makes a soundsystem exceptional isn't so subtle. A good club or festival rig should be loud but clear, immersive but spacious, smooth but also tight and punchy. Audio engineers and acousticians can quantify these traits through this or that measure, but the rest of us can feel the difference. Andrews' interest in building loudspeakers dates to the late '60s.

Sub Berlin -"The Story of Tresor" (Documentary) Underground Resistance Interview. ‪Hi Tech Soul - The Creation Of Techno Music (Part 1 of 9)‬‏ Jeff Mills AKA The Wizard: “I don’t expect it to ever truly end. Ever.” Jeff Mills is a musician who has been at the forefront of techno music for over two decades now, having been involved with the genre since its infancy, and working as a DJ way before the music even existed. 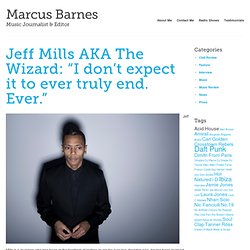 Highly regarded thanks to his forward-thinking approach to music, soundtracking the future in his own inimitable way, Jeff Mills is a highly regarded proponent of high-quality, innovative music and live performances. This year his record label, Axis, celebrates its 20th anniversary and to coincide with the anniversary he has compiled a huge book documenting some of the visual projects that have released in conjunction with the label.

I was very fortunate to be able to speak to Jeff about his story so far, here’s the full version of the interview… It’s been 20 years since Axis started, what was your original intention with the label? The initial objective was to create a label that constantly focused on bringing forth theories and subjects that related to everyone. Normal things. Yes. Mark Flash & DJ Dex (UR): how Techno is perceived in USA ?... Universal Techno - Arte Thema (1996) Part 1/7. Once upon a time there was techno : an interview with Dj Skurge from Underground Resistance. The main surprise from the last GéNéRiQ festival was obvisouly the coming of the legendary producers from Underground Resistance. 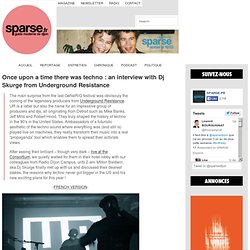 UR is a label but also the name for an impressive group of producers and djs, all originating from Detroit such as Mike Banks, Jeff Mills and Robert Hood. They truly shaped the history of techno in the 90′s in the United States. Ambassadors of a futuristic aesthetic of the techno sound where everything was (and still is) played live on machines, they really transform their music into a real “propaganda” tool which enables them to spread their activists views.After seeing their brilliant – though very dark – live at the Consortium, we quietly waited for them in their hotel lobby with our colleagues from Radio Dijon Campus, until 2 am.

Milton Baldwin, aka Dj Skurge finally met up with us and discussed their dearest stakes, the reasons why techno never got bigger in the US and his new exciting plans for this year ! How did the show go tonight ? Red Bull Music Academy: Theo Parrish @ RTS.FM - 10.07.2009: Master Class. Theo Parrish - Detroit DJ / Producer. Video explains the world's most important 6-sec drum loop. Pump Up The Volume - Part 1 - The History Of House Music. Inside House - House Music Documentary. Between The Beats: Motor City Drum Ensemble. Music Man Murray (movie) The Loudness War. The Rise of the fake DJ.