A computer science portal for geeks 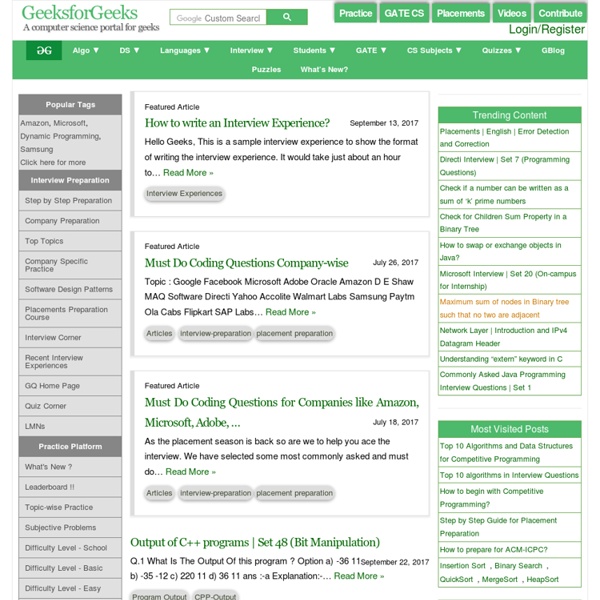 SVG and CSS - Cascading Style Sheets It is possible to style your SVG shapes using CSS. By styling is meant to change the looks of the shapes. This can be stroke color and width, fill color, opacity and many other properties of your shapes. There are 6 ways to style the shapes in your SVG images.

Algo Muse 16-1 In the box There are n identical boxes in which 2n balls are equally distributed. The balls are labelled from 1 to 2n. We don't know which ball is in which box, but do know that each box contains two balls. Sorting Applications Sorting algorithms and priority queues are widely used in a broad variety of applications. Our purpose in this section is to briefly survey some of these applications. Sorting various types of data. Demo of a simple CRUD RESTful PHP service used with AngularJS and MySQL <?php require_once("Rest.inc.php"); class API extends REST {

Practice and Learn - Google Code Jam On this page you can see results and code from past rounds of Google Code Jam, and you can try the problems for yourself. If you're new to Code Jam, try following the Quick-Start Guide. Where should I start? If you're new to programming contests, we highly recommend starting with the least difficult problems and moving up from there as you get more confident. What not to do during an interview Whenever you find yourself doing one of the following things during an interview, just don’t. OK? Don’t suck at something you say you’re an expert at Seriously, how often do I talk to Java experts who don’t know how to use the most basic java.util classes? Or bash experts who don’t know how to grep? Or 3D math experts who don’t know anything about the dot and cross products?

Interview Questions A group of N high school students wants to play a basketball game. To divide themselves into two teams they first rank all the players in the following way: Players with a higher shot percentage are rated higher than players with a lower shot percentage. If two players have the same shot percentage, the taller player is rated higher. Luckily there are no two players with both the same shot percentage and height so they are able to order themselves in an unambiguous way. Based on that ordering each player is assigned a draft number from the range [1..N], where the highest-rated player gets the number 1, the second highest-rated gets the number 2, and so on. Lecture Slides for An Introduction to the Analysis of Algorithms These slides are for the first half of an undergraduate course taught at Princeton, developed to provide an overview of An Introduction to the Analysis of Algorithms and Analytic Combinatorics. The course format is "introduce-read-discuss". We introduce a set of topics in lecture; students read about the topics and work selected exercises between lectures, and we discuss any questions about the reading and the exercises at the beginning of the next lecture.

Using Uninitialized Memory for Fun and Profit This is the story of a clever trick that's been around for at least 35 years, in which array values can be left uninitialized and then read during normal operations, yet the code behaves correctly no matter what garbage is sitting in the array. Like the best programming tricks, this one is the right tool for the job in certain situations. The sleaziness of uninitialized data access is offset by performance improvements: some important operations change from linear to constant time. Alfred Aho, John Hopcroft, and Jeffrey Ullman's 1974 book The Design and Analysis of Computer Algorithms hints at the trick in an exercise (Chapter 2, exercise 2.12): Develop a technique to initialize an entry of a matrix to zero the first time it is accessed, thereby eliminating the O(||V||2) time to initialize an adjacency matrix.

Introduction to Programming in Java: An Interdisciplinary Approach a textbook for a first course in computer sciencefor the next generationof scientists and engineers Textbook. Our textbooks Introduction to Programming in Java [Amazon · Pearson · InformIT ] and Computer Science [Amazon · Pearson · InformIT ] are an interdisciplinary approach to the traditional CS1 curriculum with Java. We teach the classic elements of programming, using an "objects-in-the-middle" approach that emphasizes data abstraction. We motivate each concept by examining its impact on specific applications, taken from fields ranging from materials science to genomics to astrophysics to internet commerce.

The Many Faces of Functions in JavaScript - - Bocoup If you’ve had any contact with JavaScript code, you’re probably very familiar with how to define and call functions, but are you aware of of how many different ways you can define a function? This is a common challenge of writing and maintaining tests in Test262—especially when a new feature comes into contact with any existing function syntax, or extends the function API. It is necessary to assert that new or proposed syntax and APIs are valid, against every existing variant in the language.