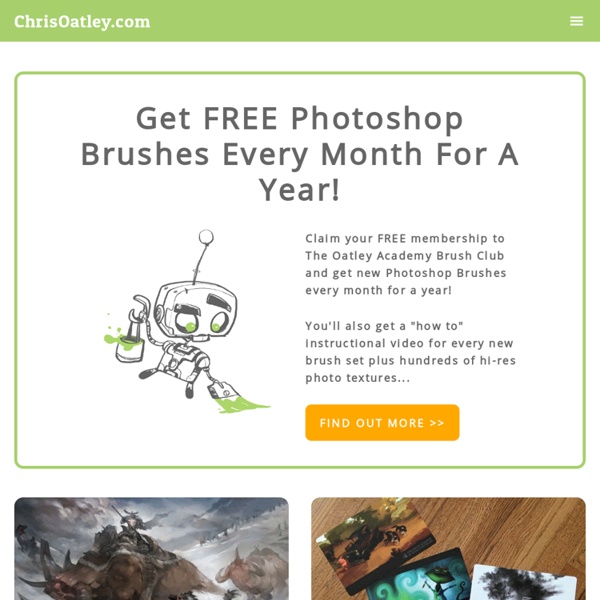 Craig Mullins, Iain McCaig and Neville Page got it all wrong… If you want to be a successful concept artist, don’t follow their example. It’s far too risky. If they knew anything about concept art, they would stop producing such ground-breaking/ mind-blowing/ industry-defining work and just stick to slight variations of the familiar… Of course, I’m being facetious. In part one of this series, I challenged aspiring concept artists to consider the “concept” part of “concept art.”

Every Frame a Painting This is the first of two new videos today. Watch this one first. Off the top of your head, could you sing the theme from Star Wars? How about James Bond? Or Harry Potter? But here’s the kicker: can you sing any theme from a Marvel film? J.C. Leyendecker Prints and Posters - Global Gallery J.C. Leyendecker Born in Montabaur, Germany, and came to America at the age of eight. Showing an early interest in painting, he got his first job at the age of sixteen (16) in a Chicago engraving house on the strength of some large pictures he had painted on kitchen oilcloth. In the evenings after work, he studied under Vanderpoel at the Chicago Art Institute, and saved for five years to be able to go to France to attend the Academie Julian in Paris.

PSG Art tutorial Foreword I believe there is logic behind why a picture works or not. I also believe that humans are meat machines, and that one day computers will be able to emulate humans and what we do. Since logic can be formulated into rules, guidelines and theories, these can be shared.

Stand Still. Stay Silent - webcomic, page 1 Page 1 1 Nov. 2013 Yessss! It has begun! With a rather non-postapocalyptic cover for the prologue of a postapocalyptic tale. Digital Painting In Photoshop: The Magic Box Learn HUNDREDS Of Digital Painting Pro Workflows, Techniques & Time-Savers Step-By-Step! Detail image from my ‘Animal Farm’digital painting for ImagineFX Magazine.[ click to enlarge ] Digital painting is powerful. The various effects and moods you can achieve with Photoshop and a digital tablet now seem infinite. The speed at which you can craft a beautiful image of an imagined world is mind-blowing.

Dr. Grob's Animation Review Director: Tim Burton & Mike JohnsonRelease Date: September 23, 2005Rating: ★★★★Review: The shy Victor and Victoria are forced by their unsympathetic parents to marry each other. Luckily, they actually like each other, but then Victor accidentally marries the deceased Emily who takes him to a world underground, while Victoria is forced to marry the evil lord Barkis… ‘Corpse Bride’ is a typical Tim Burton film, especially in its art direction, in its 19th century, gothic setting, in its dark humor, and in its jolly portrait of death. Because the film is also a Danny Elfman-penned musical, it feels like a successor to ‘The Nightmare before Christmas’ (1993). Nevertheless, it is far more enjoyable than that sometimes tiresome film: ‘Corpse Bride’ features only three songs, two of which help to tell the story.

A Lesson on Character Design by 'SpongeBob' Artist Robertryan Cory Robert Ryan Cory, a veteran character designer on SpongeBob SquarePants and Secret Mountain Fort Awesome, has posted a helpful set of notes from a character design lecture he presented recently to CalArts animation students. Digital Painting 101: Mixing Paint @mihai.birsan Yes, Photoshop CS5 do have this feature, but its now really that easy to use comprare to ArtRage, Corel Painter or Paint Tool SAI etc. The article above are the most essential way to do color mixing/ Blending by yourself, and useable across many painting application too. Sometimes it is good to get away from the gradient tool and selections.

Tutorials – Enliighten Figure Painting – Reclining Female Figure This is a short preview of the Figure Painting – Reclining Female Figure demo. In this section of the demo, Daarken shows his process for painting the face. animationstudies 2.0 As a film-maker who has become further and further drawn into the world of animated documentary, what has enthralled and inspired me is the overt subjectivity of exploring the world through animation; free from the ‘baggage’ of objectivity implied in… Read more → My local fish and chip shop has a sign in its window that says, in a large font: “CAT FISH – 75p” Just below, in a smaller font, it says “Fish for your cat” This sign always makes… How to make birds fly good 10. Put some effort in Now we have gone some way to creating a realistic cycle, but what if we have to show our character flying under strain? Perhaps carrying something heavy.

FREE Andrew Loomis Art Instruction Downloads The great Andrew Loomis created several amazing and useful books on Illustration, Drawing, and Painting. These rare, out-of-print books are free to distribute, and Illustration Age is honored to offer the following free downloads in pdf format. Please help to spread the word by sharing this post with your fellow artists. Also be sure to browse our own selection of self-published ebooks and audiobooks! Creative Illustration