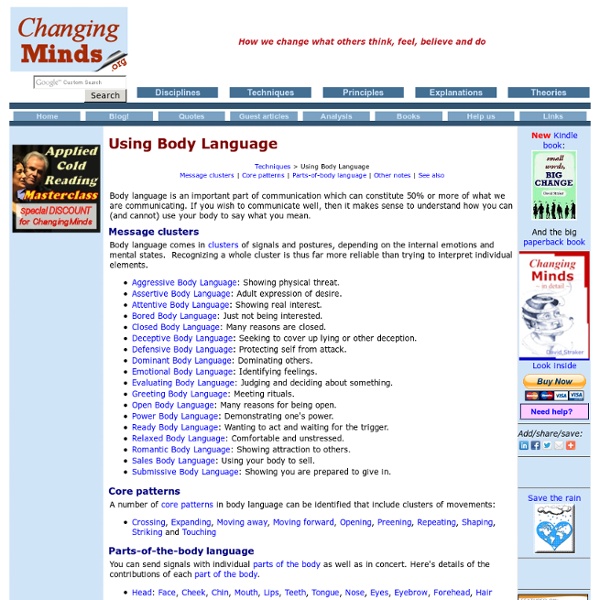 Techniques > Using Body Language Message clusters | Core patterns | Parts-of-body language | Other notes | See also Body language is an important part of communication which can constitute 50% or more of what we are communicating. If you wish to communicate well, then it makes sense to understand how you can (and cannot) use your body to say what you mean. Message clusters Body language comes in clusters of signals and postures, depending on the internal emotions and mental states. Aggressive Body Language: Showing physical threat. Core patterns A number of core patterns in body language can be identified that include clusters of movements: Crossing, Expanding, Moving away, Moving forward, Opening, Preening, Repeating, Shaping, Striking and Touching Parts-of-the-body language You can send signals with individual parts of the body as well as in concert. Other notes 5 Cs of Body Language: How to effectively understand body language. See also

Body Language Bodily orientation (the degree to which one interactant’s shoulders and legs are turned toward, rather than away from, the other interactant): · Standing individuals interact with more direct orientation with those of higher status than with those of lower status. Open and closed bodily positions (with open positions consisting of knees apart, legs stretched out, elbows away from body, hands not touching, legs uncrossed, etc., and closed positions consisting of legs crossed at either knees or ankles, hands folded on lap, arms crossed, etc · Individuals with open body positions are perceived more positively than those with closed body positions. · Individuals with open body positions are more persuasive than those with closed body positions. Trunk lean (the direction in which one interactant positions his or her trunk, forward / toward or backward / away from, in relation to the other interactant): Postural positions: Gestures (hand and arm movements): Head movements: Common Gesture Meanings

Political Body Language An analysis of body language in the last two sets of presidential debates reveals that the candidates — two right-handers in 2004, two lefties in 2008 — used their dominant hands for gestures while they were making a positive statement, and relied more frequently on their nondominant side when making a negative statement. The findings of the Dutch study support the "body-specific hypothesis," which links the content of our minds to the structure of our bodies. They also confirm prior work in the laboratory showing that individuals link their dominant side with positive things – like intelligence, goodness – while associating their nondominant side with more negative attributes. The last two U.S. presidential elections offered an unprecedented opportunity to test this theory with regard to speech and body language, said Daniel Casasanto of the Max Planck Institute for Psycholinguistics, in the Netherlands. Coded body language Reverse preference

Top 10 Common Faults In Human Thought Humans The human mind is a wonderful thing. Cognition, the act or process of thinking, enables us to process vast amounts of information quickly. For example, every time your eyes are open, you brain is constantly being bombarded with stimuli. You may be consciously thinking about one specific thing, but you brain is processing thousands of subconscious ideas. Unfortunately, our cognition is not perfect, and there are certain judgment errors that we are prone to making, known in the field of psychology as cognitive biases. The Gambler’s fallacy is the tendency to think that future probabilities are altered by past events, when in reality, they are not. Reactivity is the tendency of people to act or appear differently when they know that they are being observed. Pareidolia is when random images or sounds are perceived as significant. Interesting Fact: the Rorschach Inkblot test was developed to use pareidolia to tap into people’s mental states. Self-fulfilling Prophecy

Beliefs Explanations > Beliefs What do you believe? The answer is likely to be 'more than you realize'. We understand and manage the world around us through our beliefs, which may not be perfect, but which are largely useful. Changing minds very often means changing beliefs, which means the persuader should gain a good understanding of what these are, how they are formed and how they get changed. Articles on belief include: What Is Belief? If you can change a person's belief, you have a very powerful persuasion tool. Theories about belief, Preferences, Fowler's Faith Stage Theory, Overcoming Limiting Beliefs, Why science and religion are the same Blogs by subject: Belief, Changing Belief

A selection of interesting Medieval Names Medieval Names Here is a collection of interesting Medieval Names that I have collected. they come from a wide variety of sources. Also there is name places and title. Anything interesting when it comes to names. This is an ongoing list that is growing so bookmark this and check back. I have compiled this list of Medieval Names and places from a wide variety of sources including books, historical events and places, novels and many other sources. If you are a video game player and looking for an interesting name this is a great resource. Trying to put together a good Medieval name title like Sir John of Canterbury or Lord Markett the Brave? A web vistitor suggested I put a section for horse names. I am currently adding and updating a new section of names for gamers. New Section: A web visitor suggested I do Names for Dragons! I received an email from somebody with some great name suggestions. If you have ideas for Medieval names or you have suggestions send the webmaster an email!

Dimensions of Body Language Table Of Contents Introduction 1. In the Beginning ... 2. How to Detect Openness Intentional Use of the Palms to Deceive The Law of Cause and Effect Palm Power Our Audience Experiment An Analysis of Handshake Styles Who Should Reach First? 3. Smiling Is a Submission Signal Why Smiling Is Contagious How a Smile Tricks the Brain Practicing the Fake Smile Smugglers Smile Less Five Common Types of Smiles Why Laughter Is the Best Medicine Why You Should Take Laughter Seriously Why We Laugh and Talk, But Chimps Don't How Humor Heals Laughing Till You Cry How Jokes Work The Laughter Room Smiles and Laughter Are a Way of Bonding Humor Sells The Permanent Down-Mouth Smiling Advice For Women Laughter In Love Summary 4. 5. 6. How the Hands Talk On the One Hand... 7. 8. The Dilating Pupils Take the Pupil Test Women Are Better at It, as Usual Giving Them the Eye The Eyebrow Flash Eye Widening The 'Looking Up' Cluster How To Light The Fire In Men Gaze Behavior - Where Do You Look? 9. 10. 11. 12. 13.

List of gestures Gestures are a form of nonverbal communication in which visible bodily actions are used to communicate important messages, either in place of speech or together and in parallel with spoken words.[1] Gestures include movement of the hands, face, or other parts of the body. Physical non-verbal communication such as purely expressive displays, proxemics, or displays of joint attention differ from gestures, which communicate specific messages.[1] Gestures are culture-specific and can convey very different meanings in different social or cultural settings.[2] Gesture is distinct from sign language. Although some gestures, such as the ubiquitous act of pointing, differ little from one place to another, most gestures do not have invariable or universal meanings but connote specific meanings in particular cultures. A single emblematic gesture can have very different significance in different cultural contexts, ranging from complimentary to highly offensive.[3] Single hand gestures[edit] Thumb up

The Ten Most Revealing Psych Experiments Psychology is the study of the human mind and mental processes in relation to human behaviors - human nature. Due to its subject matter, psychology is not considered a 'hard' science, even though psychologists do experiment and publish their findings in respected journals. Some of the experiments psychologists have conducted over the years reveal things about the way we humans think and behave that we might not want to embrace, but which can at least help keep us humble. That's something. 1. 'Lord of the Flies': Social Identity Theory The Robbers Cave Experiment is a classic social psychology experiment conducted with two groups of 11-year old boys at a state park in Oklahoma, and demonstrates just how easily an exclusive group identity is adopted and how quickly the group can degenerate into prejudice and antagonism toward outsiders. Researcher Muzafer Sherif actually conducted a series of 3 experiments. 2. 3. 4. 5. 6. 7. 8. 9. 10. Turns out that it's all about framing.