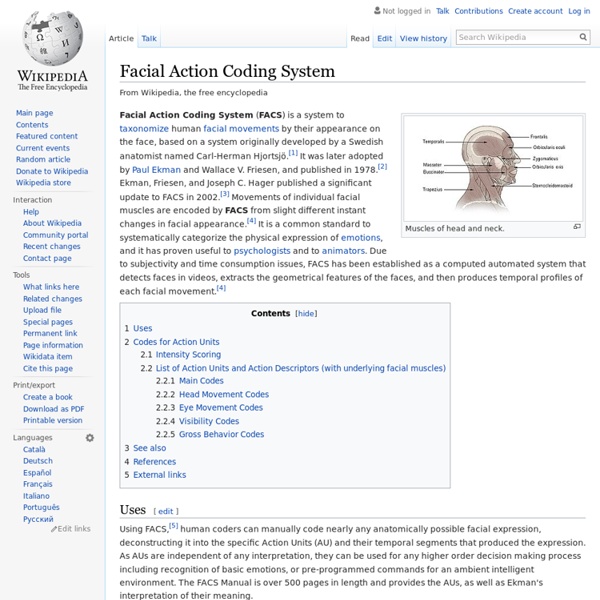 Muscles of head and neck. Facial Action Coding System (FACS) is a system to taxonomize human facial movements by their appearance on the face, based on a system originally developed by a Swedish anatomist named Carl-Herman Hjortsjö.[1] It was later adopted by Paul Ekman and Wallace V. Friesen, and published in 1978.[2] Ekman, Friesen, and Joseph C. Hager published a significant update to FACS in 2002.[3] Movements of individual facial muscles are encoded by FACS from slight different instant changes in facial appearance.[4] It is a common standard to systematically categorize the physical expression of emotions, and it has proven useful to psychologists and to animators. Due to subjectivity and time consumption issues, FACS has been established as a computed automated system that detects faces in videos, extracts the geometrical features of the faces, and then produces temporal profiles of each facial movement.[4] Uses[edit] FACS is designed to be self-instructional. Main Codes[edit]

Dark Geology: The Mechanism of a Mystery - From Quarks to Quasars Image: FQTQ/Matt Hunter Earth is often taken for granted, and when dealing with the Universe, it is very easy to lose sight of just how rare it is that we can be here– a sentient species numbering 7,066,333,655 as of 23:24 UTC (EST+5) Sep 14, 2012 (time of the original writing). Moreover, an advancing knowledge of all that is around us, and the curiosity and aptitude to drive us further. I would like to take you over some of the amazing details of our own, remarkable planet – from the amazing acts of natural geological process to the terrible ticking time-bombs of Terra. Prosody (linguistics) There is no agreed number of prosodic variables. In auditory terms, the major variables are the pitch of the voice (varying between low and high)length of sounds (varying between short and long)loudness, or prominence (varying between soft and loud)timbre (quality of sound) in acoustic terms, these correspond reasonably closely to

Evolutionary roots of self control: Study of 13 primate species links 'intertemporal choice' to natural selection A chimpanzee will wait more than two minutes to eat six grapes, but a black lemur would rather eat two grapes now than wait any longer than 15 seconds for a bigger serving. It's an echo of the dilemma human beings face with a long line at a posh restaurant. How long are they willing to wait for the five-star meal? Paralanguage Paralinguistic information, because it is phenomenal, belongs to the external speech signal (Ferdinand de Saussure's parole) but not to the arbitrary conventional code of language (Saussure's langue). The paralinguistic properties of speech play an important role in human communication. There are no utterances or speech signals that lack paralinguistic properties, since speech requires the presence of a voice that can be modulated.

Applied Materials sets cobalt on path to future chips When a global leader in providing equipment, services and software used for manufacturing semiconductors makes an announcement, industry players sit up and listen, as the technologies are going to impact market activity in devices such as smartphones, flat screen TVs and solar panels. Tuesday's announcement from Applied Materials was big. The Santa Clara, California based equipment supplier announced the launch of its Endura Volta CVD Cobalt chip making machine. Get Anyone to Like You - Instantly - Guaranteed Get anyone to like you - Instantly - Guaranteed If you want people to like you, make them feel good about themselves. This golden rule of friendship works every time - guaranteed!

Unidentified Metal Spheres Fall From Sky in China One of eight objects that fell from the sky in northeastern China May 16 and 17, 2014. (Network Screenshot) Metal objects in the form of spheres surrounded by jagged-edged crowns fell from the sky in northeastern China on Friday and Saturday. Altogether, eight of these unidentified objects fell in the city of Qiqihar. State-run media outlets reported that one of the balls was a little over 2 feet in diameter and weighed about 90 pounds.

7 Body Language Tricks To Make Anyone Instantly Like You There’s no question that body language is important. And, according to Leil Lowndes in her book “How To Talk To Anyone,” you can capture — and hold — anyone’s attention without even saying a word. We’ve selected the best body language techniques from the book and shared them below: The Flooding Smile “Don’t flash an immediate smile when you greet someone,” says Lowndes. Diamond Teleporters Herald New Era of Quantum Routing The prospect of a quantum Internet has excited physicists for two decades. A quantum Internet will allow the transmission of information around the world with perfect security and make cloud-based quantum computing a reality. But first, physicists must perfect the technology of quantum routing—the ability to receive and transmit quantum information without destroying it. That’s a significant challenge.

How to Detect Lies - body language, reactions, speech patterns Interesting Info -> Lying Index -> How to Detect Lies Become a Human Lie Detector (Part 1) Warning: sometimes ignorance is bliss. After gaining this knowledge, you may be hurt when it is obvious that someone is lying to you. The following deception detection techniques are used by police, forensic psychologists, security experts and other investigators. The Emerging Science of Superspreaders (And How to Tell If You're One Of Them) Who are the most influential spreaders of information on a network? That’s a question that marketers, bloggers, news services and even governments would like answered. Not least because the answer could provide ways to promote products quickly, to boost the popularity of political parties above their rivals and to seed the rapid spread of news and opinions. So it’s not surprising that network theorists have spent some time thinking about how best to identify these people and to check how the information they receive might spread around a network. Indeed, they’ve found a number of measures that spot so-called superspreaders, people who spread information, ideas or even disease more efficiently than anybody else. But there’s a problem.

Eye of the beholder: Improving the human-robot connection Researchers are programming robots to communicate with people using human-like body language and cues, an important step toward bringing robots into homes. Researchers at the University of British Columbia enlisted the help of a human-friendly robot named Charlie to study the simple task of handing an object to a person. Past research has shown that people have difficulty figuring out when to reach out and take an object from a robot because robots fail to provide appropriate nonverbal cues. Creator of Facial Recognition Tech Now Warns About Its Use What's the Latest? Pioneer of facial recognition technology, Dr. Joseph J. #Strategy : An FBI Agent's 8 Ways to Spot a Liar...23 years in the FBI Taught this Entrepreneur How to Spot Deception When it Counts. - First Sun Consulting, LLC 2. Surprise them. A deceptive person will try to anticipate your questions, so that their answers sound instinctive and natural. They may even practice answering specific questions ahead of time. Ask them something they don't expect, and they'll stumble. 3.