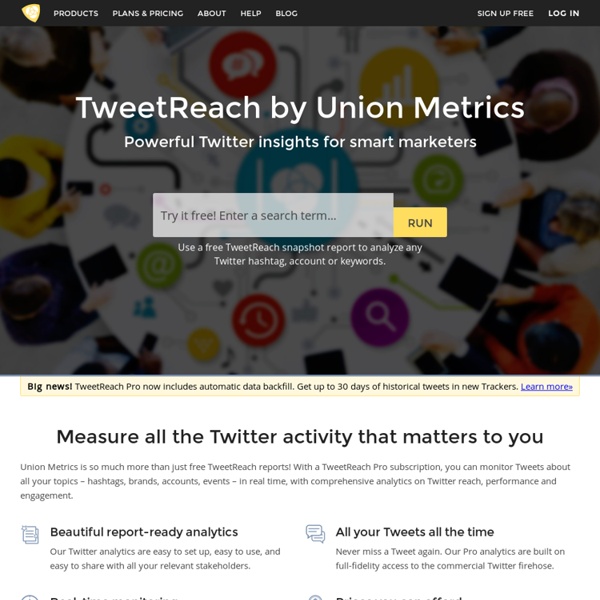 30 Very Useful Twitter Tools You Must Be Aware Of There are numerous ways of using Twitter for everything from business to fun. The key to using Twitter effectively is the use of tools. Without tools, Twitter can be overwhelming and difficult to fathom. There are numerous tools that allow you to sift through this massive resource of latest news, links and gossip. So what are the Twitter tools that really make a difference for advanced Twitter users? I selected just the best of them: 30+ Twitter tools that are most useful right now.

Has Twitter done with mobile ads what Google and Facebook can’t? It’s no secret that mobile advertising is the holy grail that virtually every major digital player is trying to find, but no one seems to have cracked the code just yet. Facebook has admitted that while it has almost half a billion users on mobile devices, it still isn’t sure whether its mobile business is working or not, and Google hasn’t blown anyone away with its results so far either. According to some reports, however, one company that is having some success is Twitter — which now sees a majority of its advertising revenue coming from mobile. Is there something about Twitter that makes it more likely to succeed at mobile advertising than its larger competitors? A million people engaging with an ad in four days

19 Visual Social Media Secrets from the Pros [SlideShare] Is your brand telling visual stories? Are you empowering your fans to create and share visual content for you? Brands who create and curate visual content are seeing wider reach, more shares and traffic to their real or virtual doorstep. We asked 19 Visual Social Media Experts for the secrets behind their success online using visual content… Visual Social Media is hot right now. Twitter's Ranking of the most recommended verified tweeps Search and filter options allowing you to find people to follow depending on location, influence, number of followers, how active users are on Twitter and many more! Find the most beneficial people to target so that you can grow and increase the quality of your Twitter community. Find out your best time to tweet, discover the interests of a custom sample of users and endless extra features! To find out more about our product

21 Amazing Twitter Tools for Brand Visibility and Time Management Managing a busy Twitter stream can be overwhelming, that’s why I needed some help from twitter tools to boost online presence and productivity. But over time, I came across more amazing twitter apps that worth a mention as well. Therefore, I compiled another list dedicated to these wonderful time-saver tools that helped, if not daily, then regularly enough in making full use of the tweets shared and received. Hopefully they could be of some help to you too. Editor Note: I purposely left out Twitter Clients in this post to highlight Twitter web tools instead.

Marketing Automation by Pardot Keep your pipeline fully stocked with a steady flow of high-quality leads using Pardot’s landing pages, form builders, and search connectors. Pardot’s intuitive WYSIWYG interface makes designing and launching landing pages and forms a snap. You no longer need to be an HTML expert to create attractive and engaging landing pages. Optimizing your landing page is also a breeze with automated Multivariate Testing.Create polished forms with real-time field validation and Progressive Profiling designed to increase conversions by never asking for the same information twice.Connect all of your Search Campaigns on one cohesive platform. Manage your campaigns and track your conversions directly from Pardot.

Meet the man who makes six figures a quarter just from using Twitter For anyone who is semi-active on Twitter, the chances are they have been followed, retweeted or received a direct message from someone who calls him or herself a ‘social media guru’. The characteristics are always the same: countless thousands of followers, which almost exactly mirror the number of people the person follows, with plenty of self-promoting keywords and hashtags filling out their profile. Social media gurus (mavens, ninjas, masters) are everywhere you look on Twitter. According to FollowerWonk (via Adage), there are now 181,000 people who use one of these four terms in their Twitter profile.

17 Ways to Visualize the Twitter Universe I just created a new Twitter account, and it got me to thinking about all the data visualization I've seen for Twitter tweets. I felt like I'd seen a lot, and it turns out there are quite a few. Here they are grouped into four categories - network diagrams, maps, analytics, and abstract. Network Diagrams