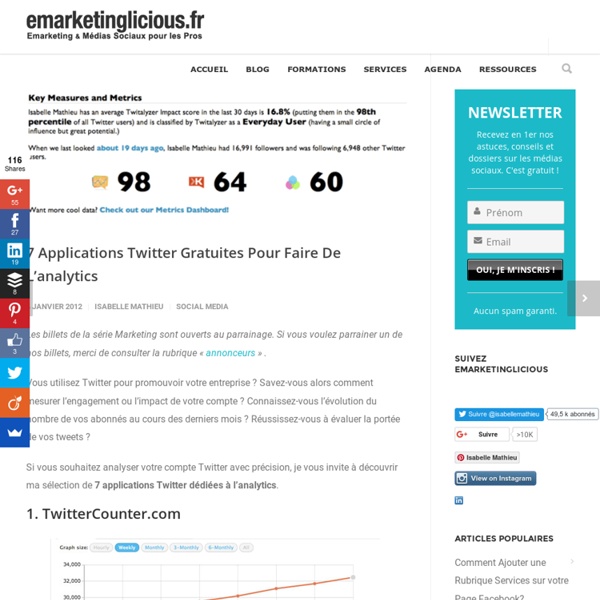 5 Biggest Facebook Timeline Mistakes 1. Ignoring the Cover Photo Guidelines The Cover Photo works as your brand´s personal billboard with a strong visual impact, but only if you use the space wisely. You shouldn´t forget that it´s designed for storytelling, not promoting. Facebook released strict guidelines that ban promotions, coupons and advertisements. Your Cover photo shouldn´t include: price or purchase information (such as 40% off), contact information (such as your web address or email), references to Like or Share buttons (or any arrows pointing to them) and it shouldn´t include any calls to action such as “Get it now” or “Tell your friends”.

Top 10 social media dashboard tools Hootsuite: Among the best of breed. How to manage the torrent of social media conversations — and increase your productivity! By Kim Bale Socialbrite staff One of the things we often hear from nonprofits and social enterprises is: How do I manage the torrent of social media conversations coming at me? Stats: Twitter's relationship with TV revealed There was a huge amount of buzz last year around the inevitable rise of connected TV, which sounded great but rather ignored the fact that viewers were already using their smartphones to interact with what they were watching. New apps like Zeebox have achieved huge success by allowing people to share their TV viewing experience with others, but Twitter and Facebook remain as two of the main ways of talking about TV. To highlight the depth of this link, Twitter has published a new report revealing some of the ways in which consumers use the social network to engage with TV shows. Here are some of the most interesting stats and cases studies, but for more information on this topic checkout our Twitter for Business Best Practice Guide and this blog post on what can we learn from the top five retail brands on Twitter. Key Twitter stats

7 Ways To Convert Your Social Media Followers Into Paying Evangelists A social media profile represents a business’ online identity. Therefore, it’s crucial for businesses to spend time and effort in order to ensure that their social media profiles are informational, interesting and appealing to their fans/ followers. However, building an impressive profile and building a large follower base is only half the battle won. The other and perhaps equally important other half of the battle is to turn your social media followers and friends into paying evangelists.

Fan Growth Slowed Slightly After Brands Switched To Facebook Timeline [STUDY] About six weeks after the first brands began switching their Facebook Pages over to Timeline, some data is beginning to trickle out and it's not all good. Facebook has yet to offer any overall analysis of brand pages before and after the Timeline switchover, but Wildfire Interactive, a social media marketing firm, has studied 67 brands that adopted Timeline and has released those results exclusively to Mashable. The report looked at the brand pages' performance before and after the switch over a nine-week period. First, the good news: Likes are up an average of 22% per post and People Talking About This (PTAT) rose 25%.

Home - YoruFukurou YoruFukurou (NightOwl) YoruFukurou (NightOwl) is a native Twitter client for Mac OS X. Features of YoruFukurou Create Tabs from Rules and Lists Twitter Use 2012 Twitter use Some 15% of online adults use Twitter as of February 2012, and 8% do so on a typical day. Although overall Twitter usage has nearly doubled since the Pew Research Center’s Internet & American Life Project first asked a stand-alone Twitter question in November 2010, the 15% of online adults who use Twitter as of early 2012 is similar to the 13% of such adults who did so in May 2011.

6 Tips for Improving Twitter Link Click Through Rate When it comes to sharing links through Twitter, what makes them click? Dan Zarella from HubSpot set out to answer that question, analyzing over 200,000 link-containing tweets, and measuring several characteristics that appear to influence click through. Dan’s findings are presented infographically (WordPress tells me this is not a word, but I don’t care), which we will here break down tip-by-tip, along with some real-world examples. Here goes… 5 Tips to Maximize Your Brand's Facebook Reach Believe it or not, you can expand your Facebook reach now, in a few simple steps. According to a 2011 comScore report, brands that post an average of five to seven times per week only reach about 16% of the fan base they have worked so hard to establish. While Facebook has never officially divulged exactly how to gain greater reach — though it did release an ad product, Reach Generator — there are several tactics known to work. First, let’s review the EdgeRank trifecta.

The most comprehensive twitter app list you'll ever need Twitter has become a remarkably diverse tool; what used to be text based has evolved into something greater, incorporating multimedia, links and info far beyond what was originally intended thanks to the creativity of programmers and the twitter community. But with so many new apps already available and more being released by the day, trying to discover what useful and what isn't is time consuming. Therefore, we've compiled a list containing over 80 different twitter apps and tools for you to use. Whether you use Twitter for personal or professional purposes, all the apps below will help improve your experience with the micro-blogging site. Ranging from mobile to business to analytics, there will certainly be an app below that you'll find useful. Third-party apps

How Twitter & Texting Saved Writing The way some people talk about Twitter and texting, you'd think that the tools meant the end of literacy as we know it. For example, Google the phrase "Why I Hate Twitter" and you'll get more than 38,000 hits. Here's a typical complaint: Twitter and texting are killing the English language. English is a beautiful and complex language ... but our quick-hit communication culture is turning the language of Shakespeare (as the French call it) into a bunch of random symbols. I couldn't disagree more.

10 Creative Ways to Use Use Instagram for Business Are you thinking about putting your business on Instagram? Are you looking for content ideas for this increasingly popular mobile social platform? Read further to discover how you can use Instagram to give your business extra visibility and better engage with the Instagram community. What Is Instagram? Google SEO resources for beginners Webmaster Level: Beginner Want to eat healthier and exercise more in 2010? That's tough!