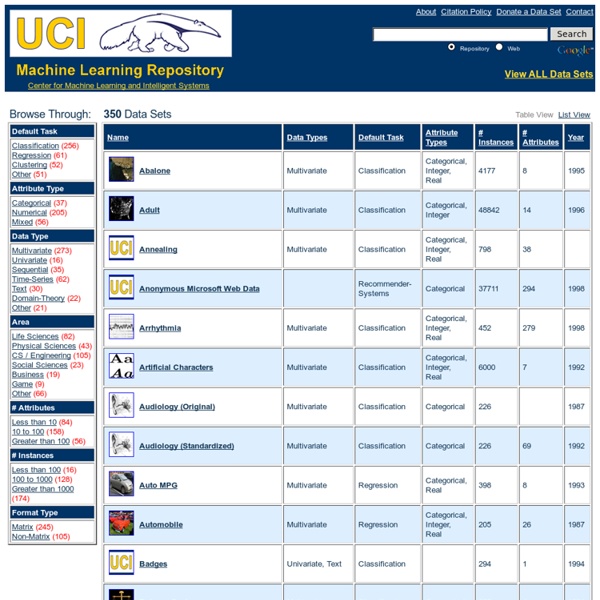 The Journalist-Engineer A couple months ago, I published an article comparing historic and present-day popularity of older music. I used two huge datasets: 50,000 Billboard songs and 1,4M tracks on Spotify. If I were writing an academic paper, I’d do a ton of analysis, regression, and modeling to figure out why certain songs have become more popular over time. Or I could just make some sick visualizations… Fuzzy Computing: Basic Concepts Sample application (sources) - 46KSample application (binaries) - 27K (Note: The application's sources may be obtained also as part of AForge.NET Framework) Introduction: Fuzzy Computing Fuzzy Logic, the core of the Fuzzy Computing, was introduced by professor Lofti A. Zadeh in 1965, as an alternative approach to solve problems when the classical set theory and discrete mathematics, therefore the classical algorithms, are unappropriate or too complex to use. To address a certain class of problems which a human being can solve easly, an approach that do not relies on mathematical rigor and precision, but an approach fault tolerant that can handle partial truths.

Open-source, distributed deep learning for the JVM Deeplearning4j is not the first open-source deep-learning project, but it is distinguished from its predecessors in both programming language and intent. DL4J is a JVM-based, industry-focused, commercially supported, distributed deep-learning framework intended to solve problems involving massive amounts of data in a reasonable amount of time. It integrates with Hadoop and Spark using an arbitrary number of GPUs or CPUs, and it has a number you can call if anything breaks. Get Started With Deeplearning4j Content

What is the Marital Status of Americans by Age? Visualization Data Notes A few months ago I created a visualization that allowed users to compare age distributions for various topics and another one that showed marital status by age range. Fuzzy Framework Introduction In the following article, we briefly introduce Fuzzy Framework library which supports calculations based on fuzzy logic in .NET. In past, there have been a couple of similar projects like the one described in [3], but no one matched exactly my requirements: Technical Analysis: Chart Patterns By Cory Janssen, Chad Langager and Casey Murphy A chart pattern is a distinct formation on a stock chart that creates a trading signal, or a sign of future price movements. Chartists use these patterns to identify current trends and trend reversals and to trigger buy and sell signals. In the first section of this tutorial, we talked about the three assumptions of technical analysis, the third of which was that in technical analysis, history repeats itself. The theory behind chart patters is based on this assumption. The idea is that certain patterns are seen many times, and that these patterns signal a certain high probability move in a stock.

how fast does miles teller play in whiplash EDIT 05 Sep. 2015: The concept of Beat Per Minutes (BPM) has been mis-understood as mentioned by reddit. What I was supposed to write was Strokes Per Minutes (SPM). Released in 2014, Whiplash focuses on a promising young drummer (Miles Teller) pursuing his dream of greatness. Framework AForge.NET is an open source C# framework designed for developers and researchers in the fields of Computer Vision and Artificial Intelligence - image processing, neural networks, genetic algorithms, fuzzy logic, machine learning, robotics, etc. The framework is comprised by the set of libraries and sample applications, which demonstrate their features: AForge.Imaging - library with image processing routines and filters;AForge.Vision - computer vision library;AForge.Video - set of libraries for video processing;AForge.Neuro - neural networks computation library;AForge.Genetic - evolution programming library;AForge.Fuzzy - fuzzy computations library;AForge.Robotics - library providing support of some robotics kits;AForge.MachineLearning - machine learning library;etc. The work on the framework's improvement is in constants progress, what means that new feature and namespaces are coming constantly.

Implementing a Neural Network from Scratch in Python – An Introduction – WildML Get the code: To follow along, all the code is also available as an iPython notebook on Github. In this post we will implement a simple 3-layer neural network from scratch. We won’t derive all the math that’s required, but I will try to give an intuitive explanation of what we are doing. I will also point to resources for you read up on the details.

What You Like Falls on Party Lines Far and away, the Republican group is more country, while fans of Mrs. Clinton are more pop. At the top of the list for people who like Mrs. Welcome — Theano 0.8.2 documentation Theano is a Python library that allows you to define, optimize, and evaluate mathematical expressions involving multi-dimensional arrays efficiently. Theano features: tight integration with NumPy – Use numpy.ndarray in Theano-compiled functions.transparent use of a GPU – Perform data-intensive computations much faster than on a CPU.efficient symbolic differentiation – Theano does your derivatives for functions with one or many inputs.speed and stability optimizations – Get the right answer for log(1+x) even when x is really tiny.dynamic C code generation – Evaluate expressions faster.extensive unit-testing and self-verification – Detect and diagnose many types of errors. Theano has been powering large-scale computationally intensive scientific investigations since 2007.