How To Mix Chalkboard Paint in Any Color 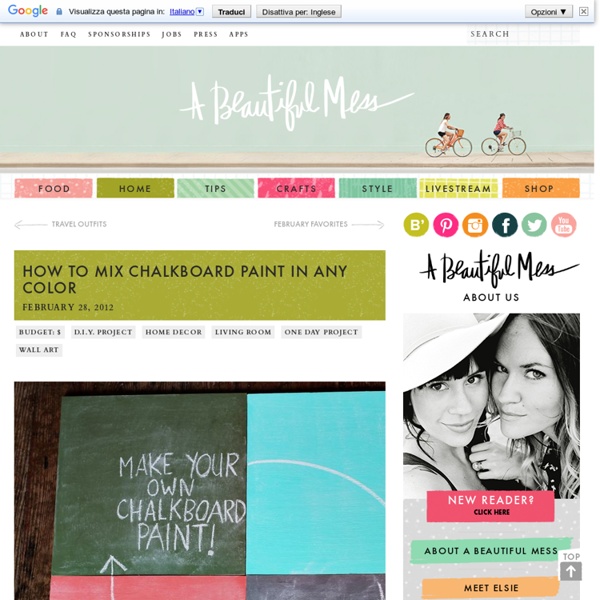 We love using chalkboards as backdrops for displays and parties (like this one here!). So we were super excited to learn that you can create your own custom colors-and it's really easy! We first learned how from Martha Stewart whose tutorial you can read here. She recommends that you use latex paint, but we tried it out with acrylic paints with much success. Here's how you too can create your own chalkboard paint... Supplies: 1/2 cup acrylic paint (choose any color you like, or mix colors together to make the perfect shade!) 1. 2. Once your chalkboard has fully dried be sure to slate the surface before using it for the first time. Have fun creating any color combination you like!!

Related:  Aesthetic • To Do

New Watercolor Tattooers of 2014 Consider the time that goes into crafting a beautiful painting on canvas. Then consider doing it all over again, this time with an electric rotary on the elastic and unpredictable surface that is the human body. No mistakes allowed. Watercolor tattoos were trendy back in ‘12, with pioneers like Ondrash, Klaim and Wachob. Their body art experiments inspired others to explore, giving way to modern masters in this fresh and unique style. Top: Chambered nautilus ejecting origami turtles by Jay Freestyle.

The Diving Bell and the Butterfly The Diving Bell and the Butterfly (original French title: Le Scaphandre et le Papillon) is a memoir by journalist Jean-Dominique Bauby. It describes what his life is like after suffering a massive stroke that left him with locked-in syndrome. It also details what his life was like before the stroke. The French edition of the book was published on 6 March 1997. It received excellent reviews, sold the first 25,000 copies on the day of publication, reaching 150,000 in a week.

Make a scrying mirror. Now here's a very odd but simple project that doesn't involve electronics at all, but has a very delicious element of darkness to it in more ways than one. It's a scrying mirror. Basically a black mirror used to focus (or defocus) the mind to perceive images often perceived as spiritual. Have you ever laid in a dark room and gradually seen random images like people or portals into other places?

Friendship Bracelets Macraméd friendship bracelets were all the rage when I was growing up in the eighties. All the girls at my school would obsessively make them for one another in a dizzying variety of colors, widths, and patterns. It's amazing, thinking back, that such young girls could make such beautifully intricate accessories. I, of course, tried my hand at making them as well. Kitchen Craft: Soap Clouds! {And homemade kiddie tub soaps} You know what question Kate and I get a lot? “How do you girls do it it all??” Our schedules are full, just as many of yours are, and it comes with the constant struggle of balancing Mom-life with work-life. And like most other Mothers out there, when it comes down to it and one has to take priority, the Mom gig wins- no contest. If something has to fall through the cracks it’s not Mom thing; it’s usually the doing-laundry, cleaning-bathrooms, or showering-before-noon thing. So to answer the question, how do we do it all?

How to Upcycle Old Magazines Into Wall Art So we’ve already shown you how to repurpose your old stacks of magazines, but in case none of those tickled your fancy we’ve got one more DIY for you. DIY silhouette wall art! Ta dah! This DIY Basic is super simple. In just five easy steps you can create wall art that is fun, original, and packed with color. Materials: – magazines – canvas/wood/board – hot glue sticks – pattern – tape Lake Retba Lake Retba or Lac Rose (meaning Pink lake) lies north of the Cap Vert peninsula of Senegal, north east of Dakar.,[1] in northwest Africa. It is so named for its pink waters, caused by Dunaliella salina algae in the water that produce a red pigment used to absorb light, which provides energy to create ATP, turning the waters pink.[2] The color is particularly visible during the dry season. The lake is also known for its high salt content, which, like that of the Dead Sea, allows people to float easily.[1] The lake also has a small salt collecting industry and was often the finishing point of the Dakar Rally, before it moved to South America in 2009.[3] Lake Retba is under consideration by the World Heritage Committee for inclusion as a World Heritage Site.[6] See Also[edit] Lake Hillier

Home Decorating - Design And Ideas If you enjoy in good wine and you didn’t trow away the old corks you can create interesting home gadgets that are both interesting and creative. Home decorating can be improved using one of the 25 home ideas with corks we presented here. You don’t need to spend money for your home, you can easily recycle and reuse the old corks for coasters, maths and much more. Stamps Thread Spool Corks Wreath TetraBox Light by Ed Chew Liquid to Light Designer Ed Chew takes a green step in the right direction with the TetraBox lamp, a light object made from discarded drink packets that would have otherwise ended up in landfills already packed to the brim. The design is achieved by unfolding the packets and refolding them into hexagonal and pentagonal sections that are then pieced together to form a geodesic sphere or any other desired shape.

that's what I thought when I found this too. glad you folks liked it. :) by fyrestarre Apr 10

I was thinking that! We could do some cool stuff with this. :) by b3ll4trix Apr 9