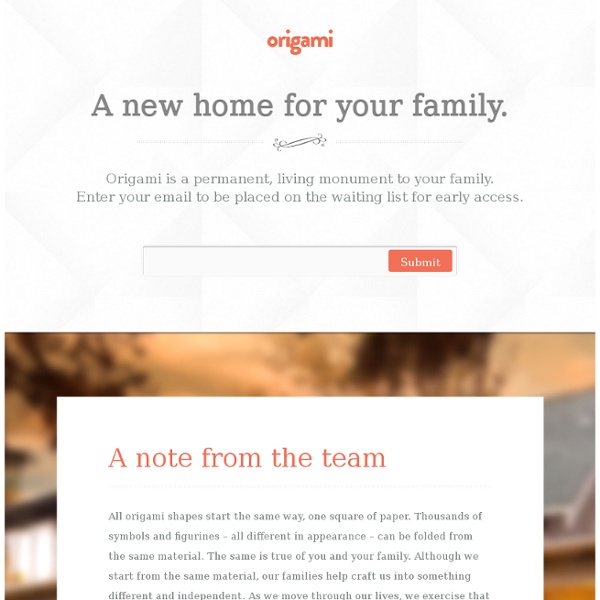 A new home for your family. Origami is a permanent, living monument to your family. Enter your email to be placed on the waiting list for early access. All origami shapes start the same way, one square of paper. Thousands of symbols and figurines – all different in appearance – can be folded from the same material. The same is true of you and your family.

KCP International The seaside has always had an allure for people with its rolling waves, sandy beaches, and countless interesting creatures. Many origami creators have been inspired to make designs that are reminiscent of the sea and its inhabitants. Here are three sea-inspired origami designs that are cute and easy to make: DIY Mini Photo Studio Our household is spawning blogs like bunnies. Since I need all the help I could get, I thought it would be good to up my photo game. We’ve been using a bay window to take some of our pictures. FREE EASY ORIGAMI FLOWERS « EMBROIDERY & ORIGAMI Origami Money Flowers: Origami Money Flowers | Simple Design Learn how to make free simple origami money flowers from US dollar bill or any other currency that you have. Currently providing step by step origami Easy Origami Folding Instructions : How to Make an Origami Flower Easy paper folding instructions on how to make an origami flower in this free how-to video clip lesson.

Adding a '3D print' button to animation software Public release date: 31-Jul-2012 [ Print | E-mail Share ] [ Close Window ] Contact: Caroline Perrycperry@seas.harvard.edu 617-496-1351Harvard University Cambridge, Mass. - July 31, 2012 - Watch out, Barbie: omnivorous beasts are assembling in a 3D printer near you. robert lang - origami Background In 1989, I wrote an article for the magazine Engineering & Science about the state of technical folding, which, even then, seemed to be progressing by leaps and bounds due to an infusion of scientific and mathematical principles. In recounting some of the connections between origami, math, and technology, I wrote: Computing succumbed to the appeal of folded paper when, in 1971, Arthur Appel programmed an IBM System 360 computer to print out simple geometric configurations at the rate of more than one hundred a minute. Ninety percent were considered unsuccessful, but it raises an interesting question: could a computer someday design a model deemed superior to that designed by man?

Wheelchairs From Old Bike Parts By Gregory Hayes Photo by Bob Geile In developing countries — where roads look like off-road, sidewalks are as rare as wheelchairs, and nothing’s as rare as cash — a mobility issue can create a major drain on a family’s already sparse resources. That’s why Randy Geile designs inexpensive wheelchairs using readily available parts. The price of a stock off-road wheelchair starts at a couple grand and skyrockets quickly. Robert J. Lang Flight of Folds: Monument Modern origami is a unique sculptural art. Each origami design must be individually folded; there is no mass-production process.

Secret Doors, Drawers & Compartments To make all of these Instructables, download this collection of How To’s as an ebook. Download » Bruce Wayne hid the entrance to the Batcave behind a bookcase, operated by a button hidden in a bust of Shakespeare. Ever wanted to make your own? origami - Software This software is a design software that allows users to interact with origami forms while altering the crease pattern of the model. The software can keep: Developability (foldable from a piece of paper) Flat-foldability (foldable into a flat shape) Planarity of facets (paper do not twist in 3D form) Point coordinate coincidence Paper size Binary for win32FreeformOrigami025.zip (ver 0.2.5) For questions and discussions, please use this place History 2014/1/23 ver 0.2.5 Alpha Added global developability and flat-foldability for a mesh with hole (it may be still buggy). Fixed bugs in the crease pattern editing. 2013/11/20 ver 0.2.4 Alpha fixed bugs in the Add Ref Pts.