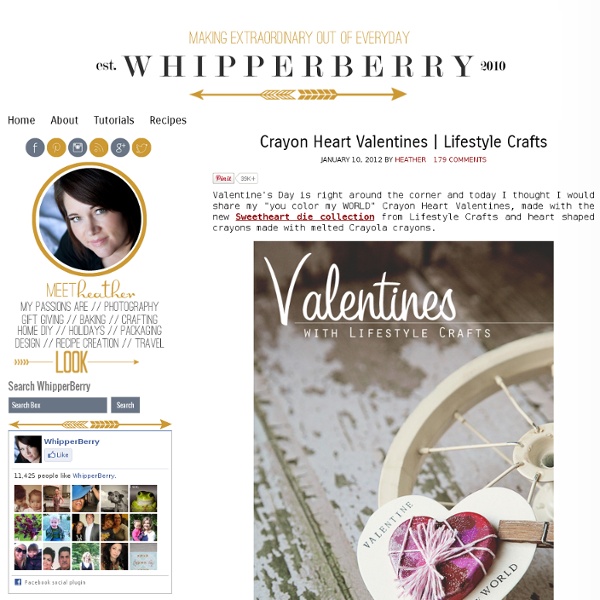 oh my! handmade goodness - StumbleUpon by Michelle Vackar, Modern Handmade Child One of our favorite outside activities at our home is drawing with chalk on the driveway. You can play hopscotch, four-square, and of course draw and create silly stories. My daughters and I were talking one day as we played hopscotch about how to make chalk and I thought to myself, let’s try it! It ended up being quite a lot of fun. What you will need: • Toilet paper or paper towel tubes • Scissors • Duct tape • Wax paper • Small bucket or disposable container to make the recipe • ¾ cup of warm water • 1 ½ cups Plaster of Paris • 2-3 tablespoons of tempera paint • Paper bag or a “mess mat”

Women of All Red Nations The best-known Native American women's organization of the 1970s was Women of All Red Nations (WARN). WARN was initiated in 1978 by women, many of whom were also members of the American Indian Movement which was founded in 1968 by Dennis Banks, George Mitchell, and Mary Jane Wilson, an Anishinabe activist. (12) WARN's activism included fighting sterilization in public health service hospitals, suing the U.S. government for attempts to sell Pine Ridge water in South Dakota to corporations, and networking with indigenous people in Guatemala and Nicaragua. (13) WARN reflected a whole generation of Native American women activists who had been leaders in the takeover of Wounded Knee in South Dakota in 1973, on the Pine Ridge reservation (1973-76), and elsewhere. WARN, like Asian Sisters and Hijas de Cuauhtemoc, grew out of--and often worked with--mixed-gender nationalist organizations.1 Check out their website:

Confetti Egg Game Apr 18 This post is by my friend Rebecca Wright who will now be doing a column on Oh Happy Day. She throws some of my favorite parties I’ve ever been to like: her bicycle wedding, her bus birthday party, and her film festival birthday party. I’m so happy to have her here. I love parties that involve surprises. And crowd participation. 10 Anime Series To Watch! // Also available in French With a huge amount of anime series produced each year in Japan, it’s easy to be lost! You’re wondering what you should watch, this list will help you out: Tutorials for Recycling Books - StumbleUpon We rode bikes around our neighborhood this weekend and stopped at all the garage sales we found along the way. I love doing this because it's like exercise and shopping in one! Plus, my bike basket is perfect for holding whatever treasures I find. On this particular trip I was noticing a lot of old books for sale. My DIY craving kicked in and I knew I had to do some research on the projects I could use old books for.

PLUS Model Magazine's Katya Zharkova cover highlights body image in the fashion industry By Tamara Abraham Updated: 12:08 GMT, 12 January 2012 A magazine dedicated to plus-size fashion and models has sparked controversy with a feature claiming that most runway models meet the Body Mass Index criteria for anorexia. Accompanied by a bold shoot that sees a nude plus-size model posing alongside a skinny 'straight-size' model, PLUS Model Magazine says it aims to encourage plus-size consumers to pressure retailers to better cater to them, and stop promoting a skinny ideal. Confetti Invitations Mar 14 I made this prototype for a couple who needed save-the-dates for a wedding. We ended up doing something else but these turned out so cute I thought I would do a tutorial on how to make them. These little tubes shoot a little burst of confetti when you twist them. The problem is they are usually ugly and the confetti inside them is usually poor quality (like five little sad strands.) So what we did here is strip the label, disassemble the spring mechanism.

The Dalai Lama’s 18 Rules For Living May 6, 2011 | 42 Comments » | Topics: Life, List At the start of the new millennium the Dalai Lama apparently issued eighteen rules for living. Since word travels slowly in the digital age these have only just reached me. Booze it Up! 13 Rad Recycled Bottle Crafts & Projects Got a recycling bin full of glass bottles? Why waste them when you could have a new table lamp, candle holder, shelving unit, hummingbird feeder, glass countertop, building block – even a whole glass-bottle house? Reuse beer, wine and liquor bottles for these 13 fun and creative crafts and upcycling projects ranging up to a recycled bottle home and garden. Wine Bottle Table Lamp (images via: wit and whistle)

Smart tips to make life easier Posted on February 24, 2012 in Humor If you’re new here, you may want to subscribe to our RSS feed or follow us on Facebook or Twitter . Thanks for visiting! Rate this Post (16 votes, average: 5.00 out of 5) Loading... DIY Wrap Bracelet You should all know by now that we are all about stacking bracelets on our wrists. The more, the better. In fact . . . the most, the best! With that being said, we’ll show you how to master a version of the ever so popular wrap bracelet. It’s so simple and addicting, you’ll soon be churning out these wristlets with your eyes closed. Clearly this arm party train isn’t stopping and it’s about time you get on board!

31 Awesome Examples Of Long Exposure Photography December 22, 2011 | 5 Comments » | Topics: Photography, Pics via Cretique Hot Stories From Around The Web Other Awesome Stories DIY: Blueprint-Inspired Holiday Project Our own Angelica completed a DIY project over the holidays that's positively brilliant. She writes: After a series of failed baking adventures I realized it was time for me to transfer my love for YumSugar and food magazines to CasaSugar and design magazines. In the spirit of the holidays I picked a Light Bright project from this month's Blueprint magazine. I must admit, I'm a much better painter and craftswoman than I am a baker so the project was definitely a confidence booster. The Blueprint picture is on the left, my replica is on the right.

DIY Party Animal Candles Hi there, it’s Jenny from Hank + Hunt with a fun and super easy diy today! As soon as I thought of making these I got a huge kick out of naming them Party Animals. Hilarious, but if you hear groaning…it’s coming from my house. Regardless of how cheesy the name is, these turn out awesome.