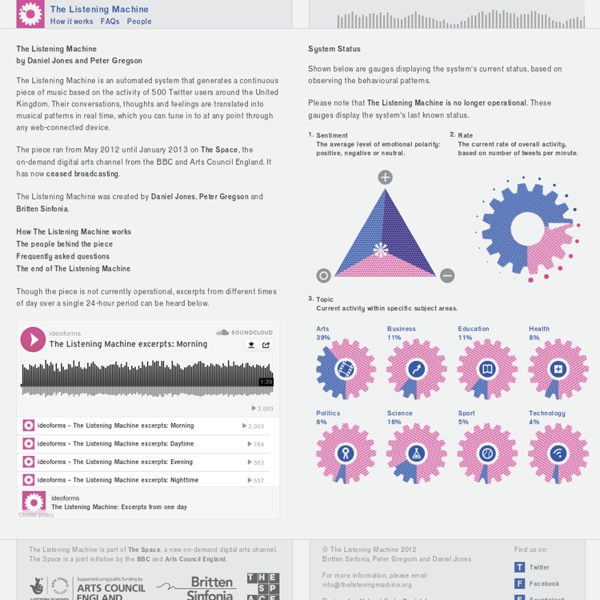 Nature Sounds Adventures in 3D Sound! Edgar Choueiri knows how things work; he’s a rocket scientist — officially, the Director of Princeton University's Electric Propulsion and Plasma Dynamics Laboratory. If NASA ever sends a person to Mars, Choueiri’s research probably will have played a role. But Kurt Andersen visited his lab recently to get a taste of the future right now. Unlike surround sound and other elaborate hardwiring, his breakthrough consists of a software algorithm applied to sound files that allows stereo playback to sound much more real and lifelike. The 3D audio in the show segment above is calibrated for stereo speakers only so it won't work on headphones. Try out the clips below, in which Choueiri demonstrates the sound of water in 3D. 3D Audio Demonstration for Speakers 3D Audio Demonstration for Headphones So how does it work? Drawing on some of the math in plasma physics, Choueiri devised a digital algorithm that cancels crosstalk transparently without changing the tonal quality of the sound.

Choosing a Mixer for Your Home Studio Page 1 2 3 4 by Tweak Tweak: This is the back of a Mackie 1604VLZ3 a known favorite in many home studios. Understanding the back of your potential mixer is more important than the front. By the end of this article you will know what all those ins and outs do. On the next four pages we will cover a lot of mixers and approaches to building your studio. Understanding mixers is important. What does a Mixer actually do? A mixer or mixing console or mixing board all refer to the same thing: a device that allows you to balance, position, effect and equalize its different audio channels into a good sounding sonic image that we call a mix. Those starting a studio need to decide early on what is going to be the center of the studio. Making this choice is one of the most difficult for the home and project studio, as no piece of gear has as many ramifications for the future path of your studio. Going Mixerless Is a mixer even necessary for your rig? Even many professionals are mixerless now.

Synth Secrets, Part 5: Further With Filters Gordon Reid continues his series on the theory of subtractive synthesis by delving deeper into the amazingly complex world of the analogue audio filter. This is the fifth article in a 63-part series. Read all parts. Last month, we started looking at audio filters, demonstrating (if not proving) that they are also phase-shifters, and therefore mess with your audio signals in more ways than one. Passive Filters Figure 1 shows the passive low-pass RC filter first introduced last month (incidentally, you can, with a fair degree of accuracy, define a passive component as one that draws no power except that presented as the signal at its input -- so resistors, capacitors and inductors are examples of passive components, while transistors and other amplifiers are not). But, since we discussed the phase-shifting aspect last month, we're only going to consider the amplitude response this month. Unfortunately (and despite its ubiquitous use within the music industry) Figure 2 is actually wrong.