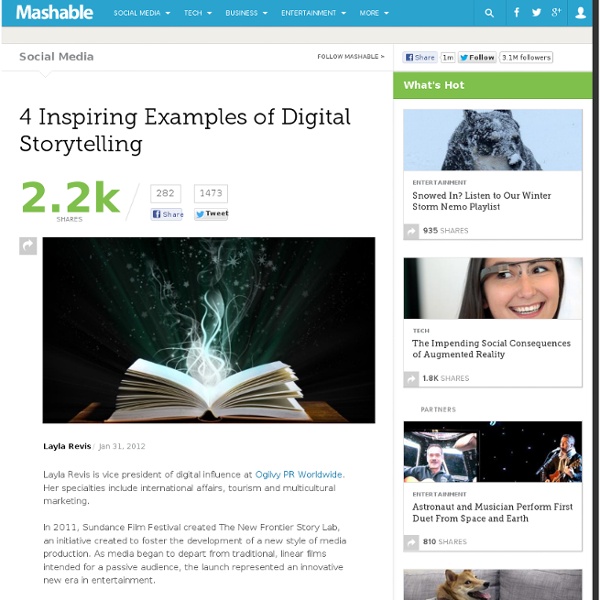 Layla Revis is vice president of digital influence at Ogilvy PR Worldwide. Her specialties include international affairs, tourism and multicultural marketing. In 2011, Sundance Film Festival created The New Frontier Story Lab, an initiative created to foster the development of a new style of media production. As media began to depart from traditional, linear films intended for a passive audience, the launch represented an innovative new era in entertainment. The New Frontier Story Lab helped many an interactive narrative come to life. President of the National Film Board of Canada, Tom Perlmutter's multi-platform interactive productions have also been revolutionizing transmedia. At the intersection of films, games and the Internet, today's creators are using multiple platforms, where the audience can actively reshape the stories themselves. 1. 2. The experience imagines that a mysterious virus has begun to afflict adults in a rural town. 3. 4. Image courtesy of iStockphoto, shevvers

Information Graphics :: E-learning & Multimedia Journalism Examples The Fundamental Elements of Design The Fundamental Elements of Design View the animated infographic View the interactive example → Take Google Maps Indoors Take Google Maps Indoors Lost indoors? Take Google Maps on your Android phone to select airports, malls, and retail stores to get floor layouts and […] View the interactive example → Batteries Included Batteries Included View the infographic View the interactive example → url?sa=t&rct=j&q=storytelling&source=web&cd=3&ved=0CEoQFjAC&url=http%3A%2F%2Fwww.storynet THE FOUR INTRINSIC REWARDS THAT DRIVE EMPLOYEE ENGAGEMENT Motivational dynamics have changed dramatically to reflect new work requirements and changed worker expectations. One of the biggest changes has been the rise in importance of psychic, or intrinsic rewards, and the decline of material or extrinsic rewards. This author draws upon recent research to explain the popularity of intrinsic rewards and how these rewards can be used to build a high-engagement culture. I have been researching workplace motivation for about 30 years and I’m amazed at how much has changed recently. Automation and off-shoring have eliminated most of the highly repetitive jobs in the U.S., while global competition has produced flatter, more responsive organizations that require employees to use judgment and initiative to a much greater extent. Most of the motivational models used today were developed in earlier eras, when work and workers were different. Extrinsic and intrinsic rewards Extrinsic rewards remain significant for workers, of course. 1. 2. 3. 4. 5. 6. 7.

Learning the Corporate Culture Learning the Corporate Culture Contents: Back to Career Contents Page To use a simple analogy, fitting into a company's corporate culture is like buying a new pair of shoes. You want shoes that provide comfort, match your personal style, and last long enough to get you where you want to go. The same holds true when shopping for a career and, ultimately, a place of employment. Back to Culture Contents Every workplace has a culture, and no two are ever alike. Individually and collectively, these factors will likely determine if a company is right for you, or if you are right for the company. As you'll no doubt discover, corporate cultures evolve over time, and workplace environments often change, sometimes significantly, whenever a new executive takes the helm. Simply stated, there's no getting around it. In short, those who succeed are able to adapt to the company's ways. A word about mentorship: Checklist Contents: 1. Back to Career Contents Page #1: Company Standards: 1. 2. 3. 4. 5. 6. 7. 8.

Exclusive: Trent Reznor on "The Social Network" [INTERVIEW] Back when it was first announced that rocker Trent Reznor would be scoring David Fincher's The Social Network, we thought it was a match made in pop culture heaven — a movie about the dark side of the social networking biz, scored by a man who has plumbed the depths of social media, while also wrestling with its implications? Sign us up. Well, we got an aural glimpse at the soundtrack the other week after Reznor, along with his record company, The Null Corporation, and Sony’s Madison Gate Records announced the disc on Null Co's website and gave fans a five-song sneak peek. Now we're itching to see how music and celluloid go together. As the premiere of the highly anticipated film rapidly approaches, we decided to talk with Reznor about the experience of scoring a movie in its entirety, the state of the music industry, and, of course, social media on the whole. It's not about how the kid in the dorm room that likes to listen to music. So that felt to me that it was worth doing.

Negotiation Training Course Modules - Training role plays, games, exercises and activities. I joined a little over one month ago and recently used the team building exercise Island of Opportunity at a senior managers three day transformative conflict/mediation workshop. I chose this activity as an evening event on Day 2 because the exercise allowed for team building, some fun and laughter after two days of role-playing conflict scenarios, and it also contained key learnings for trainee mediators. Specifically the exercise- - was aligned with the general workshop content (negotiation, understanding of needs and collaboration to reach a solution Vs aggression and conflict provoking tactics). - allowed for team building as some participants did not know one another but worked in the same unit. - provided light relief after 2 full days of discussing conflict which produces low energy in the group. - can be used to discuss cultural aspects of teams/organisations and how they might deal with differences/disputes.

3-D Negotiation: Playing the Whole Game The Idea in Brief Why didn’t those last deals work out the way you expected? You brilliantly followed all the rules in negotiation manuals: You built enormous goodwill. You demonstrated astute cultural sensitivity. Like most of us, you may have waited too long to start negotiating. That’s why savvy 3-D negotiators work behind the scenes, away from the table, both before and during negotiations to set (and reset) the bargaining table. 3-D moves help you engineer deals that would otherwise be out of tactical reach. The Idea in Practice In addition to skillfully handling tactical and substantive challenges, consider these guidelines to 3-D negotiation: Scan Widely Search beyond the existing deal on the table to find complementary capabilities and value that other players might add. This process will identify all the actual and potential parties and crucial relationships among them, such as who influences whom, who defers to whom, who owes what to whom. Example: Map Backward and Sequence

What's Your Negotiation Strategy? Successful businesses have a strategy in place for virtually everything they do. They spend huge amounts of resources creating, developing, and fine-tuning a marketing strategy, a product strategy, an HR strategy, a communication strategy, and a R&D strategy. Can you imagine Apple or Toyota operating without defining these strategies or setting a budget? It’s almost unthinkable. Nevertheless, in all the times I’ve asked, “How many people have a negotiation strategy?” In studies of over 25,000 negotiators, my firm, MarketWatch Centre for Negotiation, found that negotiators typically lose up to 42% of the total potential value of a transaction. Negotiating A Bigger Piece of the Pie How should we negotiate? At MarketWatch Centre for Negotiation, one of the tools we use to create a cooperative climate is our Negotiation Code of Conduct. Preparation is the other key component of a successful negotiation strategy. Take the case of a construction company and a drywall manufacturer.

Design Thinking: Lessons for the Classroom The Design Thinking Process While design thinking has its roots in the innovation/design sector, the process itself can be used anywhere. Indeed, it is a great tool for teaching 21st century skills, as participants must solve problems by finding and sorting through information, collaborating with others, and iterating their solutions based on real world, authentic experience and feedback. I had the good fortune to participate in a collaborative workshop at the Big Ideas Fest, where we practiced design thinking with about 12 other educators over a three-day period. Practitioners of design thinking have different steps depending on their needs. 1) Identify Opportunity 2) Design 3) Prototype 4) Get Feedback 5) Scale and Spread 6) Present In design thinking, you work through the steps together in small groups (or "Collabs" as they were called at BIF2011). With driving question in hand, each Collab is led by a trained facilitator. This right here is another novel idea! Step 4: Feedback

Crowdsourcing your organization strategy, what’s to appreciate? | Toby Elwin Every instrument has a role greater than just a part of the whole. Crowdsourcing relies on people to participate in a meaningful process as potential partners. In crowdsourcing people who were formally known as the customer now become the collaborator. The power of collective collaboration can not only drive product innovation, but leveraged for decades to build organization strategy. Where most organization strategic plan process finds more in common with Moses’ descent from the mountain, crowdsourcing, itself, is an open call; and an open call to, an often-undefined group. Crowding Around Change Crowdsourcing for a solution is the antithesis of the bureaucratic, and often autocratic, strategic planning performed by chosen few, behind closed doors, and finally unleashed unto the masses. Crowdsourcing has a strong sociological theme and shares this vital link with a vibrant change approach known as Appreciative Inquiry (AI). Appreciative Inquiry is Crowd Sourcing Crowding Around Opportunity