If— by Rudyard Kipling 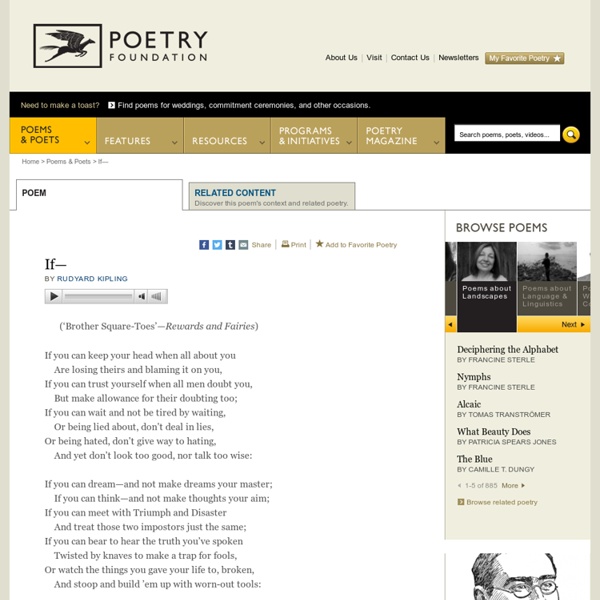 Grass by Carl Sandburg Pile the bodies high at Austerlitz and Waterloo. Shovel them under and let me work— I am the grass; I cover all. And pile them high at Gettysburg And pile them high at Ypres and Verdun. Shovel them under and let me work. Two years, ten years, and passengers ask the conductor: What place is this? Where are we now? I am the grass. Let me work. Source: Cornhuskers (1918) Biography "Trying to write briefly about Carl Sandburg," said a friend of the poet, "is like trying to picture the Grand Canyon in one black and white snapshot." Sandburg composed his poetry primarily in . . . Continue reading this biography Tarot Card Reading Looking for insight into a particular question or issue in your life? Tarot cards can help to explain your current situation and anticipate future events. Get your free Tarot Card Reading below. No one truly knows how old the practice of reading tarot cards is or where they originated. Their mystery is very old and their allure is still great. Tarot cards are split into two groups: The Major Arcana and the Minor Arcana.

5 Timeless Books of Insight on Fear and the Creative Process by Maria Popova From Monet to Tiger Woods, or why creating rituals and breaking routines don’t have to be conflicting notions. “Creativity is like chasing chickens,” Christoph Niemann once said. Despite our best-argued cases for incremental innovation and creativity via hard work, the myth of the genius and the muse perseveres in how we think about great artists. In the ideal — that is to say, real — artist, fears not only continue to exist, they exist side by side with the desires that complement them, perhaps drive them, certainly feed them. Steven Pressfield is a prolific champion of the creative process, with all its trials and tribulations. Are you paralyzed with fear? There’s hardly a creative bibliophile who hasn’t read, or at least heard of, Twyla Tharp’s The Creative Habit: Learn It and Use It for Life. There’s nothing wrong with fear; the only mistake is to let it stop you in your tracks.” Athletes know the power of triggering a ritual. Donating = Loving Share on Tumblr

1386958356-get-done-35-habits-most-productive-people-infographic Моята Поръчка Pick up details Show detailed pickup info Sofia International Airport, Bulgaria Airport Monday March 17 2014 at 23:00 Instructions:Terminal 2Desk in arrivals Hall Saturday March 22 2014 at 13:30 Credit card payment The prepaid car rental amount of $ 54.09 will be charged under the name of BookingGroup Riga LVA. Driver details Changing your Country is only allowed from the Search form Phone number should start with + or 0 Secure payment Total prepaid: $ 54.09 Creditcard expiry date: Books [Updated: June 21, 2008] The following are books which have made the most impact on my life. I’m finding myself repeatedly recommending these to people. Here they are in one place so you too could reference them. Want to change your life situation? It’s simple. Creativity Clarity The Power of Now – Eckhart Tolle (This book shifted my thinking and changed my life. Happiness Flow: Psychology of Optimal Experience (Psychology of happiness)Are You Ready to Succeed? Productivity Seven Habits of Highly Effective People (classic on being more effective)The 4-Hour Workweek (alternative concepts from traditional thinking: Lifestyle design. User Experience: Marketing, Selling & Business: E-Myth: Why Most Small Businesses Don’t Work and What to Do About It (Highly recommended for anyone thinking about or is starting a businesses. Click here to see my current Reading List See my Bookstore.

Books to Brighten Your New Year That time slot after the local news doesn’t matter. As Kimmel, Fallon, and Colbert will soon show, Late Night’s all about YouTube, Twitter, and engaging with audiences on the Internet. In a deleted scene from Pulp Fiction, Mia Wallace tells Vincent Vega her theory that the world is made up of only two kinds of people: Beatles people and Elvis people. “Now Beatles people can like Elvis, and Elvis people can like the Beatles, but no one likes them both equally,” she explains. “Somewhere you have to make a choice. For decades, the late-night talk show landscape operated in much the same way. But with Leno gone and Letterman announcing his retirement, those distinctions are no more. In 1992, your late-night options were Letterman and Leno, period. When Letterman lost the Tonight Show job to Leno in 1991 (Leno took over for Johnny Carson a year later), one mark against him had been concern over whether Letterman’s puckish routine could translate to a “traditional” 11:30 audience.