2045: A New Era for Humanity. World War III could ruin Mars mission: Musk. 29 Signs You’re Doing Just Fine (Even If It Doesn’t Feel Like It) Email Happiness is not the absence of problems, but the ability to keep things in perspective and deal with them. 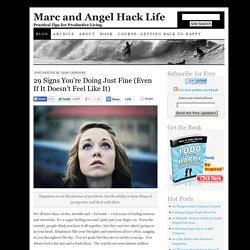 We all have days, weeks, months and – for some – even years of feeling anxious and uncertain. It’s a vague feeling you can’t quite put your finger on. From the outside, people think you have it all together, but they can’t see what’s going on in your head. Emptiness fills your thoughts and emotions all too often, nagging at you throughout the day. And a question continues to spin in your mind: “Why can’t I just be happy?” The good news is you don’t have to live like this. Angel and I often tell our Getting Back to Happy course members they’re doing so much better than they give themselves credit for. Rather than dwelling on what’s missing in your life, start looking at what you have. Having trouble seeing the goodness? Tfkempo added the same item as you to his/her collection: tfkempo - swansen03 - Gmail. Is the Universe a 2D Hologram? Experiment Aims to Find Out.

An ongoing experiment could reveal whether or not our full and fleshed-out 3D universe is an illusion, a 2D projection onto a cosmic screen beyond our perception or understanding. 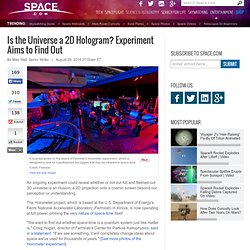 The Holometer project, which is based at the U.S. Department of Energy's Fermi National Accelerator Laboratory (Fermilab) in Illinois, is now operating at full power, probing the very nature of space-time itself. "We want to find out whether space-time is a quantum system just like matter is," Craig Hogan, director of Fermilab's Center for Particle Astrophysics, said in a statement.

"If we see something, it will completely change ideas about space we've used for thousands of years. " The Looming Threat of "Generation Z" "Here Comes Generation Z," cheers a headline on Bloomberg View. 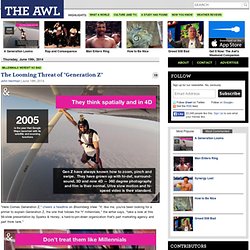 "If, like me, you've been looking for a primer to explain Generation Z, the one that follows the 'Y' millennials," the writer says, "take a look at this 56-slide presentation by Sparks & Honey, a hard-to-pin-down organization that's part marketing agency and part think tank. " This presentation is not a primer.

Nor is it a marketing deck, though that is its form. It is a stunning work of speculative fiction about a future that must be avoided at all costs. It imagines a generation defined exclusively in opposition to the ill-defined one that came before. Subconscious —Ayn Rand Lexicon. Your subconscious is like a computer—more complex a computer than men can build—and its main function is the integration of your ideas.

Who programs it? Your conscious mind. Spirit Science Video series. A wealth of information about Deep Web (56K WARNING; ALSO DISTURBING CONTENT) First of all, those of you who come across this post undoubtedly want to know just what the fuck the Deep Web is... 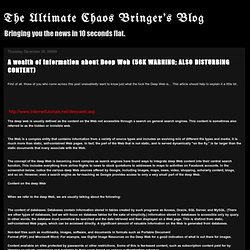 This article should help to explain it a little bit.. The deep web is usually defined as the content on the Web not accessible through a search on general search engines. This content is sometimes also referred to as the hidden or invisible web.The Web is a complex entity that contains information from a variety of source types and includes an evolving mix of different file types and media. It is much more than static, self-contained Web pages. John Lilly Vault : Omni Interview. Above the ranch-style dream houses and seafood restaurants along the Pacific Coast Highway the rugged, bleached Malibu canyons, twisting roads, dusty scrub oaks, and desert sagebrush speak a supernal language. 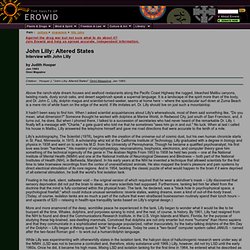 It is a landscape of the spirit more than of the body, and Dr. John C. Lilly, dolphin magus and scientist-turned-seeker, seems at home here -- where the spectacular surf down at Zuma Beach is a mere rim of white foam on the edge of the world. If life imitates art, Dr. Lilly should live on just such a mountaintop. Earth Coincidence Control Office - cancer consciousness. John Lilly, Ketamine and the Entities from ECCO by Adam Gorightly. - by Adam Gorightly (exclusive to ConspiracyArchive.com) In the early 70's, John Lilly was introduced to the drug Ketamine by Dr. 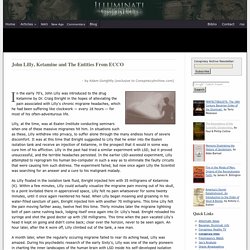 Craig Enright in the hopes of alleviating the pain associated with Lilly's chronic migraine headaches, which he had been suffering like clockwork — every 18 hours — for most of his often-adventurous life. Lilly, at the time, was at Esalen Institute conducting seminars when one of these massive migraines hit him.