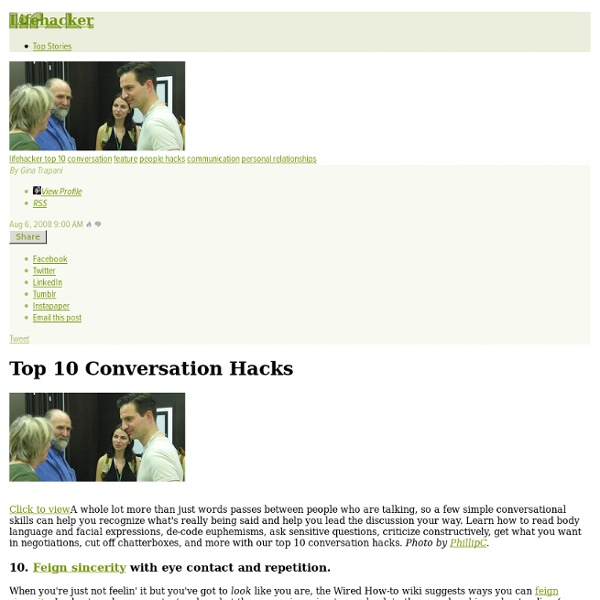 SExpand Click to viewA whole lot more than just words passes between people who are talking, so a few simple conversational skills can help you recognize what's really being said and help you lead the discussion your way. Learn how to read body language and facial expressions, de-code euphemisms, ask sensitive questions, criticize constructively, get what you want in negotiations, cut off chatterboxes, and more with our top 10 conversation hacks. Photo by PhillipC. 10. Feign sincerity with eye contact and repetition.

HOW TO CHEAT AT EVERYTHING Over lunch with Simon Lovell, a fascinating former card shark, Allison Schrager learns all sorts of things about how swindlers operate ... Special to MORE INTELLIGENT LIFE "I can spot someone's weakness a mile away. In any room I can pick out the best target," says Simon Lovell, reformed con artist and famed magician, when asked over lunch about the root of his talents. "Take that woman over there." He motions across the room towards a lady speaking to a man engrossed in his menu--"vulnerable, needy, looking for attention from the man she is with, but he won't give it to her.

How Not To Suck At Socializing – Do’s & Don’ts - Stepcase Lifehack Being socialable is a very easy thing to do, and it shouldn’t be something you’re either good at or not. You can learn to become a more social person – if you want to. Generally extroverts will have less trouble getting out and talking to new people, but that’s to be expected. Don’t think, however, that outgoing people don’t make mistakes either. There are ways to make life easier while you’re out and about. Body Language and Flirting Interesting Info -> Body Language -> Flirting Body Language (part 1) Quick Jump: General Signs of Flirting | Male Flirting | Female Flirting Also See: Body Language Resources | Decoding Male Body Language Updated March 21st - 2012. New resources, information, books and links added. Only 7% of communication is verbal communication.

#53 – How to detect bullshit By Scott Berkun, August 9, 2006 Everyone lies: it’s just a question of how, when and why. From the relationship saving “yes, you do look thin in those pants” to the improbable “your table will be ready in 5 minutes”, manipulating the truth is part of the human condition. Accept it now. I’m positive that given our irrational nature and difficultly accepting tough truths, we’re collectively better off with some of our deceptions.

How to find true friends (and love) in 45 minutes David Rowan Editor of Wired magazine This article was featured in Times Magazine, 5 November. Perfect Persuasive Messages Craft messages that change minds using these 20 principles of persuasion, all based on established psychological research. Perfection is hard to achieve in any walk of life and persuasion is no different. It relies on many things going just right at the crucial moment; the perfect synchronisation of source, message and audience. But even if perfection is unlikely, we all need to know what to aim for. To bring you the current series on the psychology of persuasion I’ve been reading lots of research, much more than is covered in recent posts.

Men's Body language for Flirting, Step 1. Male Body language secrets for reading friends and lovers. Male Flirting body language secrets revealed step 1. How to Use Body Language to Get What You Want This is all based on what researchers discovered worked best in today's western cultures. Here are the successful tactics used for men who captured the attention of their desired woman. In these 5 webpages we will give you the five steps to help you get what you want, too. The five steps outlined here are greatly influenced by the tactics that have worked for men's millions of ancestors. The modern environments are new but the basic five steps have worked for several million years.

Build a Better Social Life: 8 Tips From Wayne Dyer Best Selling author and motivational speak, Dr. Wayne Dyer, reveals his "Eight Tips To Build A Better Social Life". There's some good and practical advice in here that we feel is worth taking a look at. by Henrik Edberg “Stop acting as if life is a rehearsal.