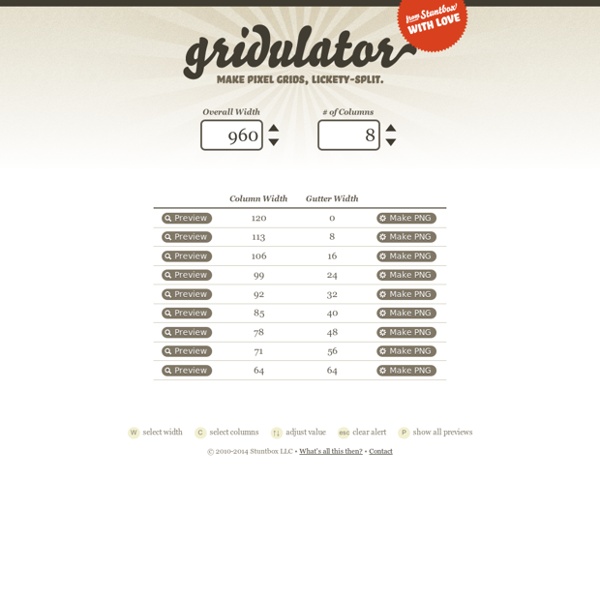 Don't Overthink It Grids The vast majority of websites out there use a grid. They may not explicitly have a grid system in place, but if they have a "main content area" floated to the left a "sidebar" floated to the right, it's a simple grid. If a more complex layout presents itself, people often reach for a grid framework. Create Something. Donate Login Remember Me Create An Account Forgot Password List of XML and HTML character entity references Although in popular usage character references are often called "entity references" or even "entities", this usage is wrong.[citation needed] A character reference is a reference to a character, not to an entity. Entity reference refers to the content of a named entity.

Inkscape vs. Illustrator: Which is Better for You? Which Has Better User Suport - Inkscape or Illustrator? Another commonly argued point in the Inkscape vs. Illustrator debate is the potential for User Support. Should something go wrong, and you require product support, Illustrator's support is buried in a sea of information. (Initially, I didn't think it had its own support page, but it does.) Once you do arrive at the Illustrator help and support page, you can find tutorials and blogs talking about different things you can do in Illustrator, as well as issues resolutions. Responsive Grid Frustrations - Susy, Zen and sub-pixel rounding - benfrain.com - blog of technology writer and web designer Ben Frain. The issues I’m about to describe aren’t particular to grid systems, these ‘sub-pixel’ rounding errors can affect any layout you want to work cross browser. I’m also not picking on IE here, this issue is exhibited when comparing the latest builds of Firefox, Safari and Chrome… Be aware that now, as of V1.06/March 2013, Susy also provides a mixin (@isolate-grid) to create container relative elements (if you don’t understand that already, read the post in full and you will). Therefore check out the Susy docs.

51 Web Apps for Web Designers and Developers – Web.AppStorm Web design and development has significantly changed over the years, as have the tools and technologies involved. With these advancements come tools to make our lives easier, provide higher quality work and better services for our clients. Communication and collaboration over vast distances is no longer painfully frustrating (or impossible) and project or task management is now easier than ever. Web designers and developers can also jump on virtually any internet connected computer with a modern browser to get work done without their main desktop applications. Wireframe, design, test, develop, deploy and so much more, straight from the web. How To Advertise On Pinterest [GUIDE] As Pinterest continues its rapid growth, quadrupling from 9 to 40 million users in 2012, many businesses and marketers are struggling to maximize their brands’ potential on the site. And with consumer pins and repins climbing into the hundreds of millions, the opportunity for advertisers to reach new audiences is enormous. Pinterest by the Numbers Pinterest’s traffic increased by a staggering 5,124% from 2011 to 2012! What also has advertisers foaming at the mouth is that Pinterest buyers tend to spend more and purchase at greater frequencies than users from the other top 5 major social sites. And traffic from Pinterest produces 4x the revenue-per click than Twitter.

CFL Mercury Light Bulbs Claim: Energy-saving light bulbs (CFLs) release dangerous amounts of mercury when broken. Example:[Farah, 2007] WASHINGTON — Brandy Bridges heard the claims of government officials, environmentalists and retailers like all pushing the idea of replacing incandescent light bulbs with energy-saving and money-saving compact fluorescent lamps. So, last month, the Prospect, Maine, resident went out and bought two dozen CFLs and began installing them in her home. Grid System Just copy the file _UnitGS.scss from GitHub to your Sass directory and start using the grid. The UnitGS uses Sass, to setup it up go here. Even better with Compass. Clean project? Don't have time to learn about all the html best practices, no problem, make your site HTML5 and CSS3 ready with HTML5 Boilerplate.

45 Excellent Free Web Templates Learn how to earn $125 or more per hour as a freelancer - Click Here Looking for hosting?. We recommend MediaTemple for web hosting. Use Code MTLOVESDESIGN for 20% off Free Design Templates don’t have to be ugly, cluttered,and boring, Some web-sites offer high quality templates for free you can use them for your personal and commercial projects without any restrictions.

Welcome to the 1Password extension! Since you’re reading this, you have successfully installed the 1Password extension. Nice work! Here’s a quick introduction to the basics of using it. Getting started with 1Password is easy! You can: How To Embed Practically Anything On Your Blog or Website If you want the hands-down, easiest way to embed practically anything on your blog or website, have we got a tool for you! The nature of the web is such that sharing and republishing content is common — and often even encouraged. The problem is, we increasingly store bits of our data on various services scattered across the web. Aggregating that content into one centralized personal hub can be time consuming — requiring user to manually copy text and links or upload files and photos — or fiddling with RSS feeds trying to make content automagically appear. Twitter released a very cool tool to allow publishers to embed tweets in their blog posts, but the process is overly complex for most users, with plugins needed to streamline the process.

Salsa - Syntactically Awesome Layout System... Awesome! NOTE - Salsa was merged into Susy v2.x which is going to include all of Salsa's features and much more. See this demo page for some examples. CSS grid systems are nice, but we can do so much better... Salsa is a Sass based layout system that allows you to: