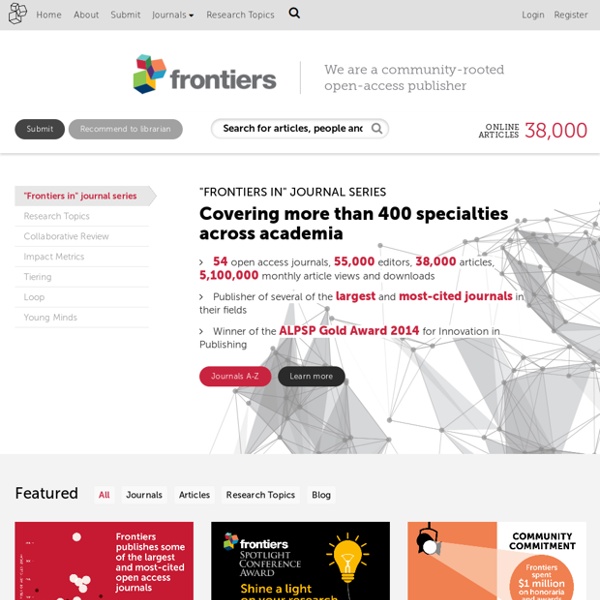 Massive open online courses in public health Massive open online courses (MOOCs) represent a new and potentially transformative model for providing educational opportunities to learners not enrolled in a formal educational program... A guide to bioinformatics for immunologists Bioinformatics includes a suite of methods, which are cheap, approachable, and many of which are easily accessible without any sort of specialized bioinformatic training. Yet, despite this, bioinformatic tools... Retrograde Signaling in Plants

The Quest For Gnosis — Gabriel D. Roberts Those who have read my other works know that I came from fundamentalist Christian background; a mindset that clearly set boundaries of what I should and should not believe. This book may touch on some of those ideas in conversation, but will not be the primary focus here, instead the focus is upon equipping you with a new sense of wonder and understanding of just how big this omniverse is and just how amazing a part of it you can be. Though you will find the definition to vary within the pages of this book, the term Gnosis in its most basic form simply means knowledge. Going more deeply Gnosis means intrinsic knowledge of a mystical nature; something that is personal and experiential. It is my opinion that the best way to understand something is to take a hands on approach to its investigation, not taking other people’s word for it.

Research Update:Black Sesame or Sesamum indicum L.MDidea-Extracts Professional.R067. Contents Research Update:Black Sesame or Sesamum indicum L.: Flavones from flowers of Sesamum indicum. Altered auditory and multisensory temporal processing in autism spectrum disorders Leslie D. Kwakye1,2, Jennifer H. Foss-Feig3, Carissa J. Cascio2,3,4,5, Wendy L. Information Philosopher - Introduction Introduction The Information Philosopher has established that quantum mechanics and thermodynamics play a central role in the creation of all things. This finding has enormous implications for philosophy and metaphysics. Naturally Good Magazine <A HREF="images/cover.jpg"> Heal thyself! Naturally Good Magazine is the do-it-yourself guide to maintaining health, preventing disease, nutrition, detoxification, and curing disease naturally with God's medicines. Throughout our pages, we provide you with the well-researched truth about health care, in order to help you to help yourself. No other magazine so candidly writes about managing your health and treating diseases, because they are afraid of retribution, or they are too invested with their sponsors. We are not afraid, and we have no integrity compromising entanglements.

In your eyes only: deficits in executive functioning after frontal TMS reflect in eye movements Mathias Lüthi1,2, Katharina Henke2,3, Klemens Gutbrod1,2, Thomas Nyffeler1,2,4, Silvia Chaves1,2 and How the Starfish Prime Nuclear Bomb Worked – blowing up the radiation belts for science by Marshall Brain | July 2, 2010 Imagine you are a scientist. In 1958 there is a big discovery – some of the very first satellites launched by the United States discover the Van Allen radiation belts. Over the next couple of years they are further studied and characterized by more satellites.

The 5 Most Profitable Drugs They Never Cure You - New York News - Runn (...) In this week's cover story, writer Keegan Hamilton investigates the controversy surrounding ibogaine, the experimental hallucinogen drug that has helped kick meth and heroin addictions. Ibogaine is illegal, even though its power to cure addicts has been proven. Hamilton's story describes the many reasons the medical establishment and the government are wary of Ibogaine, despite its benefits, but one of them really stood out: Because Ibogaine is an outright cure, drug companies want nothing to do with it.