How Axions May Explain Time’s Arrow. Few facts of experience are as obvious and pervasive as the distinction between past and future. 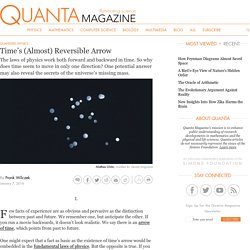 We remember one, but anticipate the other. If you run a movie backwards, it doesn’t look realistic. We say there is an arrow of time, which points from past to future. Why is the speed of light the speed of light? — Aeon... If you visit the Paris Observatory on the left bank of the Seine, you’ll see a plaque on its wall announcing that the speed of light was first measured there in 1676. 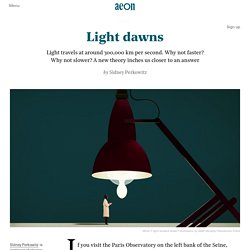 The odd thing is, this result came about unintentionally. Ole Rømer, a Dane who was working as an assistant to the Italian astronomer Giovanni Domenico Cassini, was trying to account for certain discrepancies in eclipses of one of the moons of Jupiter. Rømer and Cassini discussed the possibility that light has a finite speed (it had typically been thought to move instantaneously). 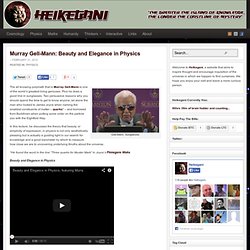 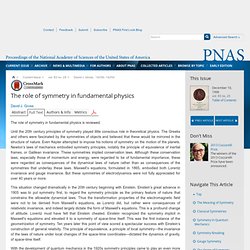 Until the 20th century principles of symmetry played little conscious role in theoretical physics. The Greeks and others were fascinated by the symmetries of objects and believed that these would be mirrored in the structure of nature. Even Kepler attempted to impose his notions of symmetry on the motion of the planets. Newton’s laws of mechanics embodied symmetry principles, notably the principle of equivalence of inertial frames, or Galilean invariance. These symmetries implied conservation laws. This situation changed dramatically in the 20th century beginning with Einstein. Mathematicians Chase Moonshine, String Theory Connections. In 1978, the mathematician John McKay noticed what seemed like an odd coincidence. 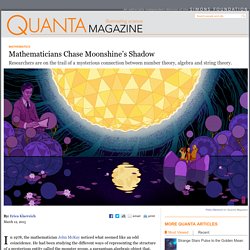 He had been studying the different ways of representing the structure of a mysterious entity called the monster group, a gargantuan algebraic object that, mathematicians believed, captured a new kind of symmetry. Mathematicians weren’t sure that the monster group actually existed, but they knew that if it did exist, it acted in special ways in particular dimensions, the first two of which were 1 and 196,883. McKay, of Concordia University in Montreal, happened to pick up a mathematics paper in a completely different field, involving something called the j-function, one of the most fundamental objects in number theory. Strangely enough, this function’s first important coefficient is 196,884, which McKay instantly recognized as the sum of the monster’s first two special dimensions.

Tanja Kernweiss. Noether's theorem is a tautology. Return to homepage by Miles Mathis Noether’s Theorem claims to find a justification for conservation laws in symmetries. 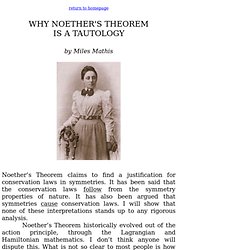 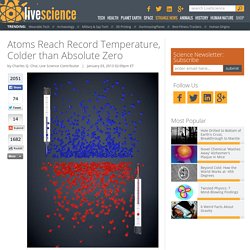 But now researchers show they can achieve even lower temperatures for a strange realm of "negative temperatures. " Oddly, another way to look at these negative temperatures is to consider them hotter than infinity, researchers added. This unusual advance could lead to new engines that could technically be more than 100 percent efficient, and shed light on mysteries such as dark energy, the mysterious substance that is apparently pulling our universe apart. Antihydrogen Trapped For 1000 Seconds. Antihydrogen is rare in our part of the Universe. Indeed, it was only last year that scientists at CERN’s Antihydrogen Laser Physics Apparatus (ALPHA) managed to trap a significant amount of the stuff for the first time, albeit only 38 antiatoms for just 172 milliseconds. 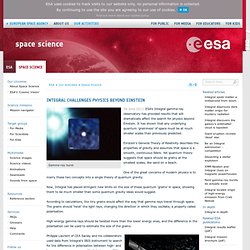 It has shown that any underlying quantum ‘graininess’ of space must be at much smaller scales than previously predicted. Eric Weinstein may have found the answer to physics' biggest problems. Two years ago, a mathematician and physicist whom I've known for more than 20 years arranged to meet me in a bar in New York. 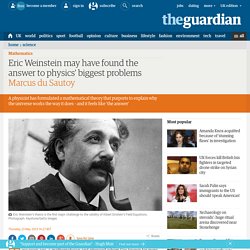 What he was about to show me, he explained, were ideas that he'd been working on for the past two decades. As he took me through the equations he had been formulating I began to see emerging before my eyes potential answers for many of the major problems in physics. It was an extremely exciting, daring proposal, but also mathematically so natural that one could not but feel that it smelled right.

Researchers find what may be a new state of matter. Think way back to elementary or primary school, somewhere around third-grade physical science, when you first learned about the various states of matter. 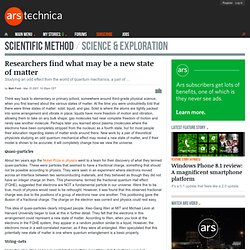 At the time you were undoubtedly told that there were three states of matter: solid, liquid, and gas. Solid is where the atoms are tightly packed into some arrangement and vibrate in place; liquids have more freedom of motion and vibration, allowing them to take on any bulk shape; gas molecules had near complete freedom of motion and rarely saw another molecule. Perhaps later you learned about plasma (molecules where the electrons have been completely stripped from the nucleus) as a fourth state, but for most people their education regarding states of matter ends around there. New work by a pair of theoretical physicists studying an odd quantum mechanical effect may reveal a new state of matter, and if their model is shown to be accurate, it will completely change how we view the universe.

Quasi-particles String-nets. The universe is a string-net liquid. New Scientist published an article about string-net theory and unification of light and electrons. Intr.pdf (application/pdf Object) Strange Computer Code Discovered Concealed In Superstring Equations! Pioneering Physicist John Wheeler Dies at 96. Editor's Note: Yesterday morning, renowned physicist John Archibald Wheeler died of pneumonia. He was an iconic figure: a veteran of the Manhattan Project, a pioneer of the search for a quantum theory of gravity, and an originator of such evocative terms as "black hole. " Most physics students know him as co-author of the standard textbook on Einstein's general theory of relativity—a tome that defies almost every stereotype of a textbook, much as Wheeler's own career defied almost every generalization. He was rigorous yet playful, and he always had a pithy, Zen-like phrase for profound ideas and questions: "it from bit," "mass without mass" and "Why the quantum?

". An out-of-the-box thinker who wasn't afraid to speculate, he always carefully identified speculation as such. Leonard Susskind’s Online Lectures. The Feynman Lectures on Physics. The Higgs Boson Explained. What Today's Higgs Boson Discovery Really Means. The boson series, in short and somewhat muddied recollection of the subject.

Please do your own research if you want a fully accurate description, google and wikipedia are great places to start, cassiopea project has a video series on the standard model that explain it pretty well too. The term 'boson' is a concatenation of Bose-Einstein, representing physical properties which are very alien to what we normally observe. Ten Lessons from the Standard Model - The Nature of Reality — The Nature of Reality. The most recent Nobel Prize in physics, awarded to Francois Englert and Peter Higgs for the prediction of the Higgs boson, marks the apotheosis of the Standard Model in two ways. First, the Higgs particle is a milestone in itself: It is the last ingredient required to complete the Standard Model. But second, and more profoundly, the discovery process bore witness to the extraordinary power of the Standard Model. Higgs particles are rare and fleeting visitors to our world.

Even at the Large Hadron Collider (LHC), where the discovery was made, they are produced in less than a billionth of all collisions. When they are produced, they quickly decay, leaving behind just a few extra tracks among hundreds of others from more conventional sources. After this crowning triumph it seems appropriate to reflect on the big picture. To answer that, I’ve adopted the List of Ten format pioneered by God and copied by Letterman and the “For Dummies” series.

Subatomic calculations indicate finite lifespan for universe. What is a Higgs Boson? ‘Penguin’ Anomaly at Large Hadron Collider Hints at Missing Particles. A penguin-shaped anomaly first detected two years ago has survived a comprehensive new analysis of data from the first run of CERN’s Large Hadron Collider (LHC), scientists revealed today at a meeting in La Thuile, Italy. On the Origin of Gravity and the Laws of Newton. Physicists identify molecules by vibrational signatures. Professor Wilson Ho, center, and graduate students Mohammad Rezaei, left, and Barry Stipe show off their "homemade" scanning tunneling microscope in a basement laboratory in Clark Hall. The instrument, enclosed in a vacuum chamber and cooled by liquid helium, is precise enough to resolve parts of molecules. Frank DiMeo/University Photography By Bill Steele. Ramesh Raskar: Imaging at a trillion frames per second.