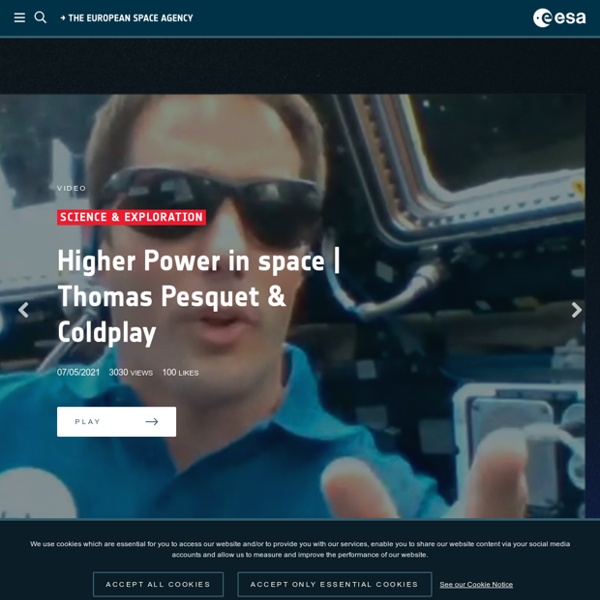 Aerogel A block of aerogel in a person's hand Aerogel was first created by Samuel Stephens Kistler in 1931, as a result of a bet with Charles Learned over who could replace the liquid in "jellies" with gas without causing shrinkage.[3][4] IUPAC definition Weekend Feature: NASA-ESA Announce Europa Mission -Search for Life on Jupiter's Water Worlds With input from scientists around the world, American and European scientists working on the potential next new mission to the Jupiter system have announced their joint vision for the Europa Jupiter System Mission to explore "the emergence of habitable worlds around gas giants." The proposed Europa Jupiter System Mission would provide orbiters around two of Jupiter's moons: a NASA orbiter around Europa called the Jupiter Europa Orbiter, and an ESA orbiter around Ganymede called the Jupiter Ganymede Orbiter. "We've reached hands across the Atlantic to define a mission to Jupiter's water worlds," said Bob Pappalardo, the pre-project scientist for the proposed Jupiter Europa Orbiter, who is based at NASA's Jet Propulsion Laboratory. "The Europa Jupiter System Mission will create a leap in scientific knowledge about the moons of Jupiter and their potential to harbor life." Most scientists believe that the subEuropan seas are locked under tens of kilometers of ice.

The Heliosphere is Tilted - implications for the 'Galactic weather forecast'? Supersonic shock waves detected at the edge of the Solar System - a new study by European scientists clarifies conditions at our Earth's outermost shield against interstellar charged particles. The local interstellar cloudOur Solar System entered an interstellar cloud 10,000 years ago. Today it is speeding through this nebulosity at Mach 2 behind a supersonic shock wave - in much the same way that a Concorde crosses the Atlantic at supersonic speed. Since its formation 4.6 billion years ago our Solar System has encountered numerous interstellar clouds, knots, filaments, shells and bubbles of different sizes and contents on its path through the Milky Way. For more than 80 years astronomers have been attracted by these past and future encounters, have tried to understand the physics behind them in order to decipher the dynamic interplay between the interstellar material and the Solar System.

NASA Supermassive-Black-Hole Gravity Discovery: "Confirms Einstein's Theory of Space-Time" Two X-ray space observatories, NASA's Nuclear Spectroscopic Telescope Array (NuSTAR) and the European Space Agency's XMM-Newton , have teamed up to measure definitively, for the first time, the spin rate of a black hole with a mass 2 million times that of our sun that lies at the dust- and gas-filled heart of a galaxy called NGC 1365 (image above). Measuring the spin of a supermassive black hole is fundamental to understanding its past history and that of its host galaxy. The observations are a powerful test of Einstein's theory of general relativity, which says gravity can bend space-time, the fabric that shapes our universe, and the light that travels through it. The supermassive black hole is spinning almost as fast as Einstein's theory of gravity will allow.

Discover an exoplanet : the transit method Unveil an extrasolar planet by observing the light intensity emitted by its mother star An extrasolar planet, or exoplanet, is a planet outside the Solar System. Until March 2012, astronomers have made detections of 762 exoplanets (see for a complete and detailed catalog). The vast majority of them has been observed through radial velocity and transit observations but other indirect methods also exist : astrometry, microlensing and timing among them. At present, direct imaging is still difficult, even if lots of progress is being made. Anyway, most of the discoveries are about giant planets, thought to resemble to giant Jupiters, orbiting near to their stars, where they are more easy to detect.

Howie Green Gallery: Fritz Trautmann - Personal Rhythms Personal Rhythmsby Fritz Trautmann When man feels his own personal rhythms vibrating in tune with the forces playing upon him, he calls the experience "Beauty." It may happen on the plane of the senses, on the level of the intellect, in the depths of his affections, or at the exalted heights of spiritual insight, but wherever met and however designated, it is - of its kind - a response to this sense of beauty. As sensory experience - described as savory or delicious, handsome or pretty, harmonious or melodic, soothing, exhilarating, aromatic or fragrant - it is Pleasure. To the intellect - when it is consistent, functional or logical it is Truth. To the heart - when sympathetic, compassionate or loyal it is Love.

NASA spacecraft due for rendezvous with comet Tempel 1 It's not exactly young love, but some might find it romantic. On Valentine's Day, an aging Lothario that has been flitting from beauty to beauty through the solar system will make his final stop, taking pictures of a battered dowager to send to the folks back home before disappearing forever. The Stardust spacecraft, which has already taken images of asteroid Annefrank and captured interstellar dust from comet Wild 2, on Monday night will swing by comet Tempel 1. There, it will take new pictures of the devastation wrought on the comet by NASA's 2005 Deep Impact mission.