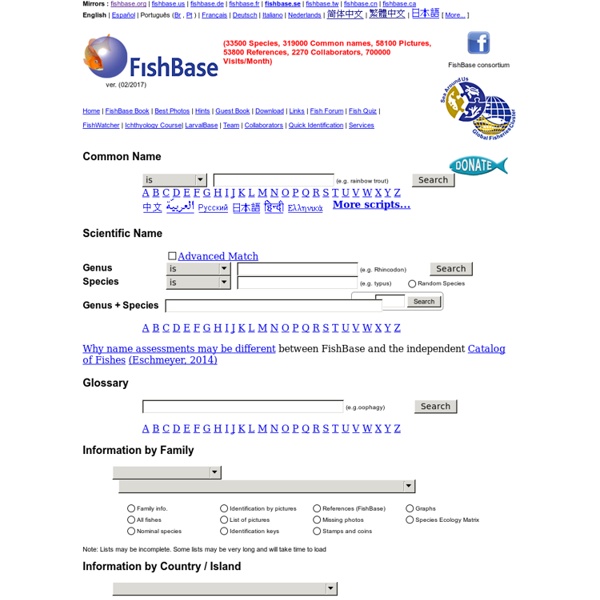 Associated Journal Publish in our journal partner Acta Ichthyologica et Piscatoria the results of your primary research on fishes about growth, weight-length relationships, reproduction (maturity, fecundity, spawning), food and diet composition, introductions and range extensions for faster subsequent entry in (2011 impact factor: 0.547). Indexed Journal Cybium (publisher: SFI, Société Française d’Ichtyologie) For journal editors: Would you wish that your journal were indexed in FishBase, please contact our librarian. References Citing FishBase How to cite FishBaseTo give due credit to the original authors, please cite data taken from FishBase by Main Ref. and/or Data Ref. of the respective record. Cite FishBase itself asFroese, R. and D. DisclaimerFishBase present information on fishes as correctly as possible. Copyright This work is licensed under a Creative Commons Attribution-Noncommercial 3.0 Unported License.

"The World Tree of Consciousness." Perhaps one of the best known representative of the concept of the World Tree is the Yggdrasil of ancient Norse lore. We still know a great deal about this concept, because unlike most other ancient lore, it persisted until some time after writing was developed by the Norse people. We therefore have access to written records that describe the Yggdrasil and relate to the myths and legends that surround it. The main body of these writings is contained in the Prose Edda of Snorri Sturluson (c.1179-1241), an Icelandic historian who is considered the most accurate editor, redactor and interpreter of old Norse mythology. In the legend the Yggdrasil is composed of nine words, of which Midgardhr, which represents the world in which we live, is the central one. The eight other nonphysical worlds are arranged above, below, east, west, north and south of Midgardhr, and are supported by the trunk and the branches of Yggdrasil.

Something Really, Really Terrible Is About to Happen to Our Coral Coral reefs cover just 0.1 percent of the ocean floor, but provide habitat to 25 percent of sea-dwelling fish species. That's why coral scientist C. Mark Eakin, who coordinates the National Oceanic and Atmospheric Administration's Coral Reef Watch program, is surprised that the warning he has been sounding since last year (PDF)—that the globe's reefs appear to be on the verge of a mass-scale bleaching event—hasn't drawn more media attention. WikiGenes - Collaborative Publishing <div id="noscriptMsg"><h1>Javascript disabled</h1><p> Please enable Javascript support in your browser to use this application. </p><p> Instructions on how to enable JavaScript on different browsers can be found here: <a target="_blank" href=" </p></div> Search thousands of genes, chemicals, pathologies and much more...

Carassius auratus Carassius auratus [edit] Familia: Cyprinidae Subfamilia: Cyprininae Genus: Carassius Species: Carassius auratus Name[edit] Bullet Journal Instructions – Bullet Journal Now what? Congratulations, you’ve made it all the way through! Start by getting a notebook and trying out the system for a least two months. Also, check out the Bulletjournalist Blog and the Library. Lastly, sign up for the newsletter. Who, what, where etc… efloraofindia efloraofindia (eFI in short) website is documenting flora of India that is being discussed on efloraofindia google e-group along with supplementing the working of the group. It has the largest database on net on Indian Flora with more than 10,000 species (along with more than 2,00,000 pictures, from some of the best Flora Photographers of India, at its efloraofindia e-group links). It also includes some species from around the world, which has been posted by our members.

Determinants of genetic diversity : Nature Reviews Genetics Genetic polymorphism varies among species and within genomes, and has important implications for the evolution and conservation of species. The determinants of this variation have been poorly understood, but population genomic data from a wide range of organisms now make it possible to delineate the underlying evolutionary processes, notably how variation in the effective population size (Ne) governs genetic diversity. Comparative population genomics is on its way to providing a solution to 'Lewontin's paradox' — the discrepancy between the many orders of magnitude of variation in population size and the much narrower distribution of diversity levels.

The Largest Plant Identification Reference Guide - Dave's Garden PlantFiles is the largest plant database in the world, with information and photos for 210,070 different plants! View our 365,378 images and read our 138,488 detailed and helpful comments. Search for a plant by its common or botanical name using the green button below, or scroll down the page and browse through hundreds of popular cultivars, or search for plants by their characteristics (height, hardiness, etc.) Discover which plants grow well in your area, and which plants to avoid. A comparison of tools for the simulation of genomic next-generation sequencing data : Nature Reviews Genetics Computer simulation of genomic data has become increasingly popular for assessing and validating biological models or for gaining an understanding of specific data sets. Several computational tools for the simulation of next-generation sequencing (NGS) data have been developed in recent years, which could be used to compare existing and new NGS analytical pipelines. Here we review 23 of these tools, highlighting their distinct functionality, requirements and potential applications. We also provide a decision tree for the informed selection of an appropriate NGS simulation tool for the specific question at hand. Figures Read the full article

Trees of Life: A Visual History of Scientific Diagrams Explaining Evolution by Maria Popova Mapping 450 years of humanity’s curiosity about the living world and the relationships between organisms. Since the dawn of recorded history, humanity has been turning to the visual realm as a sensemaking tool for the world and our place in it, mapping and visualizing everything from the body to the brain to the universe to information itself. Trees of Life: A Visual History of Evolution (public library) catalogs 230 tree-like branching diagrams, culled from 450 years of mankind’s visual curiosity about the living world and our quest to understand the complex ecosystem we share with other organisms, from bacteria to birds, microbes to mammals. Theodore W. Pietsch writes in the introduction: