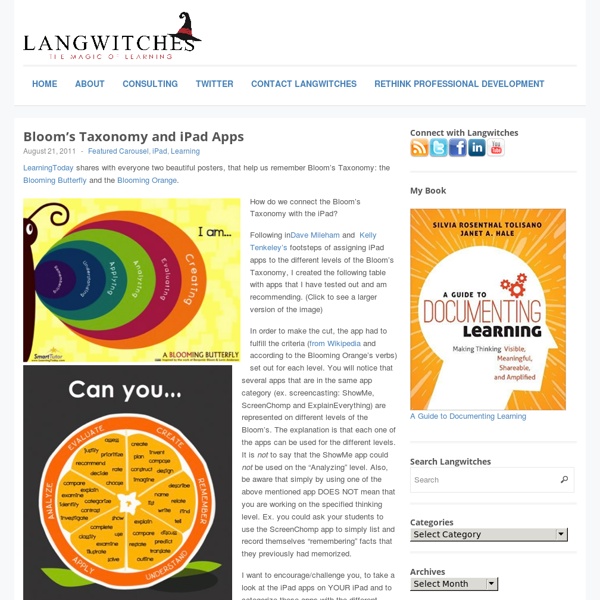 LearningToday shares with everyone two beautiful posters, that help us remember Bloom’s Taxonomy: the Blooming Butterfly and the Blooming Orange. How do we connect the Bloom’s Taxonomy with the iPad? Following inDave Mileham and Kelly Tenkeley’s footsteps of assigning iPad apps to the different levels of the Bloom’s Taxonomy, I created the following table with apps that I have tested out and am recommending. (Click to see a larger version of the image) In order to make the cut, the app had to fulfill the criteria (from Wikipedia and according to the Blooming Orange’s verbs) set out for each level. You will notice that several apps that are in the same app category (ex. screencasting: ShowMe, ScreenChomp and ExplainEverything) are represented on different levels of the Bloom’s. I want to encourage/challenge you, to take a look at the iPad apps on YOUR iPad and to categorize these apps with the different thinking levels and THEN take the next step to SHARE your list with other educators.

Allan's Blog Fourni par Traduction DOWNLOAD THE LATEST VERSION: V4 published Mar 2015. This PDF Poster has links to 122 of the latest and most popular educational apps. Now these resources are available in 19 different languages. The 32 Totally Essential (and Free) Apps for Every New PC You have to admit, Windows is a pretty barebones operating system, feature-wise. After a fresh install of XP or Vista (perhaps following a Clean Start), you're faced with a barren Start Menu and an empty desktop that's beaming with limitless potential. The problem is that it's up to you to hunt and download those applications that you really need in your day-to-day computing experience. And chances are, it's often difficult to find good software that's also free. That's where this guide comes in. We've put together a list of what we think are the most essential PC apps for every Maximum PC reader.

iPad Applications In Bloom’s Taxonomy This has bubbled up in my feeds not once, but several times now. It’s an interesting graphic that actually places example iPad applications into Bloom’s levels of performance in the cognitive domain. Focussed around students, and not really workplace learning, but interesting nonetheless. Check it out. October 2 & 3 (NEC Birmingham), Booth #D250 | Register (Free) Leave a Reply 50 resources for iPad use in the classroom The transition to the more extensive use of technology in classrooms across the West has resulted in the integration of bring your own device (BYOD) schemes, equipping students with netbooks and tablet computers, and lessons that use social media & online services. Gesture-based technology is on the rise; according to the latest NMC Horizon Report, gesture-based technological models will become more readily integrated as a method of learning within the next few years. The iPhone, iPad, Nintendo Wii and Microsoft Xbox 360 Kinect technology are examples of these kinds of developments, and in particular, resources for Apple products in education are becoming widely available online.

New Padagogy Wheel Helps You Integrate Technology Using SAMR Model Sometimes a visual guide comes along and it just makes total sense. That’s how I felt about Allan Carrington’s clever ‘Padagogy Wheel‘ which we featured on Edudemic last week. Check out the previous version then view the one below to see the differences. From what I can tell, putting the wheel on this site has generated a bit of buzz and I’m glad we could help spread the knowledge. But I was quite amazed this morning when I saw that the Padagogy Wheel had been updated. Now at version 2.0, it features another band around the edge focusing on the SAMR Model and on helping teachers (and admins) effectively integrate education technology.

Writing Your First Android App - Body Mass Index Calculator This tutorial will guide you to write a simple Android app using the available button and text widgets. What our app will do is ask user for his weight and the height and calculate the Body Mass Index (BMI) for him with the information that whether the user is underweight, normal or overweight. 1. Create the Eclipse Project for the Android App First make sure you have installed the Android Development Tools by following my previous blog post, Installing Android Development Tools in Windows. After the setup, start eclipse, and click the menu File->New->Android Project. Bloomin' Apps This page gathers all of the Bloomin' Apps projects in one place.Each image has clickable hotspots and includes suggestions for iPad, Android, Google and online tools and applications to support each of the levels of Bloom's Revised Taxonomy.I have created a page to allow you to share your favorite online tool, iOS, or Android app with others. Cogs of the Cognitive Processes I began to think about the triangular shape of Bloom's Taxonomy and realized I thought of it a bit differently.Since the cognitive processes are meant to be used when necessary, and any learner goes in and out of the each level as they acquire new content and turn it into knowledge, I created a different type of image that showcased my thoughts about Bloom's more meaningfully.Here is my visual which showcases the interlocking nature of the cognitive processes or, simply, the "Cogs of the Cognitive Processes".

25 (more) clever ideas to make life easier . We heard you loud and clear. When we published our first list of clever ideas to make life easier last year, we received an overwhelming response. So without further ado, here’s another 25 ingenious household tips and organisational tricks that will have you saying, “Why didn’t I think of that?!” Source: chezerbey.com 4 Visual Guides To Bloom's Taxonomy Apps Yesterday, we looked at an overview of the old and revised versions of Bloom’s taxonomy . We talked a little bit about categorizing current classroom activities to see which of Bloom’s objectives you’re addressing (whether intentionally or unintentionally). Today, we’re looking at some apps and web tools that address the Bloom’s taxonomy objectives – helping bring Mr. Bloom into the 21st century. There are a ton of great lists out there that showcase many (many, many) apps and digital tools that address the objectives.

Open Web App The open Web is a great platform for rich applications. It would be even better if it had additional capabilities to ease discovery, acquisition, installation and use of apps, while also enabling monetization for developers. We designed and built a prototype of a system for open Web apps: Apps built using HTML/CSS/JavaScript that work both on computers and mobile phones, have many of the characteristics that users find compelling about native apps and provide developers with open and flexible distribution options. Today, we are releasing technical documentation of the proposed system and a developer preview prototype that allows you to install, manage and launch Web apps in any modern desktop or mobile browser (Firefox 3.6 and later, Firefox for mobile, Internet Explorer 8, Chrome 6, Safari 5, Opera 10 and WebKit mobile).

bloomsapps Using Blooms Taxonomy in education is a highly effective way to scaffold learning for the students. With the recent popularity and pervasive nature of iOS devices in school districts it is essential for educators to understand how to implement Blooms in the classroom using the apps that are available. While this list is by no means fully comprehensive, it will assist educators in getting started when implementing iOS devices in the classroom. This site will change almost daily as it will be updated with new and exciting apps! If you find any that you have worked with in your classroom please email dmileham@e1b.org or tweet @bloomsapps or @dmileham75 with your suggestions.